Three’s a Shroud resurrection a triumph 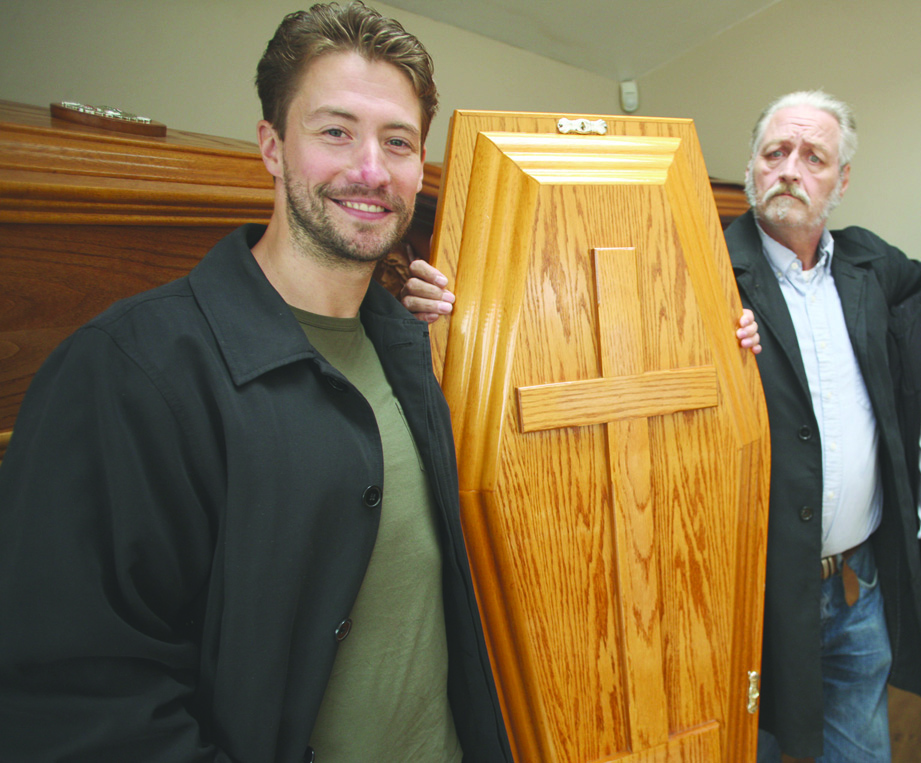 IT’S back on stage and it is better than ever before. Written by Stephen Large and directed by the multi-talented Martin Lynch, Three’s A Shroud examines the funny side of Belfast’s undertaking business and transforms the not so funny subject of death and religious rivalry into a barrel of laughs.
For years, veteran undertaker Gerry McSorley (played by the wonderful BJ Hogg, famous for his star role as Big Mervyn in Give My Head Peace) has buried only Catholics. “They bury theirs, we bury ours,” he says simply.
McSorley’s assistant is Poleglass lad Simon Doherty (Matthew McElhinney). Simon is a wannabe rapper who’s in the wrong job, because quite simply he’s disgusted at the very thought of preparing dead bodies for a funeral. The relationship between the two is fascinating and hilarious at the same time.
As the battle for business intensifies, Simon comes up with new and inventive ways of bringing Gerry’s business into the 21st century through the use of Facebook, an app to allow clients to track their loved ones from the morgue and live-streaming funeral services. His ideas and imagination are endless.
Funeral traditions go out the window when young Protestant undertaker Basil Gray (Shaun Blaney), who is more interested in courting widowed customers, comes along after taking over his late father’s business.
A special mention to Shaun for his acting out of famous movie scenes from ‘The Godfather’ to ‘Scarface’ whilst preparing bodies – it’s genius, and perhaps worth a play in itself.
Basil decides to break traditions, sparking a tit-for-tat rivalry between him and McSorley. It’s at this point Gerry turns to the Belfast Telegraph and News Letter for some Protestant customers.
A hilarious mix-up of ‘Here Lies A Soldier’ and the ‘Soldier’s Song’ at McSorley’s first attempt at a Protestant funeral spells the end of that.
The undertaking war then takes an unexpected twist as the rivals are caught cold by the introduction of a half-price, new-age, interdenominational funeral service, managed by young Polish woman Irena Bukowski (Nuala McGowan).
“Typical,” says Gerry McSorley, “coming over here taking our dead bodies” in one of many unforgettable lines in the comedy.
Irena’s new funeral service proves hugely popular in an age of austerity, forcing the Catholic and Protestant undertakers to put their rivalry aside to attempt to win back their customers, abandoning the usuns against themuns’ policy.
After a high profile republican and loyalist are killed, the three rival undertakers are forced together as one in a desperate bid to avoid the paramilitaries and, yes, death. Disaster surely beckons, or can they work together and dodge a bullet? I will say no more.
Three’s a Shroud is full of classic lewd, crude, rude and standard yet classic ‘Norn Iron’ humour that is expertly delivered by the impressive cast.
The play sees the actors skilfully play multiple roles, with a special mention for McGowan, who doubles up as Gerry’s cleaner, known for her hilariously foul-mouthed banter.
Spike, the UVF’s ‘community donations collector, (BJ Hogg) and Gusty Stitt’s son are wonderfully played also.
Three’s A Shroud reminds us of three things: we love to be offended, life is short and we are better united than divided.
The play is tribute to the rise of writer Stephen Large, who has shot to fame after creating the very funny Dundonald Liberation Army (DLA) page on Facebook, gaining 30,000 followers in no time.
As for GBL Productions and Martin Lynch, what more can you say in praise and admiration of one of the north’s most successful playwrights?
I can’t recommend this hilarious comedy enough.

Three’s A Shroud is at the Waterfront Hall until October 6. Tickets are available by calling 028 9033 4455, online at www.waterfront.co.uk and at the Box Office at the Ulster Hall.