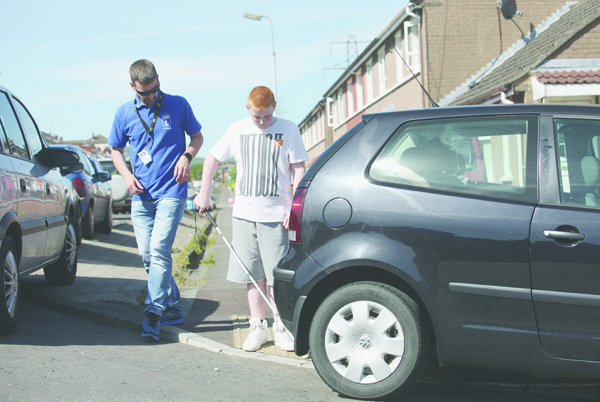 A BELFAST teenager has appealed for drivers to park on the roads instead of parking over tactile paving that has been installed at junctions for the blind and visually impaired.

13-year-old Tiernan Devine was born at 24 weeks weighing only 1lb 3oz. Throughout his life Tiernan has suffered various medical difficulties and has had to endure many surgeries. Three years ago the retina detached from his eyes and he completely lost his sight.

Tiernan and his family led a campaign with the support of local MLA Gerry Carroll to have tactile paving installed in their estate to enable Tiernan to have some sort of independence so he could even go to the shops by himself.

Tiernan, who is a pupil at Jordanstown School for deaf and blind children, had difficulties walking around his home area as he is afraid of tripping or falling. Having the paving installed did a lot for his confidence, but now careless drivers are parking their cars on the specially designed and manufactured paving stones, meaning that the blind and visually impaired have to walk around cars and at times on to the busy road to make their way through the streets.

Tiernan’s mum Therese said: “It’s hard enough for Tiernan as it is, trying to navigate his way about using his cane. His confidence was building up and he was actually venturing to the shop, but now not only are people driving over the top of the pavements and parking on them, their cars are cracking them.

“We have tried to explain to people what they are for, but drivers just don’t seem to care.

“He is terrified to go out now. He’s okay on his own street but other than that he’s too afraid to walk about. His sister Louise takes him everywhere, she’s his second mummy, he would be lost without her.”

Tiernan has the support of Pete Lock from Guidedogs NI. Tiernan said: “Pete is really important to me, he helps me with my cane and my independence, he’s my friend as well. He always helps me and brings me out, I just wish these drivers would just park on the road and not the pavement.:

Gerry Carroll said: “Initially we contacted the DRD about the tactile pavements and we were told there was no budget, but eventually it got sorted. And now for people to park up on and damage these pavements is wrong. There are a number of blind and visually impaired people in the local area and they depend on these pavements to get from A to B.”

A spokesperson for Guide Dogs NI said: “Getting tactile paving installed in the area around Tiernan’s home has given him more independence as it allows him to use his long cane to navigate to the nearby shops. However, if these ‘blister’ paving areas are obstructed by parked cars, Tiernan can’t find the crossing points to complete his journey safely.

“We’re urging drivers to think carefully about where they park and to leave enough space for two people to walk side-by-side along the pavement.

“This makes life easier for people with a visual impairment who use a cane, a dog or sighted guide, as well as wheelchair users and parents with prams. It will also avoid the risk of a fixed penalty notice being issued.

“We appreciate that parking space can be limited in residential areas. However, Tiernan’s story shows how important it is to remember that pavements are for people.”