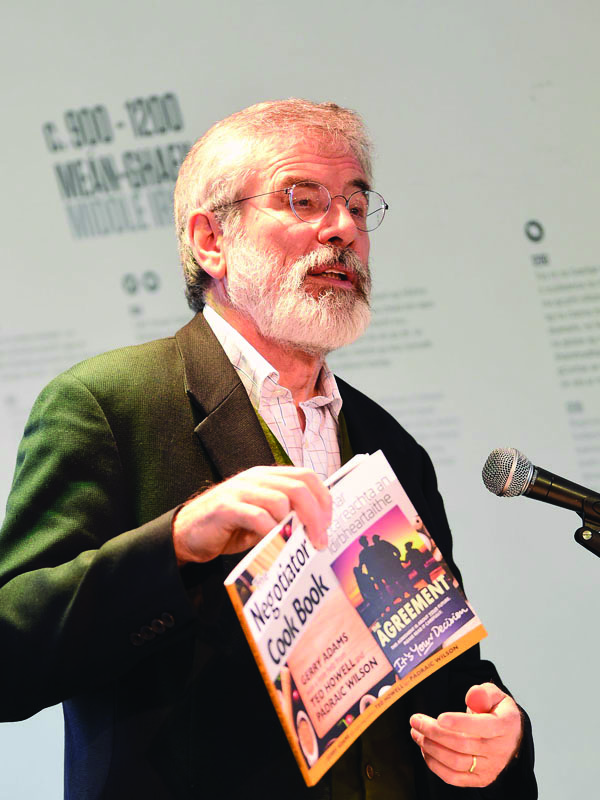 LONG Quiche, Come Out You Rack Of Lambs, The Frying Column and Turkey Ár Lá – these were just some of the frontrunners for the name of the new cookbook by former Sinn Féin President Gerry Adams, who finally settled on The Negotiators Cookbook – Best Kept Secret of the Peace Process.
The Negotiators Cookbook is the latest offering from Adams and it gives an insight into a part of the peace process that up until now has had little light shone upon it.
The book details the efforts of two of the insiders, Ted Howell and Pádraic Wilson, to sustain the stamina and energy of the Sinn Féin negotiating team during years of high level negotiations with the British government and includes many of their recipes.
Speaking at the launch in An Chultúrlann on Monday, Mr Adams said: “I’m here to tell you about one of the best kept secrets of the Irish peace process. When you bring together a group of hungry republicans they have to be fed, so who fed them? We fed ourselves.”
Describing the motivation behind the book, which is to be taken with a pinch of salt, Mr Adams said: “Although this is a serious cookbook it is also a bit of craic, all the recipes are well worn, tried and tested.
“In the course of the talks process and particularly when we returned to Stormont, the Sinn Féin team fed ourselves.
“The first time I met with the British Government was in London in 1972, myself and Martin McGuinness and others, we spent a lot of time sitting about strategizing, debating and discussing, the British were historically reluctant to feed any of the delegations.
“Sometimes when talks in Downing Street went on into the evening we persuaded Tony Blair to send out for pizzas or Chinese food. When we came back home Ted started bringing up bits and pieces of grub and that developed until we had our own diners club in room 316 (of Stormont).
“Pádraic then started bringing desserts, what I have done is to put those recipes together here.
“This is a fundraiser, the money goes to Sinn Féin, it’s out in time for Christmas, and I hope that you enjoy it, I certainly enjoyed putting it together.”
Gerry Adams then proceeded to hand out slices of pudding – drenched in alcohol – which he himself prepared earlier.
He added: “The book is dedicated to our negotiating team and particularly to Siobhán O’Hanlon who was a very central part of the team.”

The Negotiators Cookbook is available from sinnfeinbookshop.com and all good book shops, priced at £8.99.