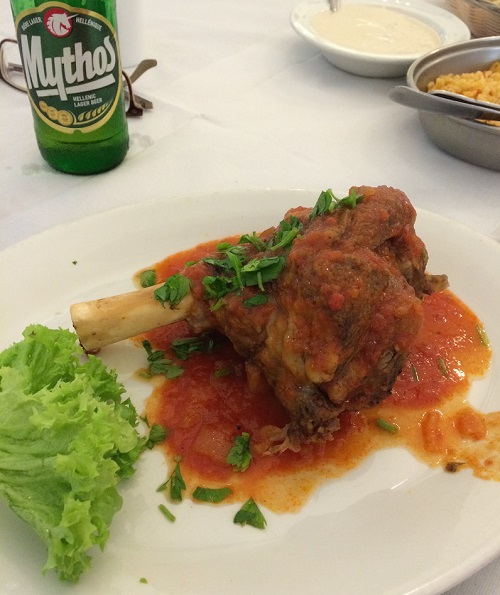 This here thing here is a dish called Klephtiko, which Squinter had last week in a Greek restaurant in Liverpool. Squinter’s had a few lamb shanks in his time (right, okay, have you all stopped sniggering now?) but this one took the biscuit, to employ what’s in the circumstances probably an ill-advised culinary metaphor.

You haven’t tried lamb if you haven’t tried this, although why Squinter was provided with a knife and fork isn’t entirely clear because the meat would have fallen off at the touch of a spoon.

It was a favourite dish of the Klephts, a band of anti-Ottoman insurgents who resisted Constantinople rule from their constantly shifting hideaways in the remote Greek mountains. The dish was also known as ‘stolen lamb’ as the Klephts would steal lamb and goats as they moved around, baking the meat in an underground earthen oven to prevent the smoke giving away their position to Ottoman forces.

Squinter rather likes the idea of rebel food, although he rather thinks that lamb shank slow-baked in garlic, tomatoes and lemon was seldom on the menu in safe houses in Andytown in the 70s and 80s. Stew, more likely, with HP sauce, plain bread and somebody keeping dick; an occupied six north-eastern counties fry, perhaps; or maybe if time was tight and the binlids were rattling a butter and sugar sandwich and a glass of milkman’s orange.