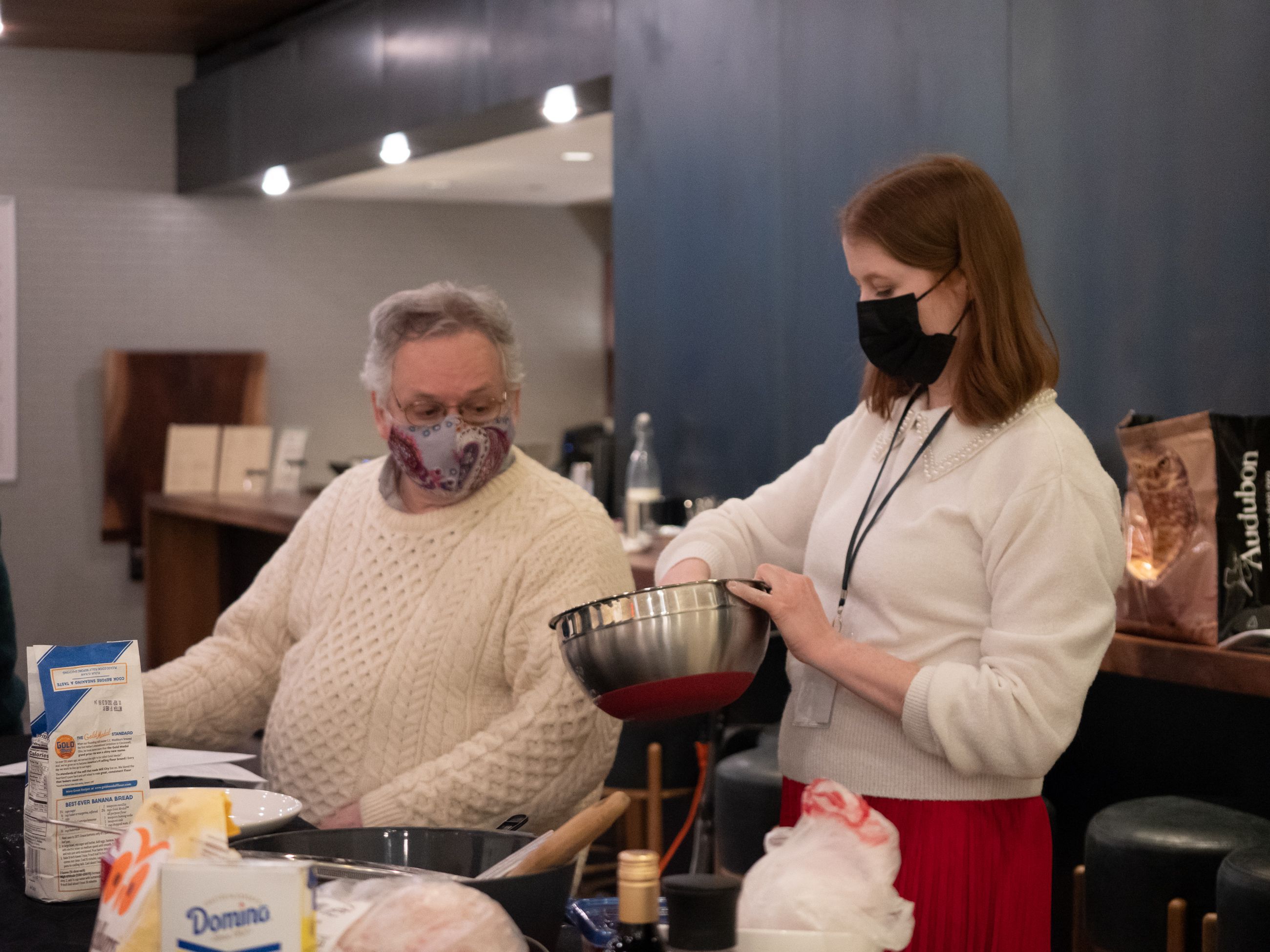 Feast or Famine was the theme of the New York Irish Arts Center’s Irish Language Festival and Lá na Gaeilge on April 3. In the Hell’s Kitchen area of Manhattan, once a 1970s hub of poor and working-class Irish Americans, Gaeilgeoirí of all backgrounds and abilities gathered for the center’s 2022 celebration of the Irish language.

The center, founded in 1972, moved into its newly built state-of-the-art facility late last year, and there was no finer place to extend a céad míle fáilte to those who had come from near and far to get a taste of the Irish language.

And they came. They brought the Irish weather with them too. As the heavens opened, a wave of excitement rose amongst the crowd indoors. A cúpla focal were spoken, and the scaifte mór quickly embraced what they’d missed. What they’d longed for. That hunger for the language. The spoken word. Comhrá with a stranger. Connection to a friend.

Briana Lynch, a New Jersey native now living in Brooklyn NY, was delighted to get to the festival and use the Irish she’d been learning throughout the pandemic. “It gave me more confidence getting out and connecting with people through the language again. After the pandemic, it’s been really nice to remember that I can still talk to people and in Irish too."

Bia: the complex role of food in Ireland’s history and culture was explored in the day’s various workshops and offerings: a fun cooking class as Gaeilge with Caoimhe Nic Giollarnáith; a fascinating exploration into an Górta Mór through Gaelic artforms of music and poetry with Joseph Jones; a Bord do Cheathrar class with restaurant and shopping vocabulary led by Paul Ferris; and a bilingual class on the potato’s indelible place in Irish culture with Ní Chiobháin.

When everyone had their appetites whetted by the workshops, they gathered in the café for tea and a chat, or a bit of caint agus craic. And if there was ceol to be heard it was the harmonious sound of people gathering again, laughing again, and connecting again: all through the Irish language.

Maggie Hubbard, originally from Mississippi and now living in Brooklyn, NY, started to learn the language at the Irish Arts Center during the pandemic and loves the Irish language community. “It’s kind of become my little community away from home. And now I’m sucked into the language.” She felt everything on offer during the festival really helped people like her, as a beginner, to get “more of a taste of the spirit behind the language, and not just the grammar.”

Erick Boustead, from Wisconsin, now living in Carmel, NY, traveled over one and a half hours to get to the center. He first learned Irish when he took a master’s degree in Irish Studies, History & Literature at NUI Galway; his interest prompted by his mother’s grandparents coming to America from Ireland. He then found himself returning to delve deeper into the language when his mother passed away. “Grief catalyzed my interest in the language," he said. "Shortly after my mom passed away it opened up this really intense interest in me because I had lost this familial connection,” he said. "The festival allows me to stay connected to the community of Irish speakers that I feel connects me to the history of the language."

He was especially keen to see writer and documentary-maker, Manchán Magan, and his performance of Arán & Im. In Galway his class friends had told Boustead about Magan, and when he first heard his podcast, he was “blown away.”

There were two performances of Magan’s Arán & Im. Indeed, many enjoyed it so much that they returned for a second helping.

Magan spoke of “the incantatory quality of the Irish language” as he lulled the audience into his world: a non-traditional piece of natural theatre capturing the history and beauty of the Irish language and its litany of lovely words, while baking his sourdough bread. As the smell wafted upwards towards a captivated crowd, only the oven bell interrupted their thoughts.

A ciotóg himself, Magan got the crowd to turn the old-fashioned handle of a churn and turn some cream into butter themselves while he continued his exploration of Irish words. If the audience was going to be fed bread and butter, the host would make them work for it.

Who knew that a word sounding so soothing and slender as cáithnín could mean so many things? Like “a smidgeen of flour" —  that unmeasured amount Magan slipped through his fingers onto the dough. Or “something small that gets into the eye and irritates it." Perhaps “a snowflake or even a sub-atomic particle."  Continued Magan: "Most evocatively, it also means goosebumps." The audience shifted in their seats as though an ancient veil that shifts between worlds had descended upon them.

The performance seemed over all too soon, but not quite, as the audience was invited to taste Magan’s bread and that butter they’d churned with their very own hands. Much munching and remarks of “blasta” and “iontach blasta” resounded throughout the contented theatre.

There was another serving of workshops, so participants had the chance to catch something of interest they’d missed first time round — and by now they were connecting and reconnecting with people they’d just met for the first time that day.

Maria Walker of Indiana, now living in Manhattan, came to the Irish language in a more roundabout manner than most.

“I have a linguistics background so I started learning Irish because of its grammatical structure which is really interesting," she explained. "But then I realized that as a linguist we often get wrapped up in the grammar of things and you don’t pay attention to the people who speak it. With Irish I found a wow factor — this is an amazing group of people who are trying to keep this language alive.”

She knew she would have nothing to fear coming to the center on her own because she was confident the Irish language community would make her feel at home. “I made friends the minute I opened my mouth and started speaking Irish. Everyone is so welcoming in the community.”

While conversations continued there was one other course on the menu: the award-winning Irish language film Arracht' set in a bleak and unforgiving Conamara landscape during An Gorta Mór.

Promises to meet again and to form new Irish language groups rolled out into the night as the audience made their way from the Irish Arts Center out into the New York night and the end of a successful Féile na Gaeilge.

The New York Irish Arts Center will have Irish language classes starting again both in-person and online for every level of learner.