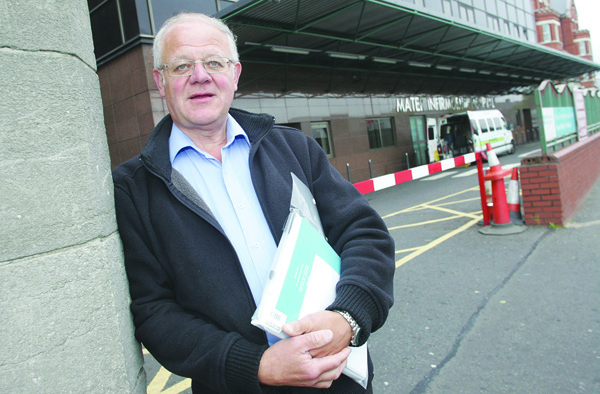 Community worker Brian Mullan who passed away this week

TRIBUTES have been paid to community worker Brian Mullan who passed away this week after losing his battle with cancer.

Father-of-six Brian was a well-known face from his work with the Mater Hospital Community Forum, Newington Housing Association, the Newtownabbey Policing and Community Safety Partnership as well as the Newtownabbey Street Pastors.

The retired civil servant had thrown himself selflessly into community endeavours over the last decade and won many friends and admirers.

UNISON representative Eoin Stewart, who sat with Brian on the Mater Hospital Community Forum, which campaigns to retain services at the Crumlin Road facility said, Brian is irreplaceable.

“The work Brian did fighting for the Mater was outstanding and he will be missed. Even when he was sick and in hospital he was constantly sending out emails and he also helped organise the recent fun day despite his illness. The truth is we won’t be able to replace him. His enthusiasm for the Mater was amazing.”

Alliance Councillor John Blair, who knew Brian through his membership of the Policing and Community Safety Partnership in Newtownabbey, said he was a real force for good.

“Brian's commitment to making a better and united society made it a pleasure to know him,” he said. “His dedication to the Health Service, social housing, providing a safer community and his faith touched many lives and will not be forgotten.”

A statement from Newtownabbey Street Pastors said Brian was instrumental to their formation.

“Brian Mullan did a fantastic amount of work in the background, so much so that we are not sure that we will ever match that effort or passion again.

“Brian helped get the ANSP on the streets. He had the spirit, conviction and passion to want to reach out to help people on the streets of Newtownabbey. When he learned of talk of the formation of the ANSP he offered his services straight away.

“At that point in his life Brian was unwell. And over the next three years, no matter how ill he was or the times he spent in hospital, he still worked on keeping us going with what we needed, be it funds or stopping off to purchase lollipops to hand out on the streets.”

Brian’s remains will leave his home at 95 Elmfield Road this morning (Friday, July 21) at 9.30am for Requiem Mass at 10am.

We here at the North Belfast News would like to pass on our sincerest condolences to the Mullan family.