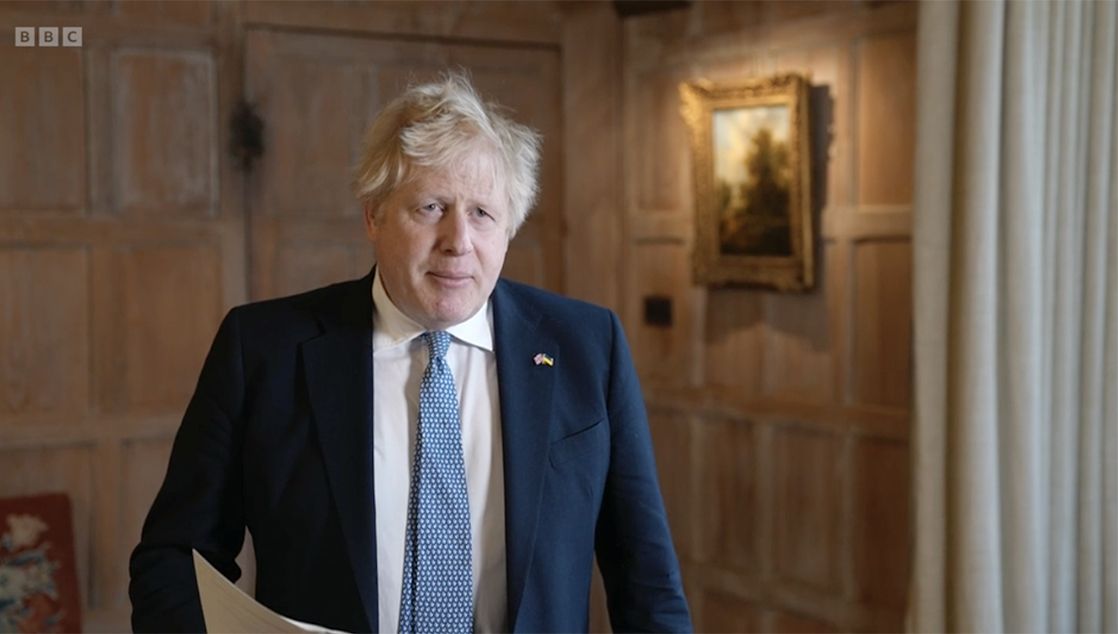 IN politics, one skill central to survival is the ability to distract. If someone’s coming at you with a knife, it’s a great advantage if you can persuade them there’s a bear right behind them, thirsting for their blood.

Which brings us to Boris Johnson’s meeting in the Ukraine with President Volodymyr Zelensky. Johnson used the occasion to tell the Ukrainian President how gung-ho the British Government were about helping Ukrainian refugees, and to assure him that British weapons of all sorts were on their way so Ukrainians could kill Russians more efficiently.

Let me not be too harsh. Johnson is no doubt moved by the pictures of distraught refugees fleeing for their lives. But while he could have called Zelensky on the phone and conveyed his support, the TV pictures of the pair were gold-dust for Johnson.

That’s because the British PM badly needed a distraction. His repeated lies to parliament and the British people about those No.10 parties were seriously damaging him. While the British people suffered the loss of loved ones with never a hand to hold,  hands in No.10, week after week, were shovelling drinks and party-food into No.10 faces. When the booze supply ran low, a designated staff member went out and bought a suitcaseful of refreshment. Downing Street partied while the general population followed the rules and suffered.

But, hey, look, forget about Partygate  – look at these pictures coming out of Ukraine. I, as your Prime Minister, feel sickened by them, which is why I’ve braved shot and shell to grip the hand of President Zelensky. Any of you who were getting red-faced and furious over my porky pies about Partygate, forget it. Can’t you see the tears of those poor, displaced Ukrainians? Don’t you know there’s a war going on?

Nearer home, but likewise linked to the Ukraine situation, you have the Taoiseach Micheál Martin and others  getting very concerned about the South of Ireland’s  neutrality policy. “I think we could look at a Citizens’ Assembly to discuss these issues,” he says. Leo Varadkar has been full-throated too: “In this [Ukrainian] conflict Ireland is not neutral at all... Our support for Ukraine is unwavering and unconditional.” Minister for Foreign Affairs Simon Coveney has announced that “Ireland (sic) is going to go through a very fundamental review and debate and discussion around security and defence policy.” And Fianna Fáil MEP Barry Andrews, like his party leader, has called for a Citizens’ Assembly on neutrality and a follow-up referendum.

The pattern is plain. Johnson points away from Partygate and cries, “Oh, look, those poor Ukrainians, we must support them.” Micheál, Leo, Simon and Barry point away from the South’s housing crisis, its unjust health system, its homelessness, and calls on Irish people to observe Ukrainian tears and rethink neutrality. Better still, let’s have a Citizens’ Assembly on neutrality.

A Citizens’ Assembly – wasn’t that what Sinn Féin and others were calling for to examine what a new Ireland might look like? It was indeed.

Both Johnson and the Dublin Government have historical evidence that a good distraction  – preferably a foreign war – works wonders. In 1982, Margaret Thatcher was floundering in the opinion polls. Then she got lucky – the Argentinians invaded the Malvinas/Falklands.

Trumpeting her concern that the Falklands must remain British, Thatcher sent the gunboats to the South Atlantic. Her brave boys retook the Falklands, Thatcher’s ratings soared.

The rest is history.