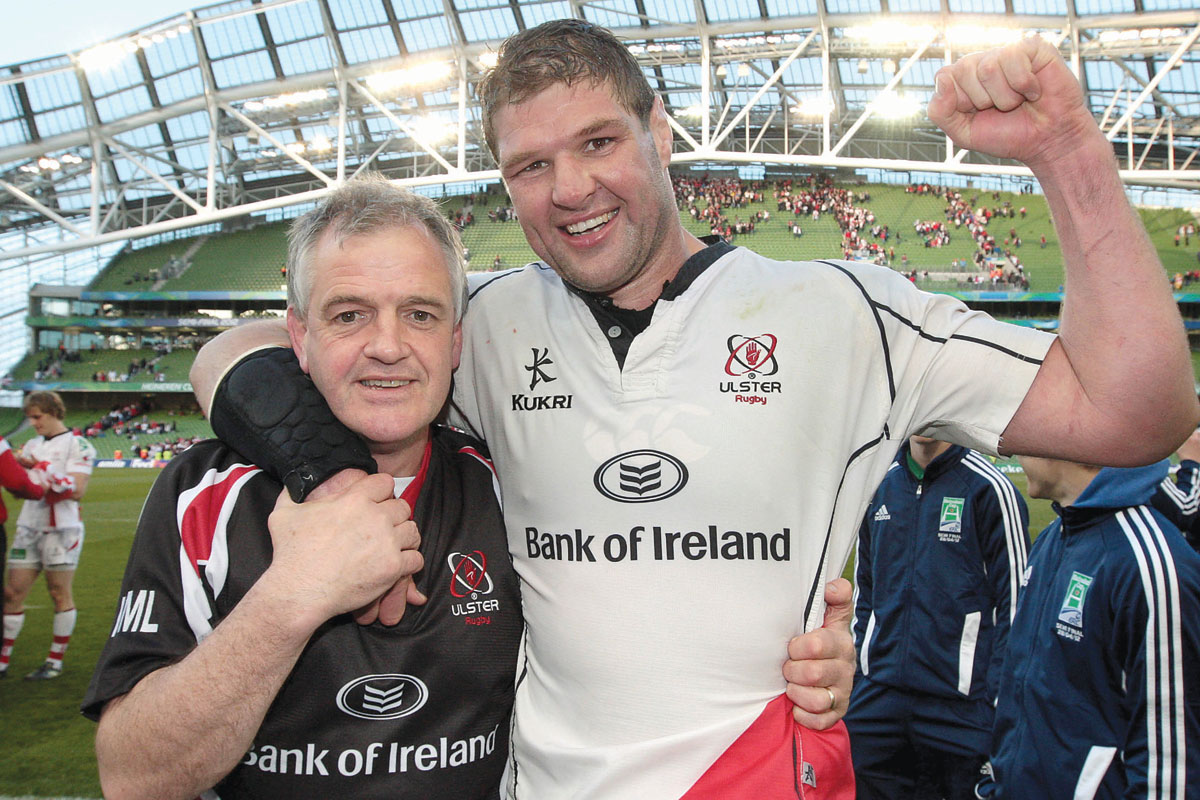 ULSTER fans will be hoping to party like it’s 1999 at Twickenham on Saturday when Brian McLaughlin’s side take on Leinster in the Heineken Cup final.

The all-Irish affair has grabbed the imagination of fans throughout the country and while Ulster are looking to secure their first European title since their only success in ’99, Leinster are vying to become the first Irish side to win back-to-back titles.

On top of this, victory for Joe Schmidt’s Blues will see them overtake Munster as Ireland’s premier club side and move into second place in the European roll of honour.

With Ulster going into the game as a massive underdog, team captain Johann Muller feels the pressure is all on Leinster but believes that Ulster are more than capable of causing the upset.

“There is probably a little bit more pressure on them than us as favourites,” admits the South African.

“We almost have nothing to lose. That’s what the public and media will think but from our point of view, we have one goal and that is to go to Twickenham to win. We aren’t going to make up the numbers or to play in the final. Yes, it’s a great achievement to be there but we will be disappointed if we end the season with no silverware.

“From I have been here we played them five times and have come close but not beaten them. Obviously they are massive favourites but it’s a nice position for us going in as underdogs.

“One thing I can guarantee is that this group of players and management fully believe we can beat them.”

Muller is no stranger to the big occasion having won a World Cup with the Springboks in 2007.

However, the Ulster lock admits Saturday will be a little bit special as he takes on a key role as skipper.

“I was thinking earlier in the week I have been involved in the Super 14 final, a Currie Cup final and a World Cup final but this is right up there,” added the 31-year-old.

“In the World Cup I was on the bench and only played sometimes but with this it has been a real team effort and I have played in all the games.

“Obviously being captain makes it even more special and I can’t wait for Saturday.”

For Ulster coach Brian McLaughlin, Saturday marks the end of his tenure, as he will be replaced by New Zealander Mark Anscombe next season.

If the former Inst school teacher is feeling emotional about his last game in charge, it didn’t show at Tuesday’s press conference as he claimed all that matters this week is preparing his team in what is an exciting week for everyone involved.

“To be honest it hasn’t really crossed my mind. The key thing this week is when we get to Twickenham, to do ourselves and fans proud and make sure everyone has a really super day,” he said.

“I will think about the rest of it next week and the week after.

“It has been an exciting week and we have said all year how exciting the European Cup is.

“We are heading for the final and training this week has been a step up, it has been outstanding.

“Johann and the rest of the players have really been performing out there so we just have to make sure we can carry that through onto the field on Saturday.”

Back row Chris Henry is likely to be available having been out with a shin injury but all of the talk this week has been centred on whether Brian O’Driscoll will be fit to start for Leinster.

The Ireland captain damaged his knee in training last week but McLaughlin expects him to start.

“I’m sure wild horses wouldn’t hold him back; he will be there all right,” chuckled the Ulster coach.

“These are the occasions as a coach you want all your players fit and available for; you don’t want anybody injured.

“These are the days everybody dreams of playing in and you wouldn’t want anyone to miss an occasion like this so hopefully Brian will be raring to go on the day and I’m sure he will be.”

Just as his captain said, McLaughlin acknowledges his side will be outsiders on Saturday but is convinced they are capable of winning.

While it will take a mammoth effort, he said they have the ability to top the performance against Munster in the quarter-final and hopes they give their loyal support something to cheer about by around 7pm on Saturday.

“We are going to have to be at the level we were against Munster or maybe even better but I have no doubt the players are capable of performing to that level again and going one step further.

“The role of the fans this year for us has been fantastic. Certainly over the last three years as far as I’m concerned, the Ravenhill crowd have been brilliant.

“I’m just hoping they can all get across but certainly the travel companies seem to be making a bit of a killing.

“Now we just want to get to London and show we are capable of doing what no Ulster side has done since 1999.”