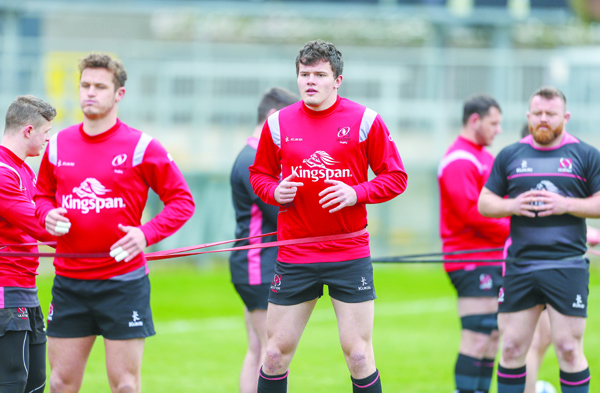 HAVING reached the quarter-finals of last year’s Champions Cup, Ulster will be hoping to again make it to the knockout stages and they begin their campaign with a tricky trip to Bath tomorrow.

Dan McFarland’s side have enjoyed a decent start to the domestic campaign with four wins from six and took a losing bonus point away to Munster last week, but the challenges get tougher in the coming weeks with tomorrow’s European opener followed by a home game against Clermont Auvergne next week.

Another English side, Harlequins, are still to come next month so the onus is on Ulster to give themselves a platform to build on.

Bath come into this game off the back of a morale-boosting home win against the previously unbeaten Northampton Saints in the Guinness Premiership to move them into ninth place despite having Aled Brew sent off.

Their scrum was as solid as ever and with England internationals Sam Underhill and Taulupe ‘Toby’ Faletau expected to return this week.

British and Irish Lions’ Jamie Roberts, Anthony Watson and Jonathan Joseph form part of a formidable attacking unit and Ulster coach McFarland is fully aware his side face a tough task this weekend.

“We’ve got a really tough start away to Bath, but what a place to go,” he said.

“They’re very proud about where they play and the fans they play in front of. That’s part of the legacy of the club, but they also have put together a really strong team.

“They are really strong up front, physical in their forwards as English teams traditionally would be, but they’ve electric backs as well. They’re extremely dangerous out there and have threats all over the field.”

The good news for Ulster is that Louis Ludik and Will Addison have recovered from recent injuries and are available for selection this week, with captain Iain Henderson also expected to make his return to club colours following the Rugby World Cup.

His international team-mates Jordi Murphy and Jacob Stockdale made their first starts of the season in last weekend’s 22-16 defeat away to Munster in the PRO14.

While it was marked improvement from last year’s thrashing at Thomond Park, there was maybe the sense of one that got away from Ulster, but Stockdale believes it leaves them in a good place going into Saturday’s European opener.

“It was pretty difficult starting back and going straight into an inter-pro,” he said of his first game of the season following his exploits in Japan.

“It was a tough game, but I wouldn’t have it any other way. It was a bit of a weird game and a difficult one to get into, especially for a winger, but for large parts of the game we did really well and it’s just about doing that for 100 per cent of the time instead of 90 per cent of the time.

“It’s frustrating looking at a game we had in control for 67 or 70 minutes and one try… we let it slip. It’s frustrating, but at the same time bodes well for moving into Europe.”

Ulster’s last outing in Europe came at the Aviva Stadium last year when they were narrowly defeated by Leinster at the quarter-final stage.

Ulster have added some real since then with Jack McGrath making the move north and his arrival has tempered the retirement of former captain Rory Best.

Whilst not ideal, the injury situation is not as bad as it could be and while they did taste defeat last weekend, there is a positive mood in the camp going to England this weekend.

“Coming back, the guys are in really high spirits and there’s a buzz about the club,” Stockdale reports.

“The new guys who have come in have integrated really well so I think we are in a good place and it’s now about getting excited about the big games coming up.

“The buzz of Champions Cup never really leaves you. It’s exciting to get to challenge yourself at a different level than you normally would in the league and I think the enjoyment of playing in those games and big stages carries you through no matter what level you’re at.”

It will of course be a tough task tomorrow afternoon, but one Ulster feel they are capable of rising to as they attempt to get a tough European pool off to a good start.

Stockdale is well aware of the task that lies ahead, but he has faith that Ulster can return from the Recreation Ground with something to build on against next week’s European home opener against Clermont Auvergne.

“Bath pose a really serious threat and they have a lot of internationals coming back,” he acknowledged.

“They are a really good side, especially at home. We have to keep stepping up our performances, especially as the games keep getting harder, but I think it’s something we’re well capable of.”