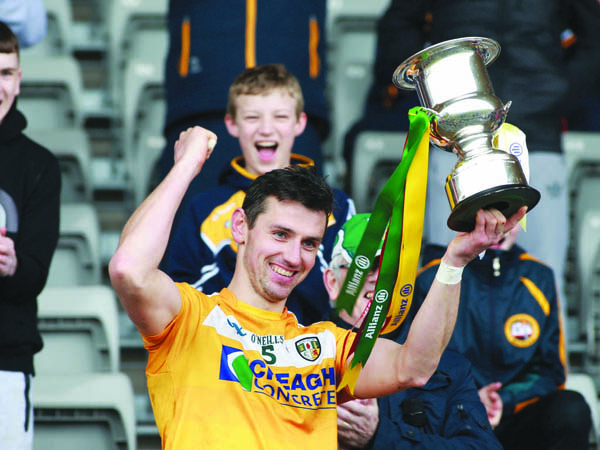 Antrim’s senior hurling captain from last season, Simon McCrory, is one of a number of experienced players unavailable for 2018. The Saffrons get their Division 1B campaign underway with Sunday’s clash with defending league and All-Ireland champions Galway in Pearse Stadium ©INPHO/Presseye/John McIlwaine

Originally billed as a double header with the Division One football tie between the Tribesmen and Ulster champions Tyrone, the football has been moved to Tuam due to doubts over whether the pitch at Salthill could cope with two games. Dividing the Galway support may help create a less intimidating atmosphere for the visiting team, but the task remains a daunting one.

It has been 10 years since Antrim have played the reigning All-Ireland champions in a league fixture.

Back in 2008, Antrim travelled to Nowlan Park having claimed a famous win over Kilkenny in the pre-season Walsh Cup. However, Brian Cody’s men were in typically ruthless form and claimed a 3-22 to 1-8 over the Saffrons.

A decade on, managers Terence ‘Sambo’ McNaughton and Dominic ‘Woody’ McKinley, along with Gary O’Kane and Neal Peden, attempt to cause a major upset against the All-Ireland champions. That Galway are also the defending league champions only adds to enormity of Antrim’s task, but McKinley insists his players should relish the challenge of pitting themselves against the best side in the country.

“It has been a long time coming for us all,” said McKinley.

“It has been a serious number of years since we have had an opportunity like this. We have been away fighting in different corners of the country in the lower leagues. Last year, one of the targets we set was to get into Division One and now we are there. It is a bit of a surprise that the All-Ireland champions are in Division 1B, but we are looking forward to it.

“Things are going well at training and most of the players have come back to us this year in better shape. The attitude is changing slowly – boys turning up on a regular basis and making sure they are looking after themselves. I think we are still struggling a bit for numbers and we would love to have a bigger panel, but the base isn’t broad enough.”

He added: “They have earned the right to face Dublin, Limerick and Galway. That’s not saying we are way ahead of ourselves. We know where we are at and it is going to be a massive challenge for us. You either relish it or say that’s not for me. There are boys who are just mad to get at it.

“We will be doing our best to maintain our status in the division. It is going to be very hard. The draw hasn’t been kind it us and we have three away games.”

The sight of Joe Canning finally getting his hands on the Liam MacCarthy Cup was one of the most enduring images of last summer.

Galway lost out to Kilkenny in the 2012 decider after a replay and also lost the 2015 final to the Cats while 2016’s one-point loss to eventual winners Tipperary in the semi-final only added to their heartbreak. Having fulfilled their undoubted potential last year, McKinley feels the Tribesmen will be in no mood to surrender their position at the top of the table any time soon.

“The potential in Galway has always been there,” said McKinley.

“The big question for them now is can they do back-to-back and build a dynasty there. Playing Waterford in the final, the country was split in half because a lot of people wanted Waterford to win as well.

“The structures they have in place in Galway are remarkable. You can see it in the fitness and the physique of their players. It is awesome.

You are talking about a county that has won six or seven minor All-Ireland titles over the last 12 years and a few U21 titles as well. They have great resources and that has to come to the top. They got to the holy grail and they will want to prove they are the best team once again – I just hope we don’t get the brunt of that this weekend!”

Antrim’s hopes of retaining their status in Division 1B hasn’t been helped by the withdrawal of several high-profile players.

Last year, Dunloy’s Paul Shiels surprisingly retired from inter-county hurling while Antrim’s 2017 captain Simon McCrory has opted out of the panel for the foreseeable future. McCrory’s St John’s clubmate, Ciaran Johnston has also stepped away from the county panel to fully recover from a long-standing hip injury while Sarsfield’s duo Niall McKenna and Daniel McKernan are also unavailable. McKenna is expected to feature for Warwickshire this season after moving to England for work while McKernan is in his final year at university.

Ciaran Clarke is also unlikely to play against Galway after going over on his ankle in the opening stages of the McGurk Cup final win over Down earlier this month while Cushendall’s Eoghan Campbell remains sidelined with a foot injury.

All seven of the aforementioned players featured in the Christy Ring Cup final defeat to Carlow in Croke Park last year with McKenna and McKernan being introduced for the second half. While McKinley lamented the loss of so many experienced players, he hopes that McCrory will return before the start of the Joe McDonagh Cup in May.

“Simon has opted out, but hopefully it will just be short-term,” said McKinley.

“He works as a hurling development officer and is he getting married and he is moving house. He is caught up in the middle of that at the minute. Maybe in five or six weeks time he can come back in – the door will be left open for him. He is one of the players we would love to have in there.

“Niall (McKenna) is working in England and I think he is going to be playing for Warwickshire and Dan McKernan is in his last year at university. They are big losses too. You have go with what you have and we are very happy with the effort that they have put in.

“Ciaran Clarke went over on his ankle against Down and he is a massive doubt for this weekend. Eoghan Campbell had a broken bone in his foot and he has only started back running. He won’t make this weekend.

“On the plus side, Nigel Elliott has come in and has transferred his club hurling to the county and is doing well. Joe Maskey is an example to all young players – he has done a year and a half of conditioning and working away. He has come on leaps and bounds.

“Conor Johnston has moved to midfield and I think it has supplemented his game big time. It takes away our goal threat a little, but we think it serves the team better and he has a great wrists on him. James Connolly of Rossa is back with us too. Again, he is a guy with lots of potential. You just want him to stick with it and work with us.”