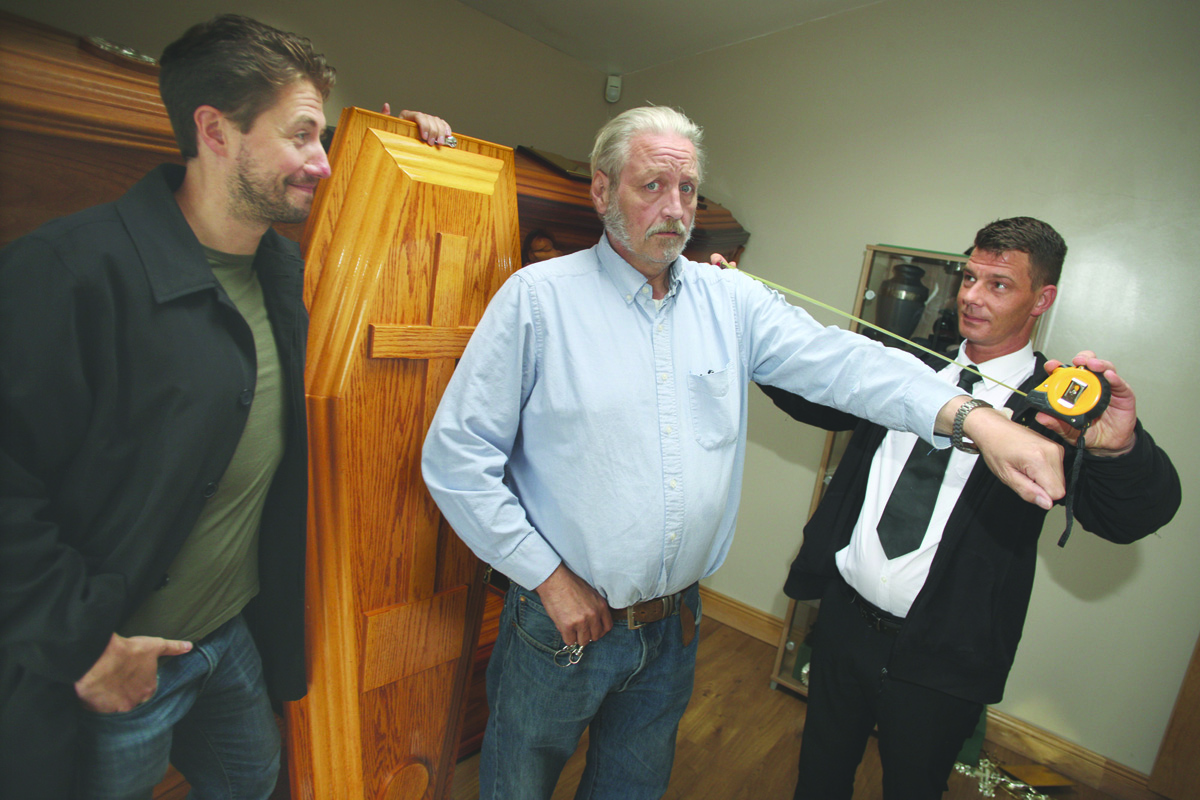 BOX OFFICE: Shaun Blaney (Basil Gray) and BJ Hogg (Gerry McSorley) get kitted out for the return of Three’s A Shroud with the help of Liam Fegan from PJ Brown Funeral Directors on the Falls Road

FOR generations, Catholic undertakers in Belfast have buried Catholics and Protestant undertakers have buried Protestants.
Three’s A Shroud, written by Stephen Large and directed by the hugely-talented Martin Lynch of GBL Productions, changes traditions once and for all.
The comedy play is back and is set to be better than ever before with more laughs, more characters and more chaotic scenes.
The storyline centres around veteran undertaker, Gerry McSorley who finds his Catholic customers being stolen by a young Protestant rival, Basil Gray.
McSorley’s funeral directors is run by veteran Gerry McSorley and played by the wonderful BJ Hogg, famous for his star role as Big Mervyn in Give My Head Peace.
McSorley finds his Catholic customers being stolen by a younger, more attractive and Protestant rival, Basil Gray (Shaun Blaney).
Things go from bad to worse when young Polish woman, Irena Bukowski’s (Nuala McGowan) cut-price, new-age, interdenominational funeral home usurps them both.
This week, both BJ Hogg and Shaun popped into PJ Brown’s Funeral Directors on the Falls Road, as they get ready for their latest tour across the country.
The local business have kindly agreed once again to help the cast and production team out with some technical advice, funeral tips and providing coffins, of course.
Looking ahead to this year’s show, BJ Hogg said: “It’s great to be back with the show and it is set to be bigger and better than before.
“Basically, it is two funeral firms, Gray’s (Protestant) and McSorley’s (Catholic). They bury theirs and we bury ours.
“Gray decides he wants a bit more of the business and advertises to bury Catholics as well. Into the mix comes Irena Bukowski, a young Polish woman who undercuts the both of them for half the price.
“My role as Gerry McSorley is similar to me in many ways – a grumpy old man. He hates the internet and is in the last century and likes it that way.”
Shaun, who plays Basil Gray is looking forward to getting into his role once again.
“The truth is Basil doesn’t want to be an undertaker, but his father has passed away so he takes over the family business for financial gain and to get with the widows.
“Basil is a gangster movie fan and there is some fairly crazy scenes with dead bodies.
“We knew the play worked and it was just a matter of adding a few bits and pieces here and there.
“The audience was fantastic last year. They just get all the themes so well.
“As well as creating a funny and entertaining night out, Stephen wanted to stick two fingers up towards death and celebrate life.
“The show is based on the morbid theme of death but ironically it becomes about all the different undertakers trying to stay alive.”
Three’s A Shroud returns to the Waterfront Hall from September 20-October 6. Tickets are available by calling 028 9033 4455, online at www.waterfront.co.uk and at the Box Office at the Ulster Hall.