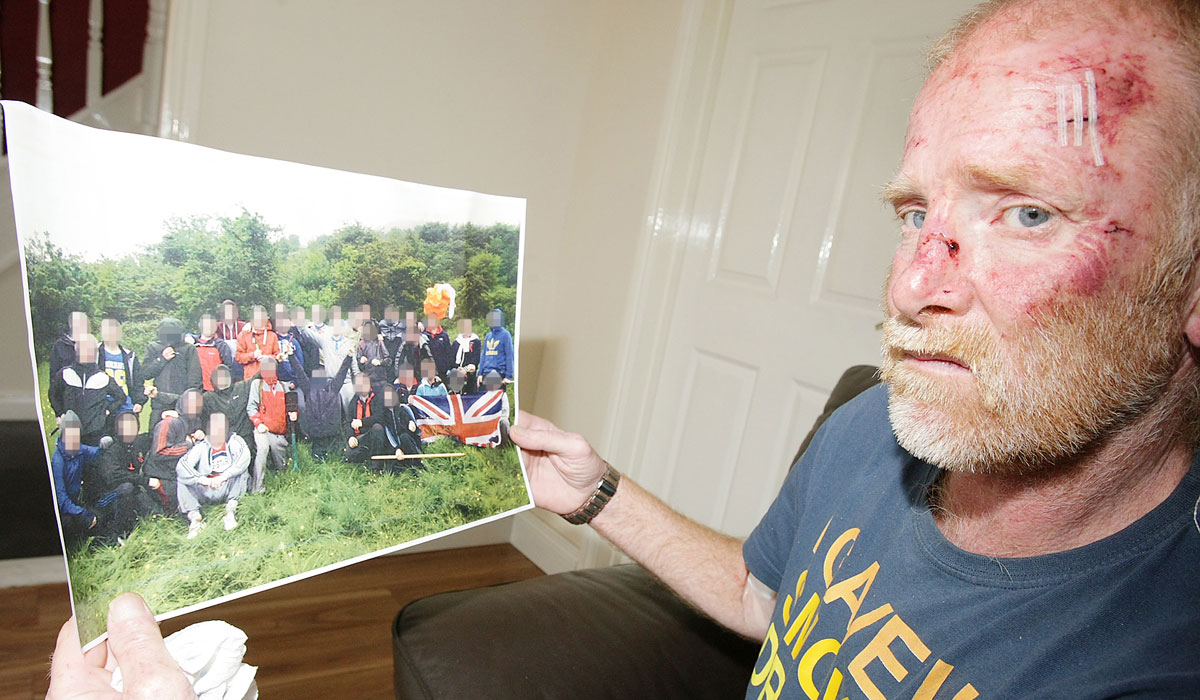 OVER 100 days after a local man was hospitalised after suffering a savage beating at the hands of a loyalist mob on Black Mountain, not one arrest has been made in the investigation.

And this week a loyalist source contacted us to say that the veteran UDA men who led the mob up the mountain are still free because they are working for the police.

“It might be news in nationalist West Belfast, but it’s nothing new here that these people have been touts for as long as they’ve been loyalists,” claimed our source, who said he was speaking out because he was fed up with the intimidation and racketeering being carried out by the UDA in loyalist West Belfast. “There is no-one here who takes them seriously except for young people like those kids in the picture who think they’re impressing people by hanging out with hard men. These UDA goons might inspire fear, but they certainly don’t inspire respect.”

The claims have reignited concerns about criminals in the pay of the PSNI. Over the past few weeks, we’ve been reporting on a notorious career criminal from Derryveagh in Lenadoon who attracted a rapid response police unit to his home recently after an attack was launched on his car. The thug, who has been shunned by the community and by his own family, is thought to have been given a panic button by his PSNI handlers.

Within the past week, Sinn Féin have brought the case of the Black Mountain police inaction to the highest echelons of the PSNI. Pat Sheehan MLA expressed his concerns to Deputy Chief Constable Judith Gillespie and Assistant Chief Constable Will Kerr.

On June 26, James McCoubrey was taking part in a peaceful demonstration on the mountain against the English queen’s visit when he was attacked by up to 30 loyalists carrying spades, hatchets and sticks. The 54-year-old Springhill man was hospitalised following the vicious and relentless assault, having suffered a broken nose, three fractured ribs and cuts and bruising all over his body.

The crowd responsible for the brutal attack immediately posted victory photographs on Facebook and have also boasted online about the attack on the defenceless father-of-four. A number of readers called the Andersonstown News to identify those featured in the picture and offer more information on the individuals.

Despite the stacking evidence, the PSNI told the Andersonstown News this week that, 107 days on, no arrests have been made.

Pat Sheehan said: “I raised this case with the Deputy Chief Constable Judith Gillespie and Assistant Chief Constable Will Kerr. I explained we are totally dissatisfied with the situation to date and I hope to hear back from them soon. There is a Policing Board meeting on Thursday and this may well come up for discussion once more.

“As I have said before, we had a situation where a man was very lucky to escape with his life. There is no doubt a vicious assault took place and there is no doubt about where and when it took place. A group of people posted a photograph on Facebook claiming they were responsible for the attack and in that photograph they were carrying at least one of the weapons James said were used against him. The police have also told us that some people in the photo are known loyalists. If dissident republicans carried out a vicious assault like this and posted a photograph of themselves with the offending weapons used in the attack, the PSNI would be out immediately looking for the people in the photo,” added Mr Sheehan.