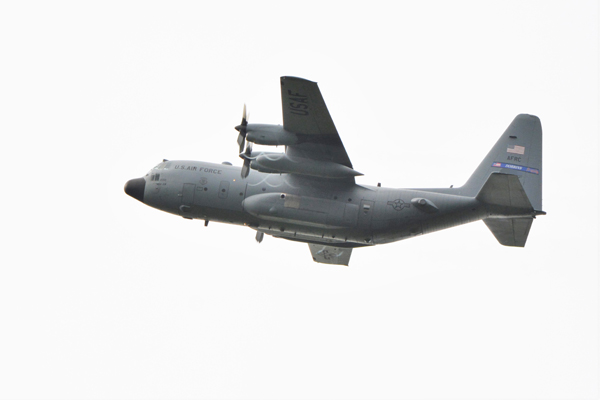 BELFAST International Airport is being used as a landing point for US military flights.

Sinn Féin MLA for South Antrim, Declan Kearney, has said questions must be answered by the airport as to the purpose of the flights which people living under the flight path have reported to the Andersonstown News.

The paper reported back in April how sightings of US Air Force military transport planes had been seen taking off and landing regularly at Aldergrove.

Speaking this week one resident said: “I’m concerned because of the wars that are taking place around the Middle-East.

“Are we now part of the supply chain in troops and munitions? Also are any of the munitions going to Tel Aviv, which will then be dropped on Gaza?

“Finally how many are rendition flights and who at Stormont signed off on USAF using Aldergrove?”

“A number of local people living in the vicinity of the airport have raised concerns with my office regarding the on-going US military flights entering at and leaving Belfast International Airport,” said Mr Kearney. “Given the on-going humanitarian crises in Syria and throughout the Middle-East and the role of the US Air Force as a protagonist in these conflicts, it is essential that local airspace is not being misused to facilitate and exacerbate these terrible events.

“In recent years another Irish airport at Shannon has been used for illegal rendition flights from the Middle-East to Guantanamo Bay.

“It is imperative that local airspace and the International Airport itself are not now used for similar reasons. I will be contacting airport management to seek answers.”

He added: “Sinn Féin will oppose all attempts to use the north, or anywhere else on this island as a stepping stone for the furtherance of conflict and war.”

West Belfast-born peace activist Niall Farrell who has campaigned against the use of Shannon Airport by the US Air Force said what is needed “is a peace movement north and south to keep an eye on this”.

“It doesn’t surprise me really that this is happening as there are US warplanes flying into Prestwick in Scotland and different other airports in Britain,” he said.

“I think it is great people are observing what is taking place. What we really need is for people to keep a look-out for exactly what type of planes are travelling through Aldergrove. Links should be made with the peace monitors at Shannon airport, Shannonwatch.

“Remaining vigilant you get to see what the warmongers are up to. Shannon, for example, is now basically a US military base which over the past 15 years has seen millions of armed soldiers, weaponry and even kidnapped prisoners being transported through this supposedly neutral part of our country.” he said.

A spokesperson for Belfast International Airport said: “We can confirm that we receive military flight, however, due to security considerations we are unable to give any further information.”