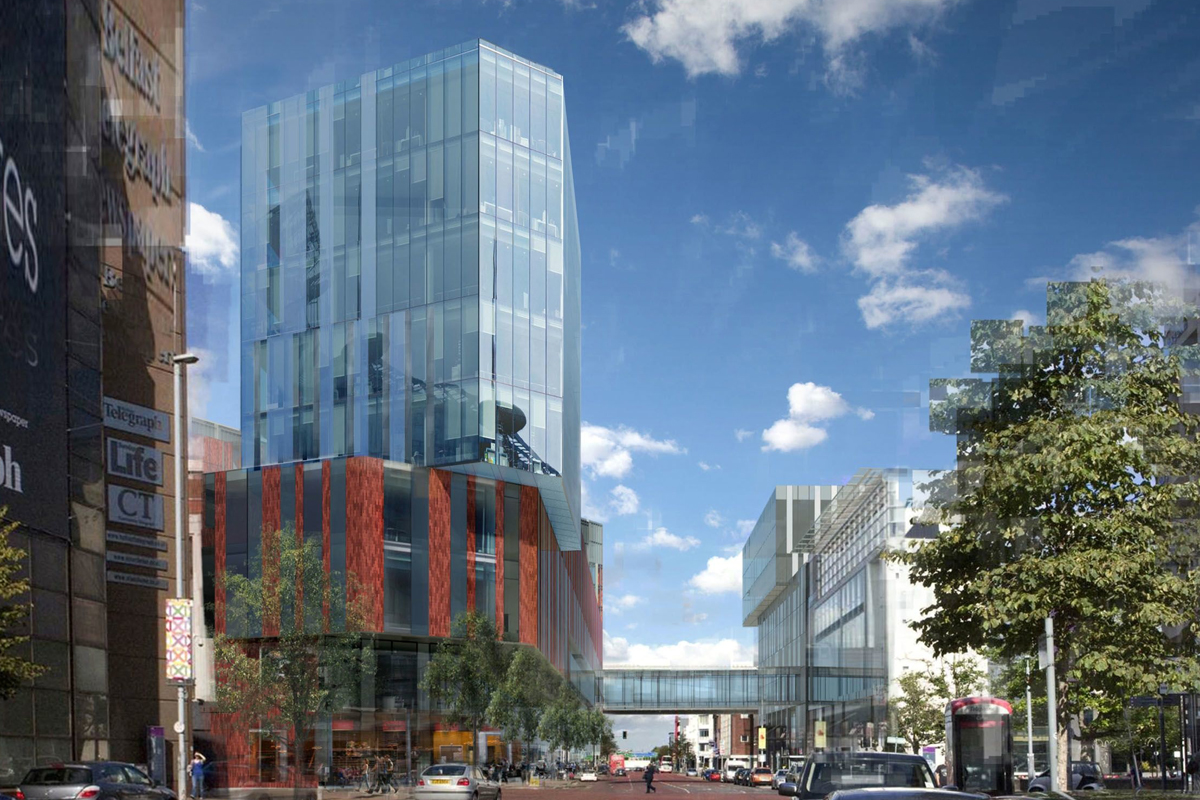 The Vice Chancellor of the University of Ulster has vowed the new Belfast campus will be “a good neighbour” to the local community as he unveiled new drawings of the £250 million development.

Professor Richard Barnett unveiled stunning architect’s images of the planned new campus last Thursday. The development will be approximately 75,000 square metres in size – equivalent to the size of Victoria Square – situated at York Street and Frederick Street, stretching up to North Queen Street.

The plans will see the Jordanstown campus move to the north side of Belfast city centre and will house 15,000 full- and part-time students and staff.

Professor Barnett promised the university will not be an ivory tower but will bring benefits to the people of inner city Belfast and beyond.

“We are proposing a world class campus in the heart of the city which will not only provide a dynamic learning and research environment for our students and staff but will also interact with the wider public,” he said.

“Universities which were built in the city have in the past tended to be inward-facing institutions behind iron railings and walls which did not interact with the communities around them.

“We are breaking from that tradition with a bold design that sends out a very strong message locally and internationally that we want everyone to feel that this is their university, regardless of their background, and we want them to have access to the building and facilities inside.

“It is very important to us that this design is not simply facing the city centre. It will be accessible from a number of points, inviting those communities which border the development to the North of the city and other parts of Belfast to come inside. We hope it will become their gateway to the city centre.”

“At the same time, the design points to a new vision of how the city might develop as an attractive and vibrant centre for innovation and learning in the future,” he added.

“From an educational point of view, our Belfast city campus will draw on best international practice, providing facilities which not only meet 21st century teaching and learning needs but which encourage new thinking and creativity among students and staff.”

The UU hopes that moving to the city centre will attract potential students who might previously not have considered studying at university.

"The university believes education is critical to the economy of the city and the region as a whole. By coming into the city centre, we want to bring education closer to the business community, providing a resource on their doorstep where we can explore and develop innovative ideas and exploit global connections,” said the Vice-Chancellor.

“However, as a leading widening access institution, we are also keen that this campus will open up educational and career pathways to those people from communities which have tended to shy away from university.”

Plans for the new campus will be formally submitted to the Planning Service later this month. Prof Barnett said he’s  keen to work with the local community and politicians to make sure any concerns locals might have with the campus are addressed.

“The university knows there will be challenges in the times ahead in ensuring Belfast and Northern Ireland have the right infrastructure in place for a development of this scale,” he said.

“We are working in partnership with Belfast City Council and a number of government departments, including the Department for Social Development, to ensure that concerns around student housing, car parking and public transport, public realm and community benefits are addressed.”

He added that he’s keen to reassure locals that the university will work with them and will take any concerns they might have about the new campus on board.

“We have also embarked on a process of engagement with the local community which has already proven fruitful in identifying issues which the university will address. That engagement will continue beyond the construction of this campus because the university wants to be a good neighbour.

“It will be an open, honest and realistic dialogue where the university will address those issues that are in its gift, but also work with community leaders and political representatives in central and local government to see how wider issues which are not our responsibility can be addressed.”