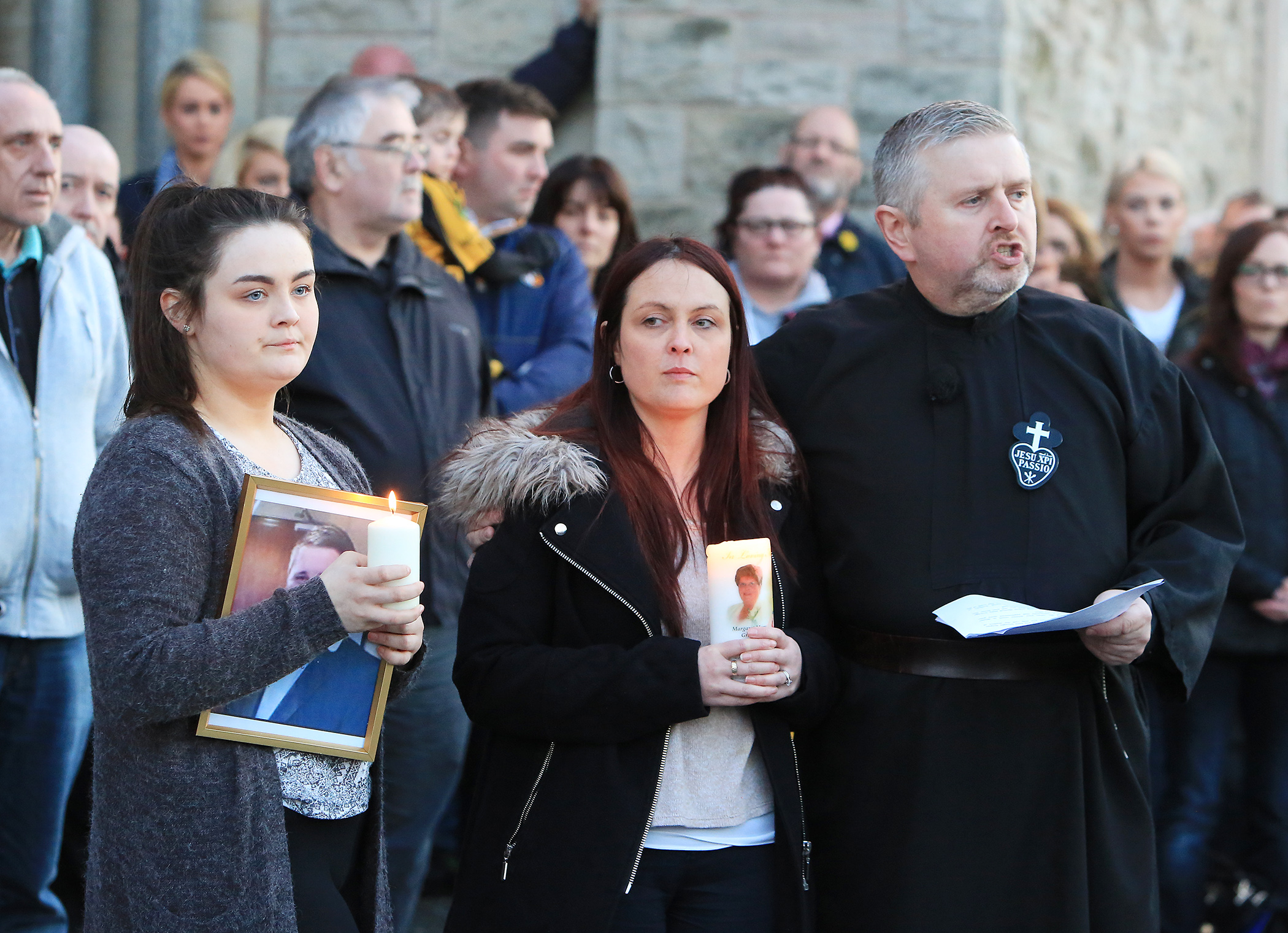 Michael McGibbon's wife Joanne McGibbon and daughter Seana with Fr Gary Donegan at the vigil in the grounds of Holy Cross Church, Ardoyne

Hundreds of people turned out in Ardoyne at a vigil for murdered father of four Michael McGibbon.

Mr McGibbon’s family were joined by friends and neighbours in the grounds of Holy Cross Church last night.

The vigil was organised by Holy Cross Rector Fr Gary Donegan who commended Mr McGibbon’s widow for her “courage, compassion and mercy”.

The 33-year-old was shot three times in an alleyway at Butler Place in a botched paramilitary-style shooting.

Police said Mr McGibbon was not known to them and they did not know why he had been murdered.

It is understood the taxi driver had been instructed to attend a meeting in the alleyway just 24 hours before his death and was told that he would be “safe”.

A group calling themselves ‘the IRA’ have since claimed responsibility for the killing.

A 34-year-old prominent local republican arrested by police shortly after the murder has since been released unconditionally.

Speaking at last night’s vigil, Mr McGibbon’s widow, Joanne, a nurse who battled to save her husband’s life after the shooting, thanked the local community for their support and said her faith would not be broken.

"The strength of this community will overtake anything that anyone who wants to destroy it has to do,” she said.

"If we all stay strong, we can stop these people. They can't beat us and it's not fair that families should have to go through this. They are not judge and jury."

He added: “We're a proud community here. A community that has suffered and endured loss like no other in the history of this country.

"We have the home of Michael in the shadow of this church, but it was people who came from the shadows who chose to take his young life.

"We will not let those who live in the shadows empty us of our courage.

"This young widow showed more courage, compassion and mercy than you'll ever know."

Loyalists holding a nightly protest at Twaddell cancelled as a mark of respect.

Speaking to the North Belfast News at last night’s vigil, Gerry Kelly said: “I would like to praise the bold initiative of Fr Gary Donegan and the clergy of Holy Cross and the courage of those that came out to support the vigil for Michael McGibbon.

“This is the real Ardoyne community coming out en masse to show solidarity for a grieving family and to reject those involved in this brutal murder.

“The only people that this group are at war with is the nationalist community.”