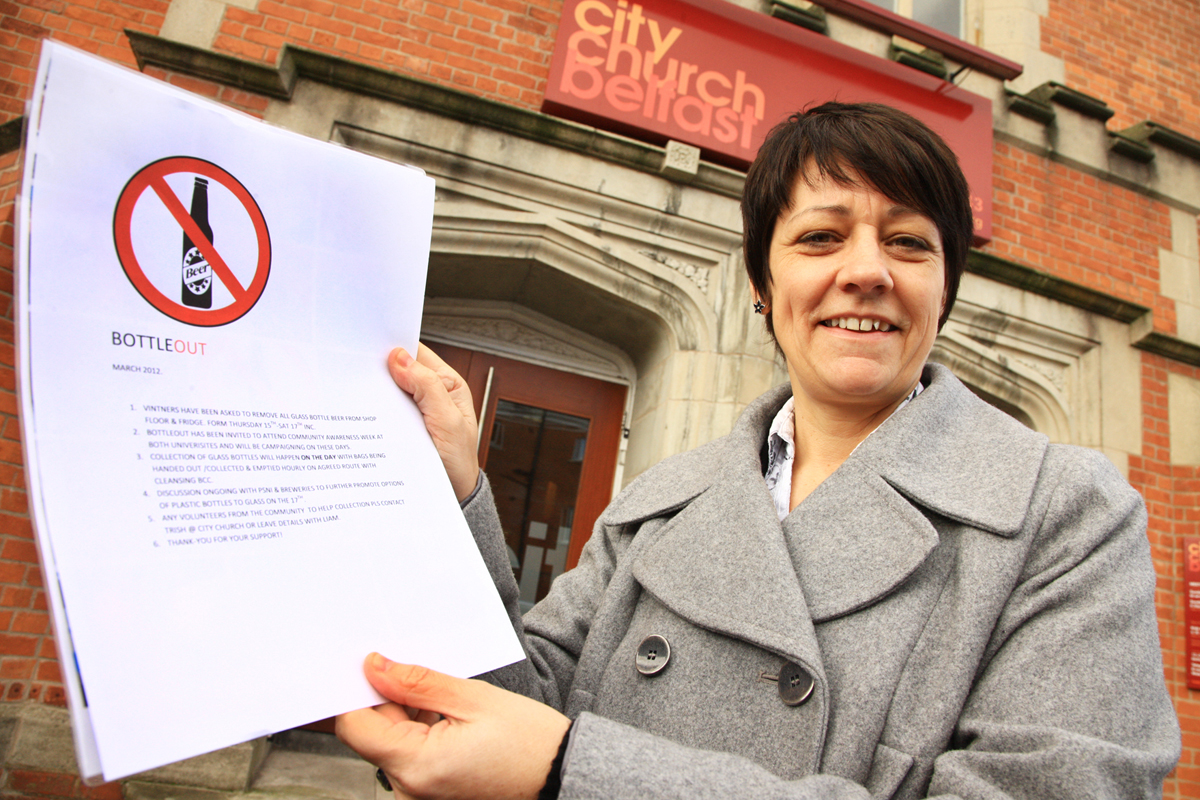 PREPARATIONS are underway for St Patrick’s Day in the Holyland, with a campaign to reduce the number of glass bottles used over the holiday.

The work carried out by volunteers from the City Church is now considered crucial by agencies including Belfast City Council and the PSNI, as they strive to make the maze of streets safer on what is the area’s busiest day of the year, and the most dreaded for long-term and long-suffering residents.

Trish Morgan heads up the City Church volunteer team, and for 2012 the big issue is once again glass bottles, after a record number were taken off the streets last year, amounting to an astonishing 80 full wheelie bins, and three large ‘Euro bins’ full of bottles discarded by bingers in the area over March 17.

In a bid to slash the quantity this year, the team will be touring the Holyland early on St Patrick’s Day, handing out recycling sacks to households before hourly recycling pick-ups by council lorries get under way until early evening.

Also being encouraged to do their bit in making the stressful day safer are local off-licences, who have been asked to remove glass bottles from their shop floors and promote the sale of alcohol in plastic bottles as an alternative.

Speaking with the South Belfast News, Trish described the work required to make a day dreaded by some, and highly anticipated by others, more bearable for everyone in this corner of South Belfast.

“In the last number of years, the quantity of glass on those streets is simply overwhelming,” she explained.

“Last year, for instance, when we filled the wheelie euro bins, there was still a huge amount more on the street that we didn’t have room for. This is why what we are calling the ‘Bottle Out’ campaign is again at the forefront of this year’s operation.”

Trish has helped produce a YouTube video encouraging students and others celebrating St Pat’s to heed the dangers caused by glass and dispose of any they use responsibly. A Facebook page has also been set up to spread the word while Queen’s University and the University of Ulster have been asked to promote the campaign on campus.

“A study in Wales by Cardiff University uncovered that glass bottle injuries there cost £71 million each year, and we are seeking to get statistics for Northern Ireland so we can see what the local damage is,” Trish continued.

“When you see the clips on the news of the rowdy St Patrick’s Day of a few years ago, one thing that is really frightening is the number of glass bottles being flung and whizzing by people’s heads. They are potentially lethal weapons after all.”

As tough as trouping around the Holyland on St Patrick’s Day is, Trish said the attitude of some students is encouraging, with many keen to act responsibly although others fail to take heed of the health and safety message.

“We will literally be going door-to-door to hand out the recycling sacks and we are expecting a number of attitudes. The main problems we have with those celebrating are from people who don’t actually reside in the area and come into the Holyland just for the day. They don’t live there and so feel even less obliged to act responsibly. It can make the job a lot harder but we have to consider the safety of everyone in the area, no matter how difficult it can be.”

Belfast City Council, who along with recycling services provide Community Safety Wardens and noise level teams in the Holyland throughout the night, said they would once again be working closely with City Church volunteers, and were supportive of the ‘Bottle Out’ campaign.