We want justice for our innocent dad 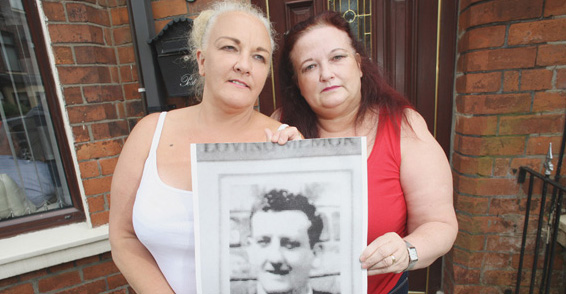 The family of a man shot dead by British soldiers and shown by declassified Ministry of Defence (MoD) documents to be innocent have appealed for witnesses to the killing to come forward as they pursue their fight for justice.

Christopher Quinn – known as Christy – was one of a number of Carrick Hill men who were on the streets as part of vigilante patrols engaged in community protection in the bloody days of the early Troubles. The father-of-five had taken over the shift of another man who was unable to go out on the night of November 4, 1971. He was gunned down by a British army patrol that claimed they came under fire.

Christy’s inquest was originally heard in April 1972 at Crumlin Road Courthouse and an open verdict was returned, with the Coroner describing the evidence as “confusing” and finding it impossible to determine if it was a “justifiable killing”.
However, recent research conducted by the Pat Finucane Centre uncovered correspondence from a legal secretary at the MoD which showed the MoD knew the victim was an innocent bystander. The document reads: “Christopher Quinn was shot when the army opened fire on a gunman, but it is fairly certain that Quinn was not involved with the gunman, but simply got in the way.”
Christopher’s daughter Roberta O’Neill says they are only interested in justice.
“The documents are between two barristers and say that it looks very bad that Christy has been killed and the case should be settled for around £10,000,” she said. “One says to offer her £500 and if she doesn’t accept that settlement they should bring my mummy into court and make her prove my daddy was an innocent man. This isn’t about the money but that shows that they knew he was innocent but were prepared to make her go to courts and make her prove that.
“We just want the truth.”

Christy’s daughter Christine Quinn says her mother’s dying wish was that her husband would get justice. “My mummy was a Protestant Sunday school teacher from the Shankill Road and there wasn’t a bit of bitterness in our house,” she said. “She couldn’t understand why my daddy was said to be a gunman and if she had have had the money to fight it she would have but she had to work three cleaning jobs to make sure we were reared properly. She said if she couldn’t get justice she’d be happy if we got justice. We just want the truth.”
Family solicitor Pádraig O’Muirigh said: “New witness testimony would assist an application to the local Attorney General. In particular, we are aware that a number of people, up to 16 or 17 in total, carried Mr Quinn from the scene when he was fatally wounded. We would like to take statements from these people if they are still alive. The original Coroner did not hear from these witnesses due to the flawed nature of the RUC investigation.”