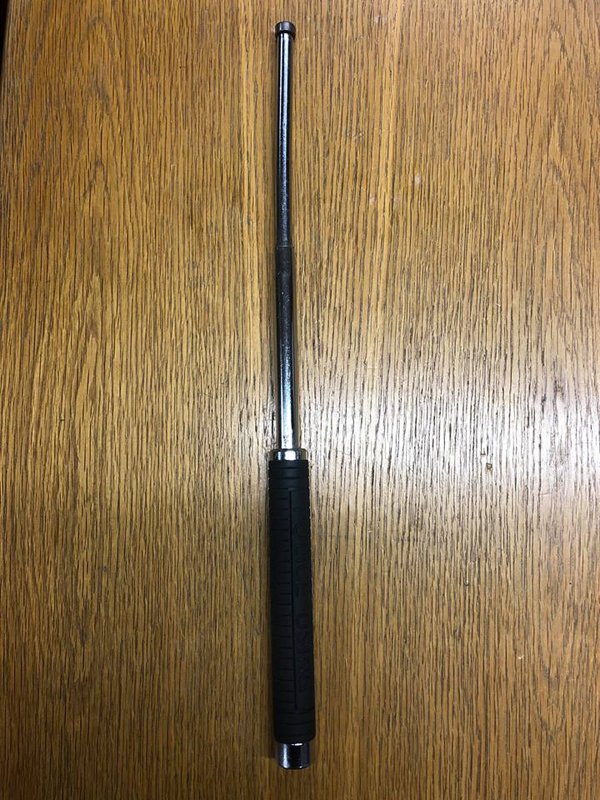 Police have confiscated a weapon from a teenager as part of a crackdown on organised fights in the west of the city.

The 16-year-old was found to be in possession of a baton after fleeing from officers on Saturday night in the Stewartstown Road area.

“Earlier tonight we were informed of the possibility of organised fights in West Belfast and that some of the young people may be carrying knives and weapons.
So having been out on the ground all night to deter and prevent any offences and anti-social behaviour we were just heading into the station to get ourselves ready for going home.

“As we were pulling up to the gate we noticed a young lad trying to hide in the bushes (never a good idea opposite a police station). When we went to see what he was up to, he decided to run off... another bad idea!

“I’m no athlete, but I do like an old foot chase from time to time to remind me of my advancing years. He didn’t get too far before he was collared, though.

“Now if a police officer was walking up to you would you run off if you were doing nothing wrong? Of course you wouldn’t. So why did this 16-year-old decide to run? Well, the answer is very simple, he was carrying a baton.

“As a result of his stupidity he was arrested for possession of an offensive weapon and conveyed home to the other side of town and left with his parents. He will be interviewed tomorrow and the disposal decided upon at that stage.

“This young boy had never been in trouble with police before tonight, not any more. One bad choice could affect your future! A criminal record could seriously affect your life prospects. Carrying weapons is dangerous for you, for others and is just plain stupid.

“With our great transport links now it’s very easy for large groups of kids to move from one side of town to the other, so parents you need to be aware of this and keep on top of it!

Local Sinn Fein Councillor Stephen Magennis urged parents to step up and start taking responsibility before someone gets seriously hurt.

“It was brought to my attention that a 16-year-old was found to have what we would call a flick stick in the Stewartstown Road area at the weekend and these are particularly dangerous as a lot will have a metal point and we have seen these used before in street fights where people are badly beaten,” he warned.

“There was talk of a number of organised fights at the weekend between Divis and Colin youths and it’s deeply worrying that young people are now carrying batons. By bringing these weapons onto the street they are simply asking for trouble.

“As a result of their actions this young person will now have some form of record for carrying an offensive weapon and for a 16-year-old to have that isn’t good. We don’t know the level of young people carrying weapons on to the streets but we would encourage them to stop before things get out of control and someone ends up seriously hurt or worse.

“I would urge parents to know where their children are and to take steps to ensure your children are well away from the large crowds gathering in these areas and are not taking weapons into the streets. If you think your child is out there go to the spots and see for yourself.”