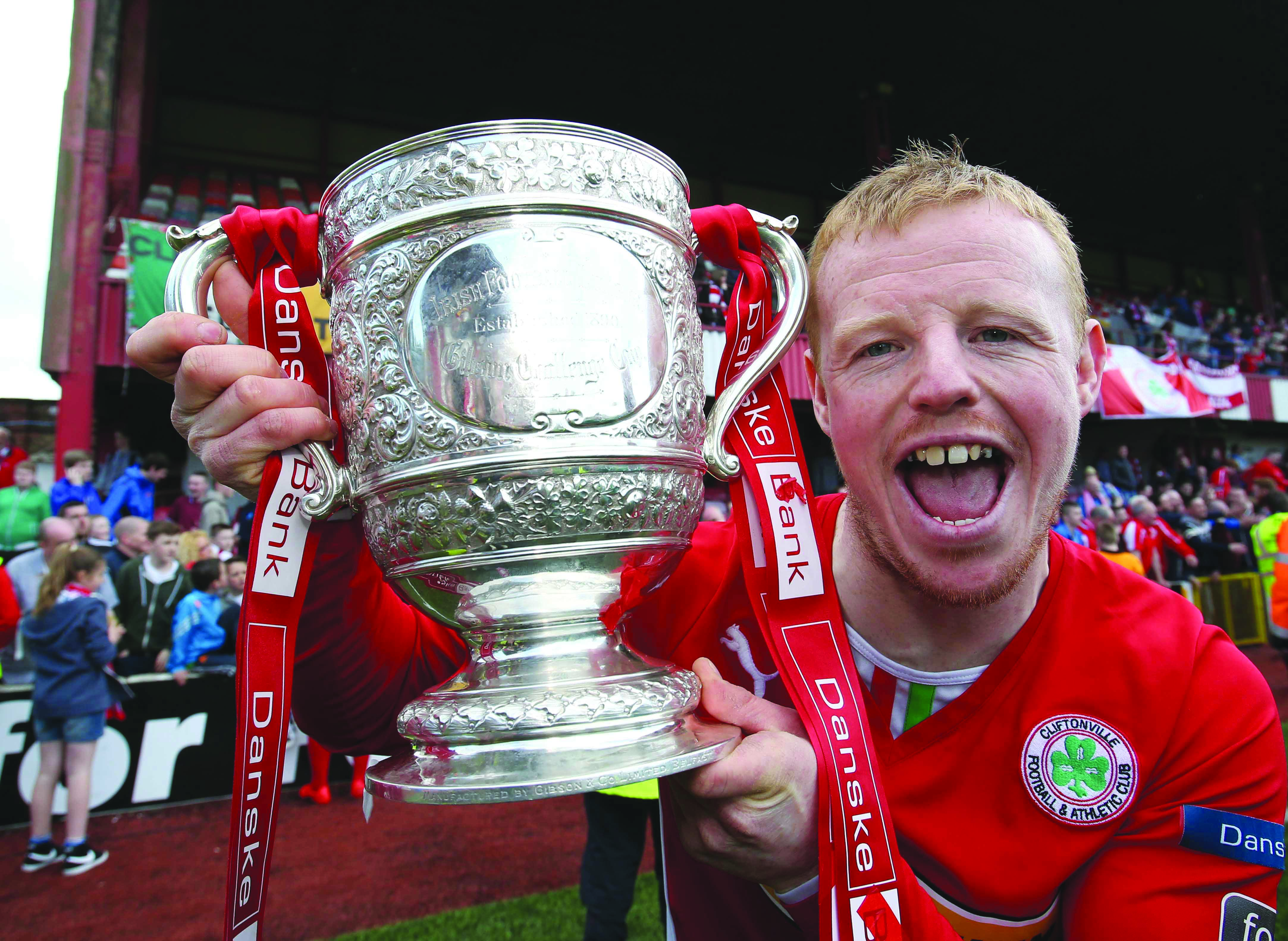 A TESTIMONIAL game usually marks the end of a great playing career but Cliftonville legend Geordie McMullan isn’t 100 per cent sure that he will hang up his boots at the end of the season.
Solitude plays host to his testimonial on Monday night (April 11) when Celtic come to North Belfast in what will be a repeat of the famous Champions League Qualifier clash between the clubs in 2013.
Thousands are expected to be in attendance to pay homage to the most decorated player in the history of Ireland’s oldest football club.
While the player himself is set on retiring when the season concludes at the end of the month, Reds boss Gerard Lyttle has other ideas.
“It is not 100 per cent certain yet – the Gaffer is still adamant that I am not retiring yet,” stated McMullan.
“I have made my mind up and I am planning to retire at the end of the season but it is not 100 per cent.
“I will have to hold off on that decision just yet.”
McMullan insists he doesn’t want talk of his retirement to distract the team as they bid to secure European football for next season.
“My plans are to retire,” added the Cliftonville skipper.
“Because of where we are in the league – we are still trying to qualify for Europe – it isn’t really something I want to be taking up the manager’s time with.
“It doesn’t really matter at the minute. We can put that onto the back burner.
“The most important thing is trying to focus on getting the team into Europe.
“If we do get into Europe, I won’t be putting off retiring just to play in Europe. It will be about whether or not the manager needs me.
“It will be a good chat to have but, at the minute, we are just concentrating on getting back into Europe.”
Should Cliftonville seal European football for the 2016/17 campaign, it would be a fitting consolation for McMullan, who is in his 16th season at Solitude.
The Reds have been unable to wrest the Gibson Cup back from their rivals, Crusaders this season following back-to-back titles in 2013 and 2014.
Cliftonville have won just five games from 13 since the New Year – a run of form which has seen them slip to fourth in the table.
Despite the poor run of form, McMullan is confident that the current squad is more than capable of challenging for major honours again next season.
“We are just not getting the rub of the green at the minute,” said McMullan.
“We just can’t put our finger on it.
“We know that we have a squad there that is capable of challenging for any trophy. It is just about trying to get things going again.
“There is no doubt that we will get back to challenging for trophies again.”
Former Linfield manager and current Ballymena boss David Jeffrey hailed McMullan following the Irish League clash between the sides last weekend.
“He is one of the greatest players of the Irish league,” said Jeffrey
“In terms of attitude, I have had the privilege of working with him in one of the Irish league select teams and he is an example.
“He is outstanding and you talk about characters and proper footballers, he is one outstanding individual.”
Normally one for shying away from attention, McMullan admits it will be strange being centre of attention on Monday night.
Singer/songwriter Paul Heaton of The Housemartins and The Beautiful South fame will be among the spectators along with a host of former Cliftonville players and managers.
After leading Cliftonville out for the two games against Celtic in 2013, McMullan is relishing the chance of playing against The Hoops one last time.
“The testimonial committee have put in a lot of effort with the chairman, Gerard Lawlor. They were trying to get a good team to come over and, after a lot of hard work, they have persuaded Celtic to come over,” said the Reds captain.
“It is massive for us. It was unreal back in 2013.
“The season before we played them, we were watching Celtic beat Barcelona 2-1 in the group stages of the Champions League. The next year, we are playing them in the Qualifiers.
“It was something we just couldn’t believe – it is right up there with the best memories.
“It will be a bit strange for me personally. It is my testimonial so the spotlight is going to be on me.
“I like to keep things shy and low profile. I don’t know how I am going to go about things on Monday night.
“All my family will be there, my wife and kids, so I am looking forward to it.”
Regardless of whether this season proves to be his last, McMullan is certain of one thing – Cliftonville will be his last club.
“I never took it for granted that I would play this long,” added McMullan.
“I always give my all. . . I love the club, I love the fans and I love everything about the place.
“It just went hand-in-hand with me.
“I never really thought about whether I wanted to finish my career here. Now it is getting to that stage, I would never play for another Irish League club.
“This will be the last club I play for and I will finish my career here. I play for Cliftonville and I love it.”