‘We’ll put you in intensive care’ 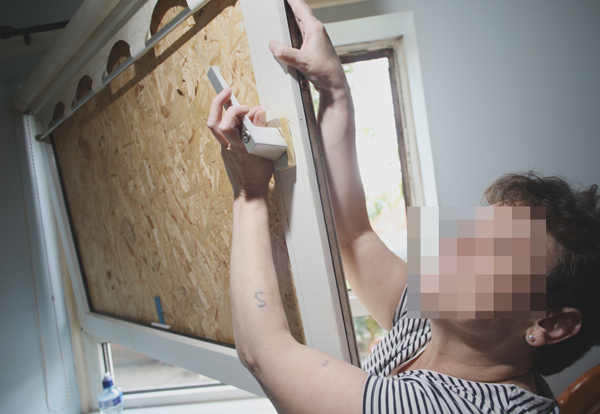 The mother of one shows where her house was attacked

A woman who had her bedroom window smashed and was threatened with extreme violence says the New Lodge has been handed over to thugs who are running amok and not being challenged.

The 57-year-old mother-of-one, who does not want to be identified, says she has been left living in fear after the bedroom window of her ground floor flat was smashed on Sunday past. She says this is just the latest attack on her home and she is afraid to look out her window in case they see she’s at home and the abuse and attacks begin again.

“They look out for me and shout my name and it’s constant. The night they smashed the window I was going out for a smoke but they saw me and started climbing the fence to get into me. They were screaming at me and they told me they would put me in the intensive care unit.

“Then one of them picked up a brick and smashed the window.”

The woman says she tried to approach the father of the youth who smashed the window but he didn’t want to know. “He actually told me it was his kid, so what can I do?”

She said the thugs have become emboldened since this year’s August 9th bonfire.

“They were allowed to light that bonfire and since then they think they own the place. They can do what they want. I had to go and live at my friend’s house for a week because my nerves are gone. The attacks and the shouting at me are constant and I am finding it hard to take. I am on medication now. I need out of here.”

The woman’s pleas come as concerns are raised in the area at the proliferation of illegal fireworks.

The North Belfast News understands that a 17-year-old from the Bone is travelling to the New Lodge every night with a backpacks full of illegal fireworks which he is selling to young people for as little as £3 a rocket. The fireworks are at times being fired at pedestrians, according to Kate Clarke from New Lodge Safer Streets.

“They think it’s funny but someone could be seriously injured,” she said.

Kate agrees that a lack of action on the August bonfire has contributed to the growing anti-social problems.

“Since then they have burnt the traffic lights on North Queen Street and every item of bulky waste left out for collection by the Council is taken and set alight. A youth worker asked them why they were burning an old suite of furniture and they said ‘Because we can.’ They have no fear of anything being done about it.”

A PSNI spokesman said they were investigating the attack on the flat.

“Police are investigating an incident of criminal damage at a property on Queens Parade in North Belfast on Sunday 25 September.

“Shortly before 10.45pm it was reported that a window of a property in the area had been smashed. Police are appealing for anyone with any information about the incident to contact officers in Tennent Street on 101. Information can also be passed anonymously via the independent charity Crimestoppers on 0800 555 111.”