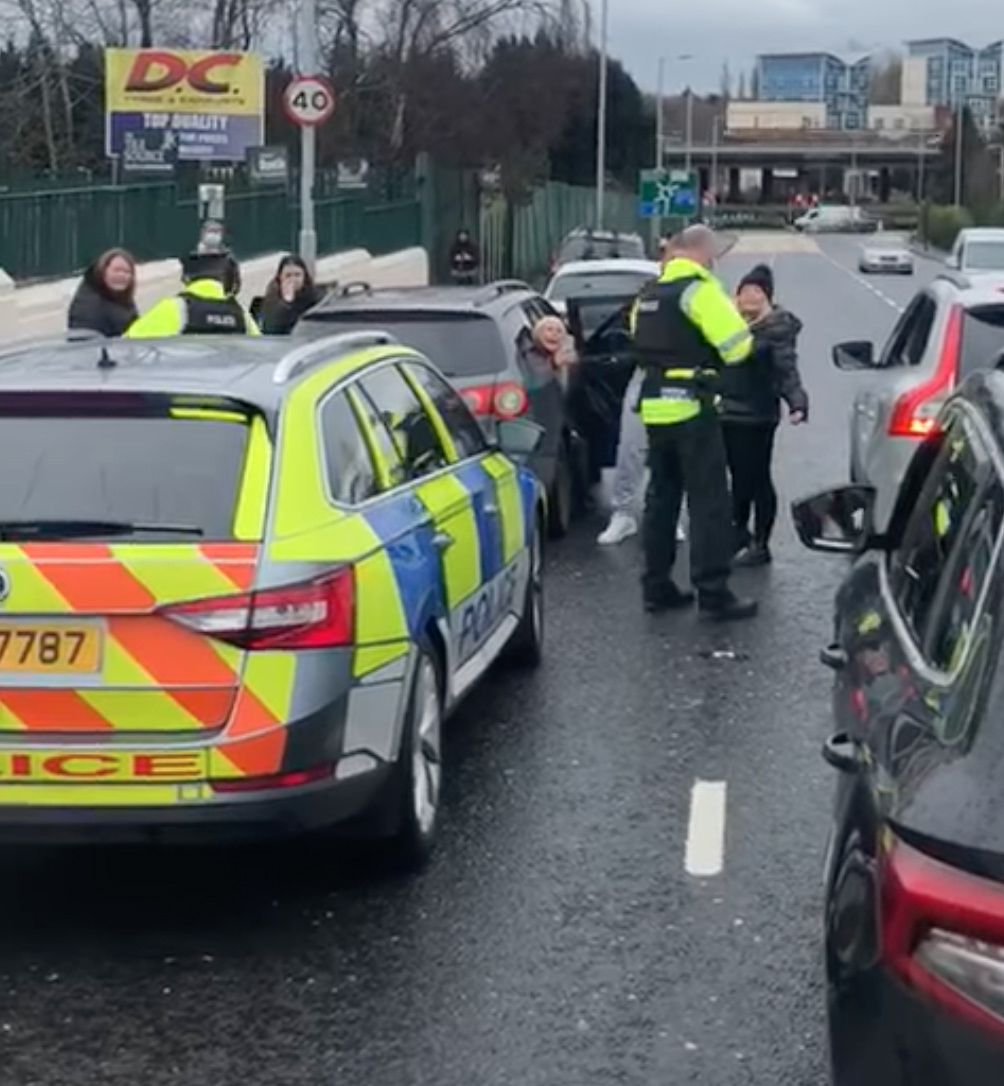 A WEST BELFAST man has expressed his 'disgust' after the PSNI grappled mourners at his mother’s funeral.

PSNI officers were filmed as they stopped the funeral cortege of Turf Lodge woman, Rita McKernan (85), as it made its way down Kennedy Way yesterday (Thursday).

Footage of the altercation shows an officer grab one man with both hands before pushing him a number of yards and forcing him against a police car.

Mrs McKernan’s son, Patrick McKernan, said that police had maintained a presence at his mother’s wake in Norglen Parade since her passing on Monday.

At present, there are restrictions on the number of people who can attend a funeral due to Covid-19. Speaking to the Andersonstown News, Patrick said his family had abided by the rules.

“They were actually on the phone on the morning my mummy was taken into the house ringing the undertakers and telling people to keep their distance,” he stated.

“We did all of that, we were actually on the Turf Lodge Facebook asking anybody who was coming to pay their respects to stick by the rules.”

He added: “We actually broadcast it over the speaker at the funeral as well.

“They (police) knew that we were doing everything that we could to keep within the regulations, but at the end of the day we’re not there to police my mother’s funeral.”

Patrick said the police “never left the house” during the wake and had grabbed one of his nephew’s “by the throat” during the incident on Kennedy Way.

He told how the PSNI were also present in the cemetery as Mrs McKernan was buried.

“There were four or five cop cars in the cemetery as well,” he said. “It was just pure harassment.”

Police interference in Mrs McKernan’s funeral comes just weeks after the PSNI drew criticisms for its heavy presence at a wake house in the Divis area. Up to eight police vehicles attended the wake of Karen Weir on January 14, while members of the IRSP were also searched after paying their respects.

As a member of the IRSP, Patrick insists that the targeting of yesterday’s funeral was politically motivated.

“It boils down to the fact that I’m a republican. People can say it was because of Covid, but the way they were getting on was because they wanted to turn round and say ‘we’re policing this’. They wanted to police my mummy’s funeral, but we wouldn’t let them.”

It boils down to the fact that I’m a republican. People can say it was because of Covid, but the way they were getting on was because they wanted to turn round and say ‘we’re policing this’. They wanted to police my mummy’s funeral, but we wouldn’t let them.”

He stated: “They wanted to make the family feel uneasy, but we didn’t let them.”

Patrick said his family had limited the number at Mrs McKernan’s funeral Mass in line with government Covid guidelines and had voluntarily limited the amount of people at the cemetery.

“The thing that annoys me about the whole lot of it is that we stuck to the rules – 25 in the chapel, and 25 went to the cemetery,” Patrick said.  “We asked people not to go and to just let our family go and bury my mummy – that’s what we did.”

He concluded: “To be honest, I feel disgusted at what they did to our family yesterday. The hatred I have, and that my family has against the RUC is unbelievable. They wouldn’t let us bury our mummy in peace.”

In a statement, the PSNI said it had carried out an “overt evidence gathering operation” at the funeral in accordance with Covid restrictions.

Chief Inspector Peter Brannigan said: “An overt evidence gathering operation was in place and images gathered from this event will be used for the purposes of prosecution, where the Health Protection Regulations have been breached.”

“It is our view, that the constant PSNI presence around both the wake and the funeral itself was due to Rita's son Patrick being a member of the IRSP.

“After recent images of dozens of loyalists casually walking around East Belfast and a recent loyalist funeral where hundreds had been in attendance and clearly not adhering to social distancing guidelines, with no PSNI interference in both instances, it begs the question – to who's tune and agenda is the PSNI playing to by attacking wake houses and funerals in nationalist communities over recent weeks?"