When McNamara’s Band were kings of the local music hall 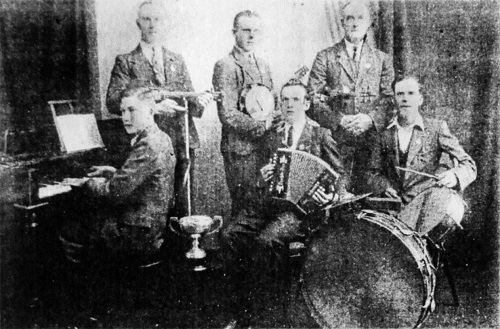 “OH, my name is McNamara, I’m the leader of the band. Although we’re small in number, we’re the best band in the land.”

These are the opening lines of the famous song McNamara’s Band. When I was growing up this song vied in our neck of the woods with The Boys from the County Armagh as a favourite and all of us knew the words.

To my mind it was a local song. Jimmy McNamara was a second cousin of my mother and he called every Friday to our house as an insurance agent. Jimmy was a bachelor and my mother always had a meal ready for him. I used to sit in the corner pretending to be reading but listening intently to the craic. They got on well on every topic under the sun – except for politics. Jimmy Mac, as we called him, was an ardent Hibernian. He was pipe major in a reasonably good pipe band, Blackwater and Benburb AOH Division 203, which had the privilege of leading the St Patrick’s Day parade in New York in the 1960s. My mother had absolutely no time for Hibernians and often gave her opinions to Jimmy.

“Rose, you were watching us parade last Sunday, you were at the door as we passed down the street,” Jimmy told her.
“Not only was I looking, I was laughing, for your face gets redder and redder as you pass here,” she chided him, and indeed I thought this to be true. Jimmy had a ruddy appearance but I firmly believed that the intensity of his complexion went up a few notches as he paraded past our house. As there was also an independent pipe band in the village we dubbed the AOH outfit McNamara’s Band. Not only was Jimmy a piper but he was also a fine fiddle player and the leader of a ceilí band. Again there were two ceilí bands in the village – the renowned McCusker Brothers and the real McNamara’s Band. Ironically, the McCusker Brothers with nine instruments did a more lively version of the song.

We were expressly forbidden “to darken the door of the Hibernian Hall” but myself and my brother Fergus were known to sneak into the monthly dance on occasion. Jimmy’s outfit played not only ceilí music, but a mixture. They struck up their programme with a lively military two-step and the drummer, Jimmy Murphy, kicked up a powerful racket when they played their signature tune. Since they had been in existence from the early 1930s, I was convinced for a time that Jimmy had written McNamara’s Band.

In fact, the song was written in Belfast. The manager of the Alhambra, John J Stamford, watched Willie John Ashcroft’s routine when he first took over the music hall in 1879. He noted his versatility – he sang, he cracked jokes he played flute, violin and other instruments, all the time banging a drum with the knob of his walking stick and he was an accomplished dancer adept in jigs and reels and heavy clog dancing. He had great success with The Solid Man which was sung to an old Irish air. As well as appearing regularly in the Alhambra, Ashcroft appeared no less than 15 times at the top of the bill in Dan Lowrey’s Star of Erin Music Hall in Dublin.

Stamford knew that Ashcroft needed a new song and while he had success with Norah Kearney, McGinty the Swell of the Sea, Just Pay Your respects to McGuinness, and others, it was here that he premiered the number designed to display both his vocal gifts, his versatility on many instruments and his dance routine – the original one-man band.

McNamara’s Band was an immediate hit in Dublin, which was just what Ashcroft needed as Stamford, who as manager had made the fortunes of the Alhambra where others had failed, resigned his post to take over the Shakespeare Inn.

As often happens to famous Irish airs, it was recorded by an international singing star. In 1946 Bing Crosby and his backing group, The Jesters, recorded a version of the song and had a top ten hit. As a result it features regularly in America on St Patrick’s Day shows. It’s a song which is often parodied. A couple of years ago Niall, the ballad singer in Lloyd’s, Amiens Street, struck up,

“Oh, my name is Brendan Behan, all my books are banned.
“You can’t get them in the library, you have to buy them second hand.”