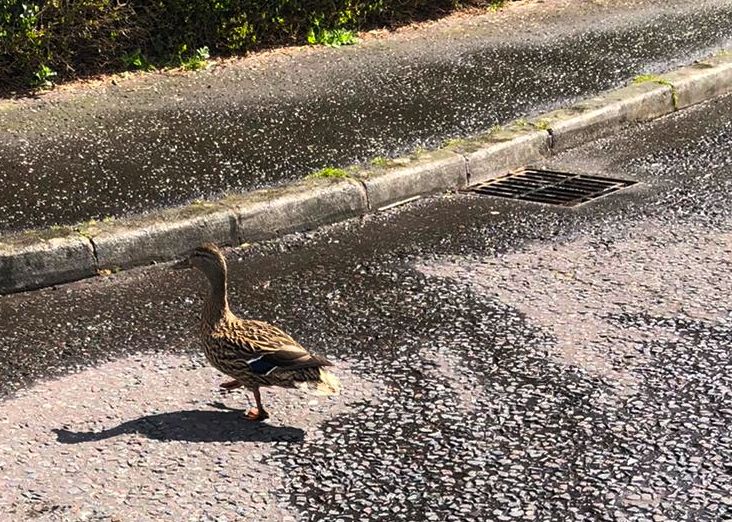 PET RESCUE: It was a case of all hands to the pump to help save this little duck family on Cavehill Road on Saturday afternoon

It’s the miracle of North Belfast.

Nine ducklings saved by band of neighbours who just wouldn’t give up.

The drama started when a trail of ducklings walked out onto the road in front of mum-of-three Paula O’Brien on Saturday afternoon near the top of Cavehill Road.

Paula and husband Dave were going to drive on – until they noticed a big black cat ready to pounce.

Paula asked Dave to pull over so she could shoo the cat way, which she did. But then a strange thing happened. The duck and her seven ducklings refused to budge.

Paula told Dúlra: “We have a pet carrier in the back of our car because we have two dogs, so I said to Dave, why don’t we try to get them all into the pet carrier and we could drive them down to the Waterworks and let them go there?

“So that’s what we tried to do – we got all of the ducklings into the pet carrier, but we couldn’t get the mother. She didn’t want to be caught. She was flying up in the air, hiding in hedges, going into people’s gardens – she would not be caught.

“We even got a blanket out of the car to try and throw it over her. This went on for at least half an hour – us trying to catch her.

“We were scratching our heads about what to do – next thing, I nearly died when I looked down the grating and there were two wee baby ducks swimming around in the water and cheeping away. So that’s the reason why she wasn’t moving!

“We’d heard them cheeping earlier and I was looking under the car!’

By this stage a group of neighbours had gathered to help. One guy got a crowbar from the house but the grating wouldn’t budge.

Paula called the RSPB and RSPCA – “but it was Saturday lunchtime and offices just have their answering machines on."

Finally, someone suggested calling the Fire Brigade. “I was like – 999?” said Paula.
“Literally three minutes later the firefighters showed up – I heard one of them saying they’d spent the morning fighting a giant blaze in Carrickfergus. They had the grating cover lifted in seconds and took the wee ducks out and put them in the back of the pet carrier.

“But the mother still wouldn’t get into the carrier – so I suggested to Dave that if he walks with the wee ducks in the people carrier, why don’t we see if she follows?

“And that’s what we did. The fire engine was in front, Dave walking behind carrying the baby ducks cheeping in the pet carrier, and then the mummy duck waddling along as good as could be behind.

“The firefighters parked their fire engine across the junction of the Cavehill Road where the Spar is so that no traffic could get across while we were doing this!

“The guy Jackie who phoned the Fire Brigade said there was a river in the back of the houses in Sunningdale Park which back onto the golf course, and so we randomly picked a door to rap to ask if we could go through their garden.

“The first guy welcomed us in – so we brought the baby ducks and the mummy ducks round the side of the house and through his garden, then opened the gates down into the golf course.

“The mummy followed us and she went straight down into the river and was sitting in the stream waiting on them. We had to tell the golfers to stop golfing and we opened the carrier and they went down – all nine of them!”

The whole episode took a hour and a half, involving many neighbours, passers-by and even the heroes of Westland Fire Station.

The river leads all the way to the Waterworks, where the young mallards will brighten the lives of the many visitors, including Dúlra. All thanks to Paula and Dave and the other neighbours who saved them.