‘Why was our offer to end tyre-burning on bonfire turned down?’ 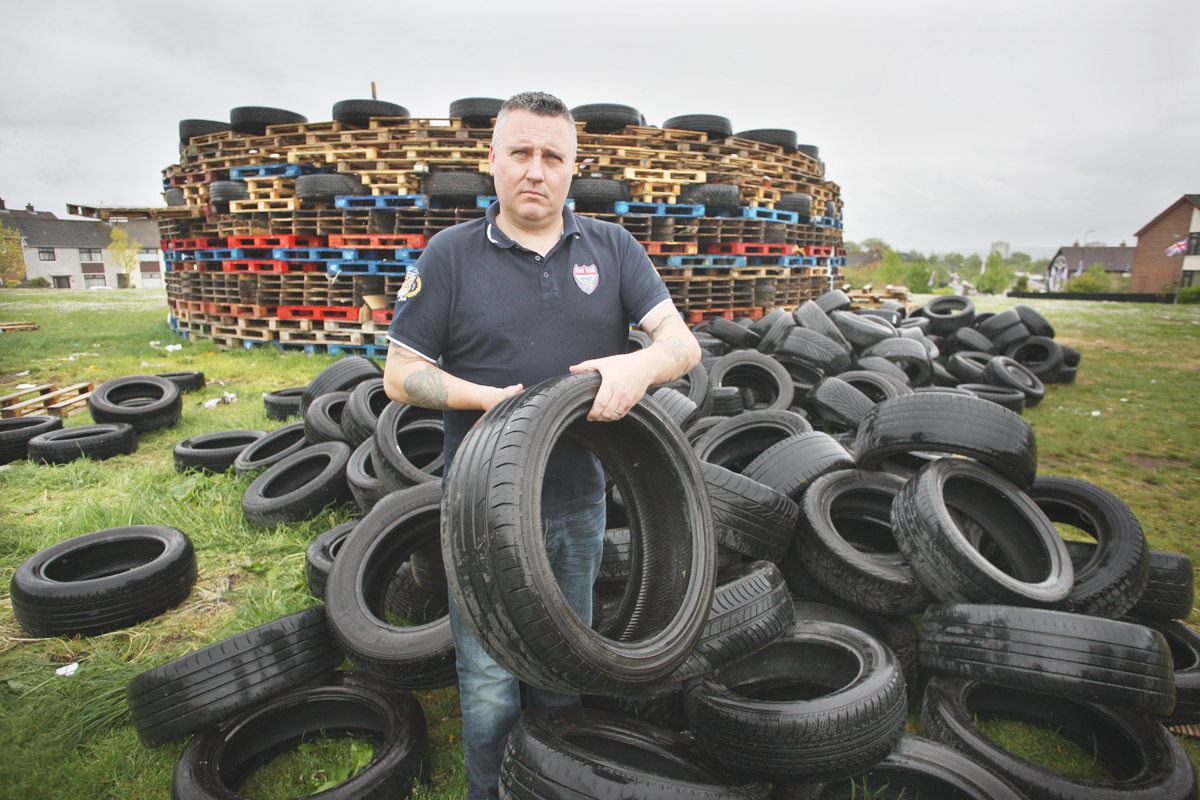 Phil Hamilton at the Rathcool bonfire

A Newtownabbey community worker has accused the Housing Executive of ignoring their responsibilities after they rejected a deal that would see the removal of around 200 tyres from a notorious bonfire site in the heart of Rathcoole.

Last year the bonfire, located in green space on the East Way road, gained massive media attention after residents complained that youths had begun collecting as early as April.

As a result the bonfire is not included in the Bonfire Management Scheme, a multi-agency strategy that sees funding awarded to encourage communities to improve bonfire management.

Community worker Phil Hamilton, who regularily engages with local youths in an effort to bring them in line with the protocol, which includes not burning tyres and not collecting wood until mid-May, accused the Housing Executive of failing to be pro-active in their efforts at bonfire management.

“Last year a spotlight was shone on the bonfire in Rathcoole but the media attention focused on the negative and not on the work that has been carried out to engage with these youngsters,” he said.

“This year, myself and many others in Newtownabbey have again been engaging with bonfire collectors with a great deal of success. We’re being asked to go out and engage within our communities but when it comes to the end result there is no support from the statutory agencies.”

Mr Hamilton said that earlier this week he had brokered a deal with those responsible for collecting the materials and they would be happy to hand over the tyres in return for small scale fun day.

“The Housing Executive rejected the idea stating that the particular bonfire was not part on the Management Scheme. This pot of funding is there but there is no attempt to be pro-active with it. By not acting this year the cycle will continue next year. We had here a chance to bring this particular bonfire in line with safety protocol but the Housing Executive have failed in their responsibility to local residents.”

A spokesperson from the Housing Executive said: “Bonfires are traditional events and we aim to work with local communities to try to ensure they are safe and pose no damage to local property.

“This has been successfully achieved in a number of areas across Northern Ireland. If a group has agreed to the bonfire protocol and no bonfire materials are on site before May 15, 2015 the Housing Executive is able to look at such an application for financial assistance.

“Under the Better Bonfires Initiative financial assistance of up to £500 can be provided within a partnership approach with other public agencies.

“With regards the East Way bonfire at Foyle Hill we understand that to date the community group has not signed up to the bonfire protocol and substantial materials, including tyres, were on site prior to May 15. However, the Housing Executive is happy to facilitate a meeting to positively progress matters with an aim of reaching a mutually agreeable outcome.”