Woman says she is victim of bonfire builders 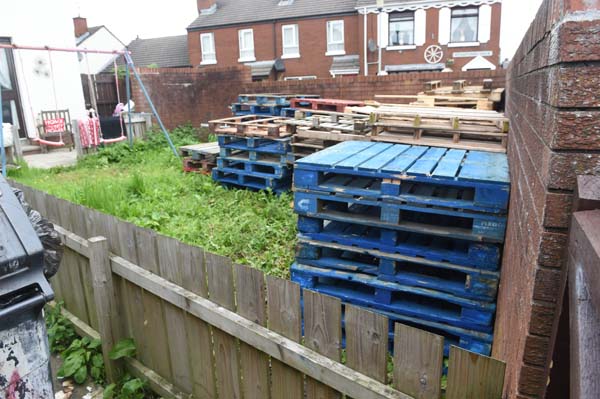 The pallets stored in an Oldpark garden have now been removed

A woman living in the Oldpark who had around 50 pallets removed from her back yard by the Housing Executive has said she has no idea who was storing them at her house.

Efforts by August 9 bonfire builders to collect wood have been intensifying and they have been involved in a cat and mouse game with statutory agencies who are trying to prevent the fires being built.

The practice of commemorating the introduction of interment in nationalist areas with fires has largely died out but a hard core of youths in the Oldpark and New Lodge continue to build bonfires which are associated with anti-social behaviour, drinking and drug taking.

The mother-of-two denied she was supporting the bonfire builders, telling the North Belfast News she was relieved at the removal of the pallets.

“People I don’t know put them in my garden,” she said. “They got in because there was no padlock on the gate but the Housing Executive have put new locks on so they can’t get back in. I’m happy to see them gone.

“I don’t support bonfires – my wee girl is six and I wouldn’t bring her to see one, I have no interest. The Housing Executive came and I let them in. They told me they had tried to remove them before but they were threatened. But they should have come to me and I would have let them in.”

A Housing Executive spokesman confirmed they had removed the pallets.

“We can confirm that our staff attended a property in the Oldpark area as we received reports that pallets were being stored in the garden of a house in this street.

“A site inspection today has confirmed that the pallets have now been removed from the garden.”

Local Sinn Féin councillor Mary Clarke said tenants should be aware that storing such material could have a serious impact on their tenancy agreements.

“Local residents have repeatedly made their views known that they are opposed to bonfires and the related anti-community activity associated with them,” she said. “Many people who were interned in the early 1970s have also been to the fore in opposing these bonfires and that argument has been won convincingly. In fact those involved in these last few bonfires are mainly a small minority of young people without any argument for bonfires that stands up to scrutiny. I’m appealing to anyone that knows of wood for bonfires being stored to let that be known so it can be safely disposed of in the days ahead.

“It is completely irresponsible of any adult to assist in these anti-community displays which put children's welfare at risk and make people’s lives a misery. Great work has been done to reduce these bonfires down to a small number these days and I look forward to a time when the energy spent gathering wood can be channelled into constructive community activities by those involved.

“Lastly, it’s important to note that if your property is being used for the storage of these bonfire materials or if you are using this community to dump your rubbish for burning there are legal penalties which will be enforced by statutory agencies.”