30 years of Féile gets a festive twist at the Balmoral 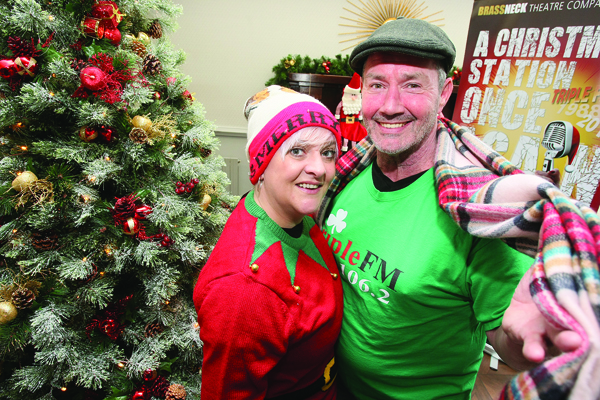 A PRODUCTION chronicling thirty years of Europe’s largest community festival, Féile an Phobail, is pulling on its Santa jumper and matching hat as Brassneck’s A Christmas Station Once Again parks its sleigh for one week only at the Balmoral Hotel.
The play, which resurrects the heady days of summers past, when the sound of TripleFM/Féile FM filled the airwaves, condenses 30 years of history through the nostalgic eyes of our hosts Fra and Bridie, played by Jo Donnelly and Brassneck stalwart Marty Maguire. Playing over 50 characters between them, Jo and Marty are still being stopped by fans eager to catch another viewing of the production such was its success during a run at the Roddy’s in August.
“We wanted to bring the play back as we have such a successful relationship with the Balmoral Hotel, especially in the run-up to Christmas,” explained Brassneck Director Tony Devlin. “This will be the fourth production we have brought to the hotel. There has been huge demand for a return of the show, as a lot of people didn’t get a chance to catch it first time around. We thought it was the next natural step to bring it to the Balmoral.”
Jo spoke of how from the first night the play was staged “we soon realised very quickly that this was something special.”
“The audience response was incredible after opening night,” she said. “People are still stopping us saying ‘When are you coming back, when are you coming back?’”
“I think it’s a perfect way to finish the year especially after all the celebrations for Féile,” explained Marty. “One of the loveliest things was the audience reaction we got when we travelled to Coalisland. The audience there, who might not have been all that familiar with the beginnings of Féile, gave us a standing ovation, they were bowled over by the Féile story. To have a Christmas slant on it is just the icing on the cake. The performances in December will be a chance to raise a glass and tip the hat to all the people who created the festival combined with the celebration of Christmas,” he said.
“The play starts with our two protagonists waiting to get into heaven, it will be a nice Christmas gift to find out if Fra or Bridie get into heaven or end up in limbo in Larne,” he laughed.

A Christmas Station Once Again will be performed at the Balmoral Hotel from December 18 to 23 at 8pm. Tickets are priced at £10 and are available from the hotel or by telephoning 02890 301234.