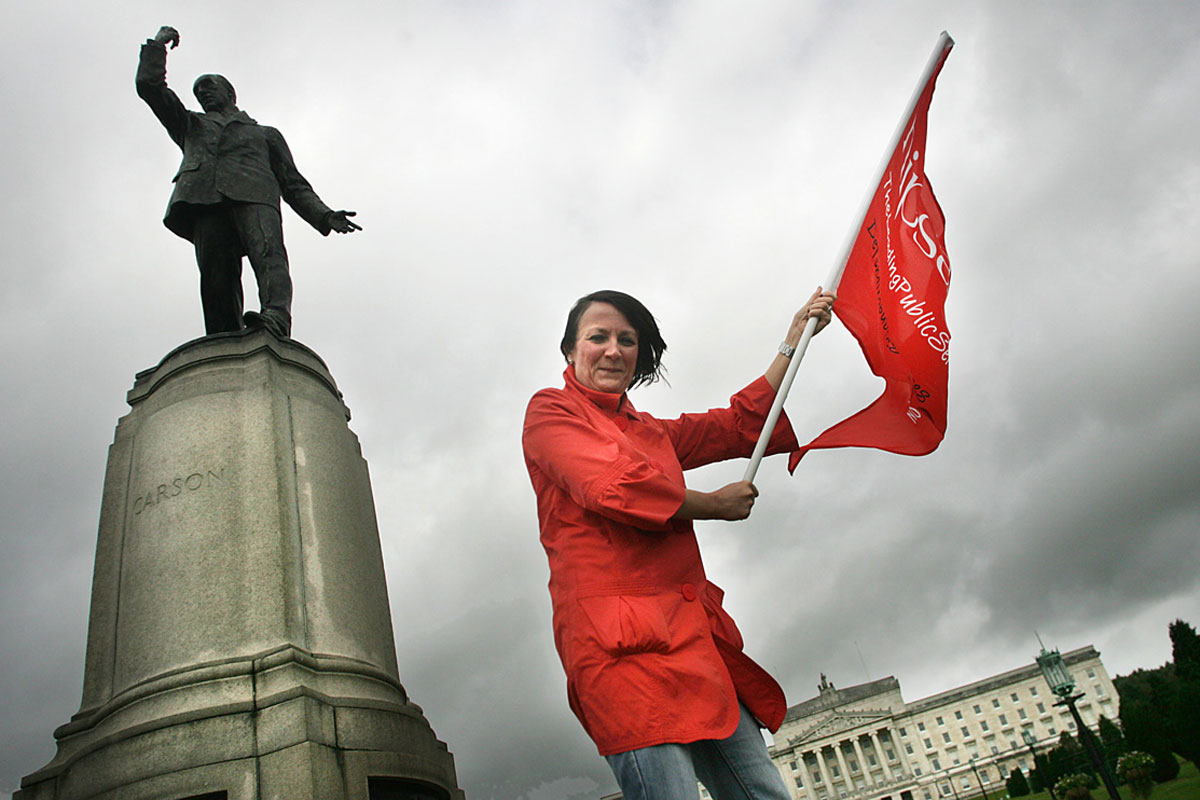 THE Health Service union Unison says it fears the number of jobs set to go at the Royal Victoria Hospital in the forthcoming round of cuts could rise to nearly a thousand.

The big jump in the number of feared job losses is down, says the union, to unforeseen costs in the implementation of a Health Service-wide adminstration streamlining body.

“We could be looking at 300 job losses on the Royal site alone,” said a union official. That would be a crippling blow to the West Belfast economy.

HEALTH workers’ union Unison claims 300 more jobs could be at risk at the Royal Victoria Hospital because of Belfast Trust spending cuts and unforeseen costs incurred by a new money-saving scheme aimed at streamlining business services across the Health Service in the North.

Unison’s Royal Victoria Hospital Joint Branch Secretary Raymond Rafferty was speaking to the Andersonstown News after the union gave its verdict on the Belfast Trust’s spending plans for the coming year, brought in to deal with extensive public sector cuts.

In a Unison document sent to the Andersonstown News, the union had originally predicted that the cuts would signal the loss of up to 650 jobs across the Belfast Trust, including the loss of 11 maternity posts and 20 admin and clerical jobs.

However, the union claims with the unforeseen costs in the setting up of a organisation aimed at streamlining business departments across the Northern Ireland Health Service, this tally will rise to 900 in Belfast alone, 300 of which could go in West Belfast’s Royal Victoria Hospital.

“The Business Shared Services Organisation (BSSO) is being set up to centralise the work of all the trusts in the North – departments such as Human Resources, Admin, Pay Roll and Finance,” said Mr Rafferty.

“We have now learned that unforeseen costs in the implementation of this organisation – that’s just setting it up and not accounting for the costs of the disposal of staff – is as much as £1.78 million in the Belfast Trust area alone and could potentially lead to up to 900 job losses across the Belfast Trust area. As the Royal Victoria Hospital takes up to a 30 percent of Trust staff, including the bulk of these business departments, we could be looking at 300 job losses on the Royal site alone.”

If these job cuts go ahead, Mr Rafferty said it would have a devastating impact on the West Belfast economy.

“75p in every pound earned by staff in the Royal is spent in the local area, so that will definitely have an effect in West Belfast,” he said.

“It will be a great loss to the West Belfast economy, an area that is already quite impoverished.  The Trust does not realise that these cuts don’t just affect the staff that work there, but the people in the surrounding areas too.”

For the first time in 30 years, Unison is currently balloting its members across the North  on whether to take strike action against stringent cuts in the public sector budget here over the next four years to cope with a shortfall of £828 million. These cuts could lead to the loss of 4,000 jobs.

If successful the ballot, which is set to close on September 20, could see the Royal brought to its knees during a proposed strike action in early October, as upwards of 3,000 of the 7,000 staff members there are Unison members.

Speaking about the ongoing strike ballot, Mr Rafferty said the union had been getting a “positive response” from members during recent meetings at the Royal.

“We have been getting very positive feedback from members who have said they intend to support the Yes ballot for strike action,” he said.

“There’s a real determination there to not only protect the staff and their jobs, but to protect the services that are so vital to local people.”

A spokesperson for the Belfast Trust expressed disappointment that Unison had spoken out last week on upcoming cuts “without discussion with the Trust”.

“The Belfast Trust believes it has a good working relationship with all relevant staff side organisations,” said the spokesperson.

“The Belfast Trust has always been open and transparent about all the issues and they are the subject of discussion at our Trust Board meetings, which are open to all members of the public to attend.”

In response to Unison claims about the unforeseen costs of the BSSO increasing potential job losses, the spokesperson said that the BSSO would affect all Trusts in the North – and not just Belfast.

“BSSO is still a work in progress and is a regional issue that does not just affect the Belfast Trust,” said the spokesperson.