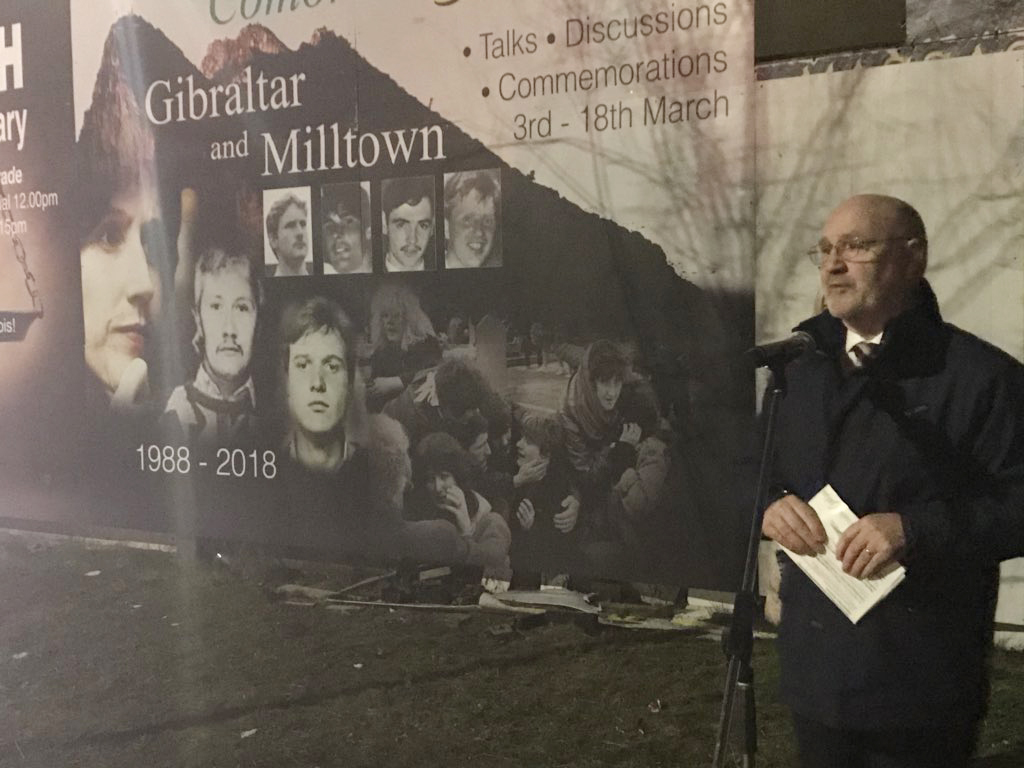 A MURAL was unveiled at the Andersonstown barracks on Tuesday evening to commemorate the 30th anniversary of the Gibraltar/Milltown killings.

As the crowds gathered at the site Sinn Féin MLA Alex Maskey said: "This year is the 30th anniversary of the executions in Gibraltar of Maireád Farrell, Dan McCann and Seán Savage.

“It is remarkable to see the turnout and it is testament to the feeling within the Republican community still.

“We as republicans are proud to remember the sacrifice of these brave people.

“This period of 1988 was a very sad and awful time. Seán, Maireád and Dan were murdered in Gibraltar, in the days that followed Kevin McCracken was killed in Turf Lodge and then at the funeral in Milltown Thomas McErlean, John Murray and Caoimhín Mac Brádaigh were killed with around 60 people wounded.”

He added: “When the three bodies were returned to Ireland on 14th March I travelled with Mr Savage. Thousands of people lined the streets from Dublin to Belfast despite intense abuse from British state forces in an attempt to intimate.

“This makes us realise the ferocity of British state violence and collusion with unionist death squads that was directed at our community 30 years ago.

“The relatives of Seán, Maireád and Dan, unsatisfied with the response to their case by the British legal system, took their case to the European Court of Human Rights in 1995. The court found that the three had been unlawfully killed. This case became the benchmark for legacy cases and has helped many other families in their quest for truth and justice.

"The events of 1988 and the people we lost did not deter republicans then and it certainly doesn't deter us now.

“We are proud to remember those who lost their lives, their legacy has inspired and will continue to inspire us and make us determined to work towards everything they died for an Ireland where all citizens can live in freedom and with equality.”