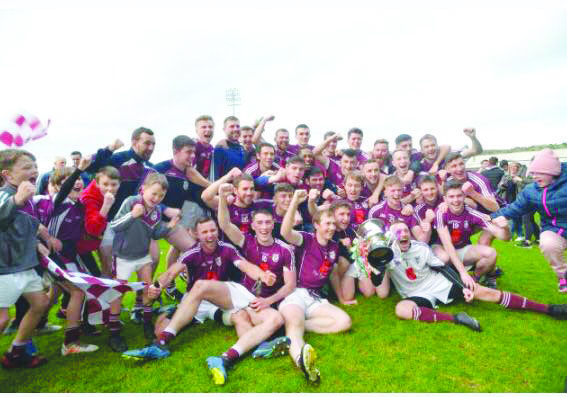 The Bredagh players celebrate their victory with some young fans

BREDAGH dug deep to hold off a late Liatroim surge to deservedly win their second Down Intermediate Football Championship title in three seasons at Pairc Esler on Sunday.

While it wasn’t as much of a shock as their 2016 triumph over hot favourites An Riocht, it was arguably a victory which called much more upon their reserves of character.

The pace and power of Parador man-of-the-match Conor Francis, the accuracy and leadership of skipper Donal Hughes (who scored 1-10), the doggedness of the defence led by Tommy McElroy and Kevin Dornan, the tireless hard work from everyone with a harp on their jersey, and the preparation and guidance from the management team were central to securing the trophy.

Over the balance of the hour the Harps were by far the better side, and after 38 minutes led by 12 points.

But a determined and talented Fontenoys outfit refused to submit and gradually clawed their way back into contention to set up a grandstand finish and an anxious final few minutes.

Anything other than a Bredagh win, though, would’ve been an injustice.

Time and again in the first 40 minutes they carved Liatroim open, creating chances and taking them with assurance and clinical efficiency.

A nervy start saw both sides miss chances, but Liatroim did find their range through Miceal McCartan and Liam Doyle to go 0-2 to 0-0 ahead after six minutes.

Two minutes later a sublime Cormac Hughes score off the outside of the boot settled Bredagh, and quickly afterwards Francis surged through the heart of the Fontenoys defence before deftly handpassing across for Donal Hughes to palm to the net.

Liatroim did have a fisted effort come back off the crossbar, and two more scores from McCartan brought matters level by the 18th minute, but two frees from Donal Hughes eased Bredagh back in front.

Another McCartan free on 26 minutes cut the deficit to a point, 1-3 to 0-5, but 60 seconds later Francis once again cut through at pace after taking a fine catch, and his pass to Sean Blaney was superbly dispatched to the bottom corner of the net.

Two more Hughes frees extended the lead, with McCartan closing out the half with a score to leave Liatroim behind 2-5 to 0-6 at the break.

Bredagh were simply sublime upon the restart, adding 1-4 without reply.

The goal on 35 minutes was a great finish from Declan O’Hara after yet another surging foray upfield from McElroy had cut open the Liatroim defence.

Two more Donal Hughes points, including a monster effort from distance, put the Harps into a 3-9 to 0-6 lead and the fat lady was clearing her throat.

But Liatroim sparked into life and showed all their battling qualities from then to the final whistle.

Within the next 10 minutes they’d notched up five points in a row through McCartan, Conor McCrickard, PJ Davidson and two from the impressive Pearse Og McCrickard - his second point a shot on goal which just cleared the bar.
McCrickard was unlucky a minute later to see his effort somehow come back off the inside of the post when the fierce shot seemed a certain goal.

Donal Hughes interrupted their scoring with a fisted point, but the Fontenoys had the bit between their teeth.
Another Davidson score was followed by a goalbound drive from former county star Doyle, brilliantly pushed round the post by Odhran Devlin.

With seven minutes of normal time left Davidson added his third of the afternoon, bringing them within six points, 3-10 to 0-13.

The irrepressible McElroy capped an impressive display with a fine score but Pearse Og McCrickard was by now ‘in the zone’ and added two more points to bring Liatroim within five.

Captain, Hughes showed all his strength and precision to notch a fabulous left-footed point and with only a minute left Bredagh seemed home and hosed at 3-12 to 0-15.

However, a quickfire unanswered 1-2 in injury time, the goal scrambled in by Doyle as the crowd’s attention was focused on a continuing scuffle upfield, meant Bredagh only led by two.

With Harps fans by now watching through their fingers, up stepped supersub Matthew Hamilton to seal the deal, recovering from dropping the ball to gather possession again and float over the final score of match from an acute angle.

Next up eyes turn to the Ulster championship and Cavan champions Mullahoran - hopefully the season has a few more weeks to run.