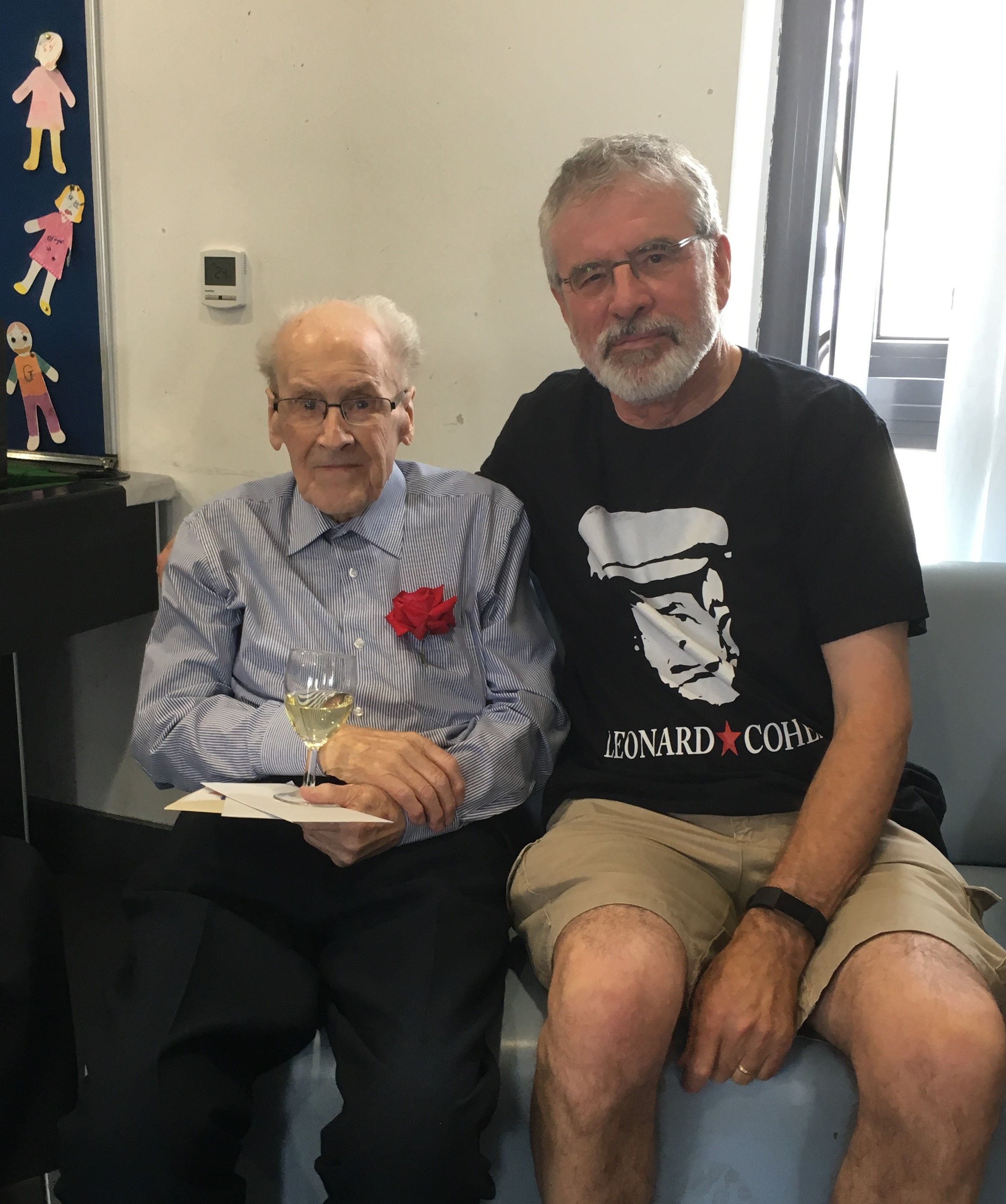 FATHER Joe McVeigh was a close friend and colleague of Des Wilson. It wasn’t just that both were priests. They both shared a passionate belief in justice and were committed to standing up for the rights of citizens against a British state apparatus which was oppressive and violent.

Fr Des died on the November 5, 2019, aged 94. He lived a full life. A good life. And in the course of his years of service he helped thousands of people. During the dark years of war and violence he lived and worked in Ballymurphy and Springhill. With Joe McVeigh, Fr Des established the Community for Social Justice. Its role was to highlight the real nature of violence in Ireland and to challenge the leaders of the Church. Fr Des believed that the Church had a moral responsibility to stand against injustice and repression.

As a tribute to his friend Fr Joe has just published a thoughtful tribute: Des Wilson – A Voice for the Poor and Oppressed. It tells the story of Des, his early life, his work as a priest in St John’s parish and then in Ballymurphy and Springhill, and then the setting up of Springhill Community House. I am honoured to have written the Foreword. Fr Joe says of Springhill Community House: “Des had a deep love and respect for the people in the Ballymurphy/Springhill community in which he lived. He always had time for a conversation and a cuppa tea. The door was always open. There was always a céad mile failte.

"Conversations at lunch in Springhill were a lively and interesting experience. Springhill Community House became ‘a house of hospitality’ somewhat like the Catholic worker houses in America which had been set up by Dorothy Day and Peter Maurin in the 1940s and 1950s, and indeed somewhat like the Celtic monasteries in years gone by.”

Fr Des was deeply affected by the killing of his colleague Father Hugh Mullan and ten local people by the British army’s Parachute Regiment in August 1971 during internment. The Ballymurphy Massacre left families and a community devastated and Des was always there supporting their efforts for truth.

For over 40 years Fr Des was at the heart of many of the positive initiatives to emerge from West Belfast, including Springhill Community House, Conway Mill and the peace process. He was a leader, a man of great courage and vision, a good neighbour, an honest, down-to-earth decent human being and a priest.

Joe McVeigh’s account of his life is evidence of a man who lived a long and full life and whose contribution to community politics, to education, and to peace in Ireland is immeasurable. It includes an acknowledgement of all those who worked with Des, including Noelle Ryan and Elsie Best. I want to commend Fr Joe for writing this account of Des’s life. If you are interested in buying a copy of Fr Joe’s book it is available now online, price £5 plus £1.50 for postage.

It will be in all good bookshops after the lockdown, including An Fhuiseog, 55 Falls Road.

How Mandela and his comrades paid tribute to Bobby Sands

LAST week I had the great pleasure to watch the online celebration by the ANC of its 109th birthday. An odd number you might think to celebrate a birthday. However, 30 years ago the ANC leadership was able for the first time in 30 years to publicly mark its 79th birthday following the unbanning of the party by the apartheid South African government.

The ANC faces many challenges. Its  online celebration last Friday included  a very good, positive  and honest speech by President Cyril Ramaphosa. There was also archive film footage of the historic press conference from 30 years ago – January 1991. The then ANC President Oliver Tambo – who had just returned home from 30 years of exile; Deputy President Nelson Mandela, who had been freed the year before after 27 years in prison; and Walter Sisulu, who had spent 26 years imprisoned on Robben Island, all spoke of their hopes for the future and their determination to achieve a free South Africa.

As I watched the five-minute video of these three giants of the South African liberation struggle I was reminded of all that has happened in that country and of the four years of difficult and dangerous negotiations that lay ahead of them. An agreement was finally achieved and in 1994 Mandela was elected as President of a free South Africa. But as the three spoke in January 1991 the outcome of the negotiations was uncertain. The political and personal risks they were taking were enormous. Violence was still widespread. Thousands were still in prison. And there was significant opposition within the apartheid system to any negotiated settlement.

The year after the 1994 election I and other Irish republicans had the honour and pleasure to meet Nelson Mandela and Walter Sisulu. In June 1995 I travelled to South Africa as part of a Sinn Féin delegation to meet with the ANC’s senior negotiators. Our objective was to talk to them about their strategies and tactics and to see what Sinn Féin could learn from their experience for our peace efforts.

The IRA cessation was then ten months old and the British were stalling on establishing all-party talks. By the end of our visit we had made many new friends, confounded the British who had tried to block a meeting with President Mandela, and were pleased to discover that our peace strategy was already following the pattern of that used by the ANC.

On our first day in the country we were taken to have lunch with the ANC’s National Executive at their party headquarters in Johannesburg. To our great surprise and honour Walter Sisulu, the grand old man of African resistance who had retired from his ANC positions after the 1994 election (he was then aged 82), made a special point of coming to the lunch. The room was packed and all of us sat riveted to Walter Sisulu’s description of his 26 years in prison and his memory of the deep respect and solidarity ANC prisoners had for Bobby Sands and his nine comrades who died on hunger strike 40 years ago this year in the H-Blocks.

Comrade Sisulu told us about hearing of Bobby’s death. He described the silent tribute ANC prisoners across South Africa paid to a fellow freedom fighter. Most of our delegation was in tears by the time he was finished. Speaking to him privately later, Walter told us that ANC prisoners marked and commemorated each of the hunger strikers who died. Mandela too spoke of the hunger strikers when we met him. On the wall calendar in his cell on Robben island on May 5, 1981, a simple single line is written: ‘IRA martyr Bobby Sands dies.’

Afterwards I presented Walter Sisulu with a wooden Celtic cross carved by the republican prisoners in Long Kesh. It was one of several gifts made by the prisoners that we had brought with us, some of which were damaged when the British opened our baggage in Heathrow Airport. An ANC former prisoner helped repair them. Later another ANC activist who had spent 15 years on Robben Island was to tell us that from that point on ANC prisoners rarely spoke of ‘a hunger strike’.

When discussing whether a hunger strike should be employed in any given situation the political prisoners referred to it as ‘a Bobby Sands’.

This year we in Ireland will mark 40 years from the 1981 hunger strike. It is important that like Nelson Mandela and Walter Sisulu we remember and honour those who courageously gave their lives for their comrades and whose extraordinary valour set an example for people in struggle around the world.


A week of high drama in Washington DC

THE political and constitutional fallout in the USA after the unparalleled events last week in Washington will continue for years to come.

I have visited the Capitol Building many times since my first visit to Washington DC in September 1994. I know well many of those Congressional and Senate representatives and their staffers who have regularly met with me to discuss Ireland. Consequently, my thoughts last Wednesday, as I watched the disturbing scenes in the Capitol Building unfold, were primarily for the women and men who work there and who have worked closely with us in promoting peace and unity in Ireland.

In recent decades Sinn Féin has developed a strong connection with those on Capitol Hill who are Democrats or Republicans or neither. Sinn Féin does not involve itself in the internal affairs of the USA, although I and others have rightly criticised some of President Trump’s remarks and we have consistently raised concerns about US foreign policy. But our main mission is to promote Ireland’s interests and we long ago understood the importance of encouraging successive US administrations to have a progressive foreign policy position on Ireland. We have worked closely with Irish America to make that happen.

I want to extend best wishes to all our friends on Capitol Hill. I would also like to thank some of those Congressional members who will no longer be on the Hill and who were steadfast in their support for the peace process. Eliot Engel, Peter King and Joe Kennedy are moving on. Thank you for your work.

Finally, comhghairdheas to Boston Mayor Marty Walsh who has been appointed to President Biden’s cabinet as Secretary of Labor. In a video message in November to the opening ceremony of the 2020 Golden Bridges Conference linking Northwest Ireland and Irish America, Marty Walsh said: “Under the leadership of President-elect Biden, the United States is ready to move forward and to once again live up to our highest ideals. And we are committed to supporting peace and unity in Ireland, too.”

I have every confidence that the Biden administration and the new Congress and Senate will build on the positive work of recent years. I wish them well.