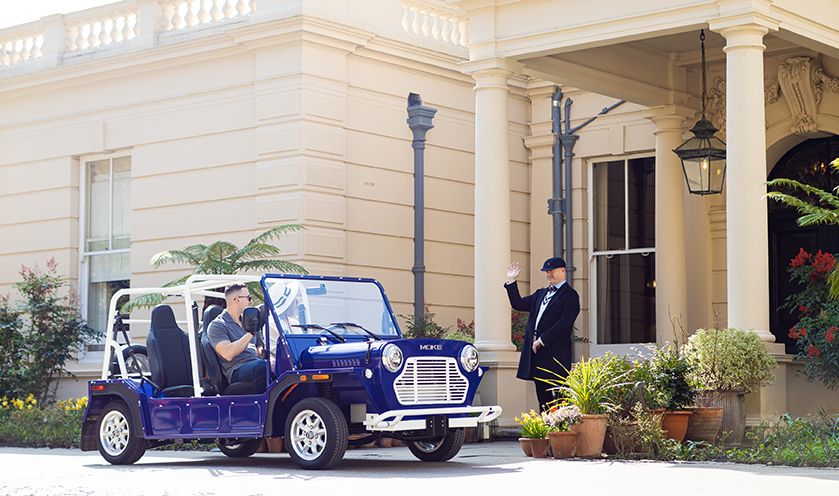 RECENTLY we reported that the iconic Mini Moke was back in production and on sale here. Last week the first all-Electric Moke rolled off the production line ready to be delivered to customers in time for summer.

Moke is all about country roads, beach excursions, the summer breeze in your hair and enjoying the journey, rather than hurrying from A to B. The original Mini Moke, created by Sir Alec Issigonis (designer of the classic Mini), has been reimagined not only for today’s world, but has been future-proofed as a fully electric vehicle. In recent times, petrol-powered Mokes have been championed by everyone from actress Kate Moss to F1 driver George Russell.

The team behind Moke has been working relentlessly for three years to engineer and manufacture a worthy, sustainable successor equipped with the latest technologies, and now the electric Moke is ready to inspire and delight a new generation. Customers will receive their new cars from June, heralding a highly-anticipated return to the road for this much-loved motoring icon.

The fully electric powertrain offers enhanced performance and effortless driveability, free of noise and air pollution. With a typical range of around 75 miles, the Moke is eminently suitable for days at the beach, country picnics and other summer activities. A rapid charge time of just four hours (from a mains charger) ensures it’s always ready for the next adventure. The Electric Moke’s fun-loving character is reflected in the colour palette: Wave Blue, Sunlight Yellow, Sunset Orange, Scuba Blue and Granite Grey are all offered on the standard model.

Customers will also be able to personalise their car to their exact tastes and sensibilities. Prices for the electric car start at £35,000.


IT has been a while since Alfa Romeo introduced new sporty models into the range, but they have just launched the new Giulia and Stelvio Estrema.

Estrema offers a top of the range specification with a combination of technical refinement and sporting luxury. Targeted specifically at driving purists, the Estrema is fitted with Synaptic Dynamic Control suspension and a limited slip diff as standard, both of which help to provide comfort without compromising on handling or driving pleasure. The limited slip diff provides stability and control in all grip conditions, distributing the power to where it’s needed when exiting corners at high speeds and during acceleration.

Both inside and out, carbon fibre and dark painted elements define the sporty look of this new car.  The exterior features carbon fibre mirror caps and front grille, dark tone badging and five-hole, dark-painted 19-inch alloy wheels on the Giulia, with 21-inch on the Stelvio. They are available in a choice of four exterior colours: Alfa red, Alfa white, Vulcano black and Misano blue. The same sporty look and feel can be found on the interior too, where carbon fibre highlights the cabin, along with Alcantara and leather seats with red stitching.

The red stitching extends to the dashboard, steering wheel, and gear knob, enhancing the sporty look.  A 14-speaker Harman Kardon audio system completes the standard specification. The Giulia and the Stelvio Estrema are equipped with the 2.0-litre turbo 280hp petrol engine, while a 2.2-litre turbo diesel 210hp engine is also available on the Stelvio. The diesel-engined version is paired with an eight-speed automatic transmission.


SERGIO Pérez won the Monaco Grand Prix for Red Bull in difficult wet-dry conditions beating Ferrari’s Carlos Sainz, as Max Verstappen finished in third place in the Red Bull to extend his title lead over Charles Leclerc who took the flag in fourth after Ferrari lost a strategic pitstop battle with Red Bull.

With heavy rain falling ahead of the scheduled start, race control delayed the race by more than an hour. And when the race finally got under way it did so on a wet track behind the safety car. Leclerc slithered into a cautious lead ahead of Sainz, Pérez and Verstappen and while the opening laps were nervous, the rain eventually began to recede.

With Sainz running slightly slower than his team-mate, Leclerc was able to build a gap at the front and after 12 laps the lead Ferrari was more than five seconds clear of the Spaniard with Pérez seven seconds further back and Verstappen 1.3 behind him. Pérez was the first of the leaders to change tyres, going on to intermediates. One lap later Leclerc pitted, also taking intermediate tyres, he was joined in the pit lane by Verstappen who made the same switch. Sainz, though, moved directly to slick tyres at the end of lap 20 and Ferrari gave Leclerc the order to do the same. But at the last moment the Italian team’s engineers changed their minds and Leclerc was told to stay out. It was too late, however, as the Monagasque driver was already in the pit lane. He was switched to slicks and released.

The slicks proved difficult to get up to temperature and as Sainz and Leclerc struggled for pace, the Red Bulls drew away at the front, pitting again. this time for slicks, and Pérez and Verstappen emerged in first and third respectively. Behind the top four, Mercedes’ George Russell was now in fifth place outracing his illustrious teammate Lewis Hamilton yet again. Lando Norris was sixth in a McLaren, Alpine’s Fernando Alonso seventh and Hamilton in eighth.

On lap 27, Mick Schumacher lost control of his Haas and hit the wall in the Swimming Pool section, tearing his car literally in half. He emerged from the wreck unhurt, but it brought out a red flag. The race resumed with another rolling start and when the safety car left the track, Pérez held his lead ahead of Sainz, with Verstappen still third ahead of Leclerc.

Things got very exciting as the top four closed up in the later laps, but that was the way it ended after only 64 of the planned 77. The race clock called an early chequered flag due to all the delays. Valtteri Bottas was ninth in the Alfa Romeo and Sebastian Vettel in tenth in the Aston Martin rounded out the top ten. Verstappen’s third place extends his championship lead over fourth-placed Leclerc by a further three points. On 125 points the Dutchman is now nine clear of Leclerc while Pérez is third on 110 points.

In the British Touring Car Championship, Portadown driver Colin Turkington in his BMW made great strides towards the top of the table with two fourths and a second at Thruxton Raceway last Sunday. The big winner, though, was Honda’s Josh Cook with two wins and a fifth. The big loser, Tom Ingram, he led the championship in his Toyota coming into Thruxton, but no points in the first race followed by two eighth places dropped him from first to fourth.