Agreement is reached to end the black taxi strike 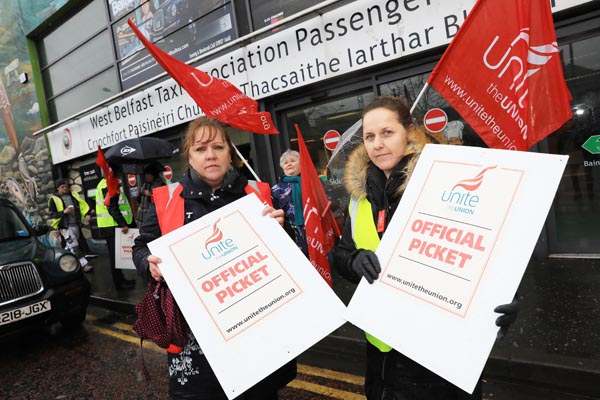 CONCLUSION: Breige Brownlee and Seaneen Burns with supporters – the strike is now over

SEVEN weeks of strike action by West Belfast black taxi staff has come to an end, the Andersonstown News has learned.

Administrative staff members Breige Brownlee and Seaneen Burns, who between them had 43 years combined service at the King Street depot, are no longer employees but it is understood a mutually satisfactory outcome was reached between the former staff and the management of Belfast Taxis Community Interest Company (CIC).

However, it’s our understanding that all parties are bound by a confidentiality agreement, which also extends to the women’s trade union, Unite the Union.

Both Breige and Seaneen took to the picket line along with members from Unite the Union, People Before Profit’s Gerry Carroll and Sinn Féin representative Robert McClenaghan and Councillor Mary McConville calling for fair remuneration for the women. Speaking to the Belfast Media Group at the time, Breige said that the decision was not taken lightly to strike.

“You have to be treated with respect and dignity, you have to be given your fair dues, that is all we have asked for her.

“This (strike action) is a culmination of three and a half years of asking for a pay rise, which has now come to strike action. We don’t want to be out here, we want to be at our desks doing our work,” she said.

Breige said that both she and Seaneen had had a number of meetings with the Labour Relations Agency and the black taxi board. In their response the board of the black taxis said they were committed to “finding an amicable solution” to the ongoing wage dispute.