All smiles as Frampton and Santa Cruz prepare to resume hostilities 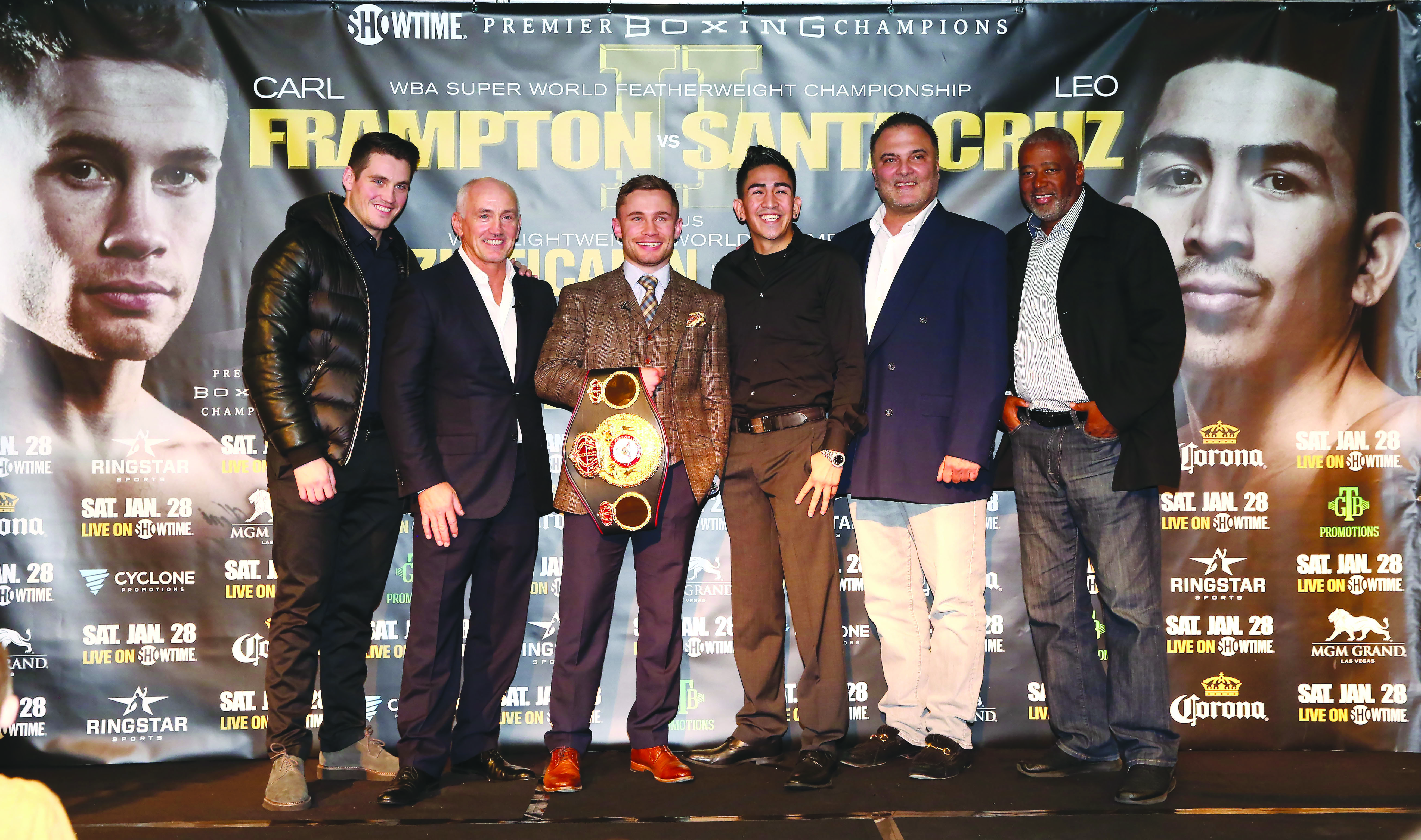 IT was all smiles and selfies at the Europa Hotel on Tuesday as Carl Frampton welcomed Leo Santa Cruz – the man he relieved of the WBA featherweight title in July – to Belfast for the first part of a two-leg media tour to promote the rematch between the pair on January 28 at the MGM Grand Garden Arena in Las Vegas.

Los Angeles will be the venue when the pair face the American press today (Thursday) and while the numbers are sure to be big, perhaps there will be less by the way of fans who now flood these Belfast press events for ‘The Jackal’.

The last time a major press conference involving the North Belfast man took place in the city was around 12 months to promote his super-bantamweight unification bout with Scott Quigg. That was a hostile occasion with Quigg’s promoter, Eddie Hearn and trainer, Joe Gallagher cast in the role of the pantomime villains, but this time the respect between Frampton and Santa Cruz was mirrored in the polite applause for the affable Mexican-American who was mobbed for autographs and selfies as soon as he entered the room.

Indeed, it wasn’t just the Belfast public who wanted a photo with ‘El Terremoto’ as Frampton invited his rival for a selfie together with the packed out room including approximately 400 fans in the background.

The respect between the pair was there for all to see before, during and after their epic 12-round battle at the Barclays Centre back in July when Frampton handed Santa Cruz his first professional loss and in the process, became a two-weight champion thanks to a majority decision verdict.

Sometimes with a rematch, the familiarity can start to breed contempt, but it is unlikely that will be the case until the bell sounds for round 13 of this duel on January 28 and Santa Cruz was appreciative of the reception he got on his first visit to the city.

“I thank you for the great reception,” said the 28 year-old who was flanked by Sam Watson, right-hand man to Al Haymon and Richard Schaefer whose Ringstar Sports will co-promote the fight with Cyclone Promotions.

“I’m very happy to be here, I’m excited. The first fight was a great fight and the second is going to be even better.

“I tasted my first defeat against a great fighter and I just want to win that rematch. If I get the win then we can have a third fight and I can come here to Belfast for the third fight. Hopefully it will go my way on the night.”

Perhaps Santa Cruz was won over by the reception of the Belfast public given his offer to return to the city for a third meeting with Frampton should it go his way this time.

The Tigers Bay man was appreciative his rival made the long trip over although he is adamant there will be no need for a third meeting and is fully confident he will win in an even more clinical style this time around.

“It’s great for Leo Santa Cruz to be here and for the people of Belfast to see a three-weight world champion in the flesh,” said Frampton who will fly out to Vegas on January 2 where he will stay and train at a house owned by boxer, Robert Guerrero as-well-as train at Shawn Porter’s gym in the final weeks of camp.

“This could be even better because I gave him his first loss and he will be looking for revenge, but I’m training very hard and I believe that if I use my brain more this time and don’t get dragged into a fight, I can win it more convincingly.

“There will be times in this fight where I will have to bite down on my gumshield and fight like you-know-what, but that’s what I’m prepared to do.

“I’m determined to come back with this title and we will have a show in Belfast in the summer I promise.”

Tickets for the fight went on sale on Tuesday at www.AXS.com (contact Cyclone Promotions for VIP packages) with Frampton expecting around 4,000 fans to make the trip, so the MGM Grand will feel like a little corner of Belfast on the night despite Santa Cruz’s home in Los Angeles being much closer to Sin City than ‘T-Bay’.

Santa Cruz suggested the partisan, pro-Frampton crowd in their first meeting in New York may have helped swing some of the closer rounds the Belfast man’s way although he acknowledges it was a close fight. Prior to that Brooklyn blockbuster, the Mexican’s preparations were far from ideal with his father and trainer, Jose being diagnosed with cancer although thankfully he is recovering well and back in gym to help prepare his three-weight champion son for this rematch.

“I don’t want to make any excuses, but I didn’t have a great camp with my dad going through cancer,” offered Santa Cruz.

“I wasn’t training as much as I was thinking about my dad going through cancer and treatment. My dad wasn’t in training camp for a month and a half, so it was only in the last three weeks of camp he came back in.

“This time we are going to come with a great game-plan, I’ll be training 100 per cent and my dad will be in the camp. We are going to go a lot better. I know it will be another tough, close fight but we are hoping to get the victory.”

Frampton acknowledged the difficult build-up his rival had prior to their first meeting but dismisses the notion Santa Cruz can turn up on January 28 with the ability to be even busier in the ring.

“He was going through a difficult time with his father’s illness,” he acknowledged.

“No doubt he will be training hard, but he threw over 1000 punches in the last fight.

“He was very fit and was punching right to the end, but I don’t think he can improve his work-rate. He will probably have a different game-plan, but whatever he comes up with I genuinely believe I know how he fights and I’m ready to deal with that.

“The plan is to win first and foremost – I know it is going to be very difficult – but I believe I will.”

The 29 year-old has enjoyed some massive nights already in his career including that Quigg unification in Manchester, the first win over Santa Cruz in New York and that night at Titanic Slipways when a purpose-built arena was required when he won his first world title against Kiko Martinez. But of course this is different, travelling to the modern day Mecca of boxing and performing in the same ring as major names such as Mayweather, Pacquiao, De La Hoya and Tyson.

“This is huge,” agreed the defending champion.

“The support back home has always been amazing. Even when I boxed Jeremy Parodi at the Odyssey, the atmosphere was incredible. But to be topping the bill at the MGM in Las Vegas against a great fighter is a dream come true and these are the ones you will remember for a long, long time.

“Leo has been lucky enough to get to fight there before, so I’m just excited to get out there and feeling the buzz on fight week.”

The buzz has probably already begun for this rematch that promises to deliver once again. The smiles and compliments are likely to continue between Frampton and Santa Cruz in the build-up, but scratch the surface and there is a burning desire within both men to become the King of Vegas on January 28.