Antrim and Down set to battle for right to face Dublin 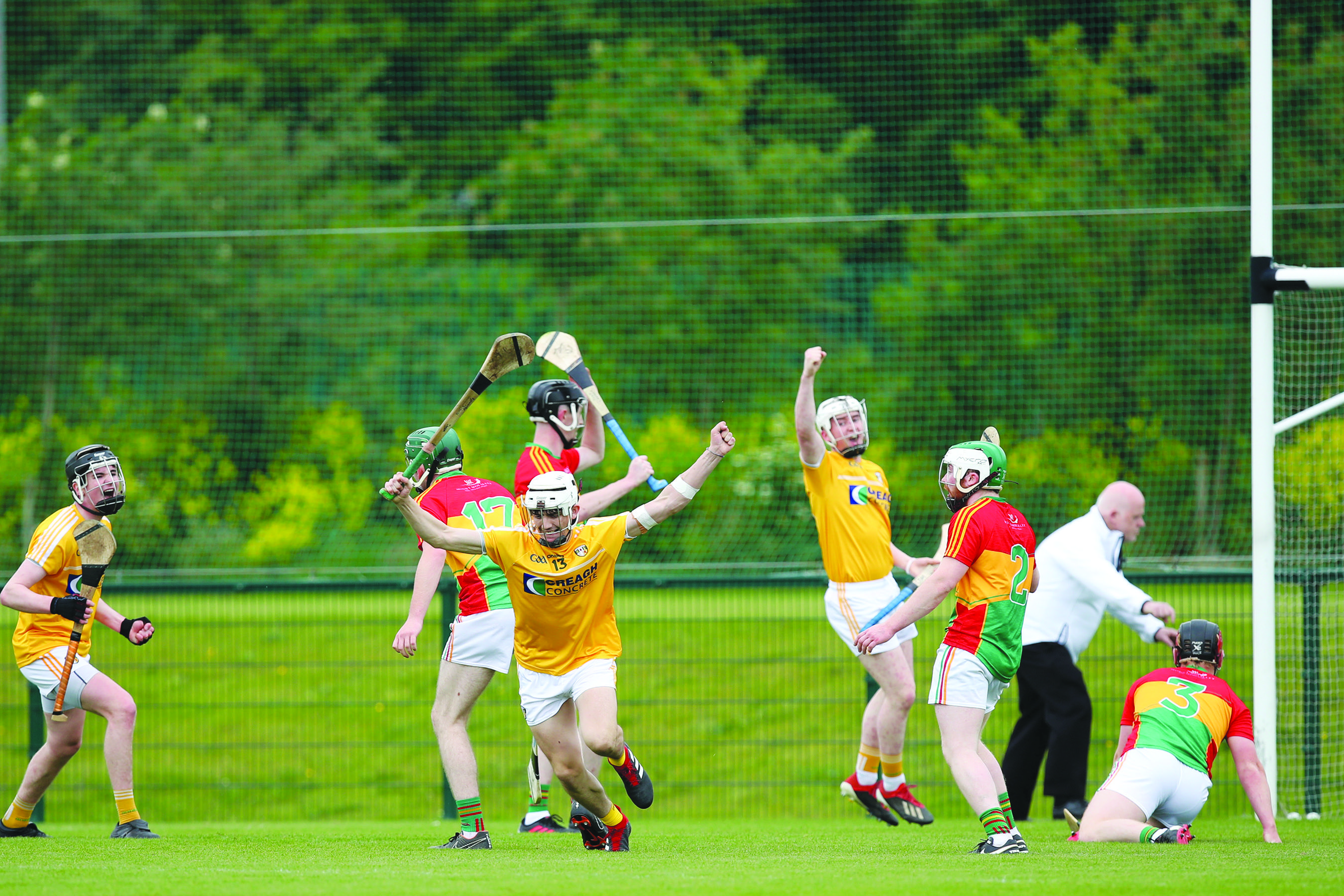 Despite playing well, Antrim ultimately lost out to Carlow in last year’s Leinster U20 Championship after extra-time

ANTRIM U20 hurling manager Karl McKeegan has called on the GAA to look into the possibility of introducing a league for the grade ahead of Saturday’s play-off clash with Down at Ballycran.

The Ulster sides will lock horns for the right to progress to the Leinster Championship and a meeting with Dublin next Wednesday night in Darver.

However, McKeegan believes it is unfair for a squad to be assembled with prospect of only playing two games in season.

The U20 footballers play a mini-league as part of their preparations for the Championship and McKeegan feels the hurlers need more competitive games if they are to progress to play at senior inter-county level.

“There has to be something put in place - these boys might only have two matches, one game in Ulster and one Leinster if they get beat,” said McKeegan.

“You're asking boys to come and train two nights a week and possibly only play two matches. How can you ask boys to commit to that?

“It is a farce. I think they need to look into that age group. The Under 20s are in limbo. They are coming out of minors and some of them aren’t breaking through to their senior clubs teams yet.

“They could maybe bring in a league and run it off as a robin-robin like the Joe McDonagh.

“I don't know whether it would be better played before the club start or after. With the times we are in it is hard to plan anything, but it is something that has to be looked at going forward.”

The Ulster Qualifier had originally been scheduled to take place on Saturday, March 21 and McKeegan said the squad was in rude health before the Covid-19 pandemic brought a halt to GAA fixtures across Ireland.

Some competitions, like the provincial and All-Ireland Club Championships, were cancelled and there were fears in the Antrim camp that the U20 games would bite the dust as well.

Yet, the fragility of fixtures in the current climate was highlighted by an outbreak within the Antrim U20 squad which forced them to down tools for a three-week period. Thankfully, McKeegan reports a clean bill of health ahead of Saturday’s meeting with Down.

“We were wondering was it on or was it off and you had players asking, but you just couldn't give them an answer,” stated McKeegan.

“It was nobody's fault but nobody was making a decision. Once we were told it was going ahead we got them all together and we had three good sessions. Unfortunately, Covid kicked in and a couple of the boys tested positive. We had to stop for nearly three weeks.

“We got back together on Sunday so we had two sessions in four week which isn’t ideal. We had started with them back in February had a few sessions. We got a great response from the players.

“At this age group you're just never sure, but we had a few good sessions before the game was cancelled (in March). We knew we had a good panel and the boys are mad keen. I knew you if we got the chance to get back together they would jump at the chance.”

Had the game gone ahead as planned last March, one player who wouldn’t have featured for Antrim is Conall Bohill.

The St John’s ace suffered a broken hand while playing for Queen’s in the McGurk Cup at the beginning of the season, but returned to action as the Johnnies were pipped by Loughgiel after extra-time in a thrilling Antrim SHC semi-final.

“Conal Bohill has only turned 19 and he has another year of U20 left,” said McKeegan.

“I think he was one of the outstanding players of the Championship this year.

“I've got two great coaches in with me and Johnny McIntosh and Brian McFall and we're trying to help these young boys in them to the next level. Working with boys like that does your heart good.”

Bohill is one of only a handful of survivors from last year’s U20 panel.

Antrim defeated Down in Ulster before losing out to Carlow after extra-time in Abbotstown. A goal from Seaan Elliott, who finished with 2-11, brought the game to extra-time, but the Barrowsiders claimed a narrow 0-25 to 2-16 win.

Elliott is also back in action for the U20s along with the likes of Ryan McGarry, Oisin Donnelly and Declan McCloskey.

Rossa’s Dominic McEnhill, who is part of the Antrim Senior Football panel, will also travel with the U20 squad in what is a huge boost for McKeegan’s men.

The Antrim boss feels they are in a better position going into the Championship than they were last year.

“Last year was a disaster - we just couldn't get players,” added the Cushendall native.

“Last year I think we might have had two or three sessions. We had a good panel, but we just couldn't get them together between clubs and universities.

“We hurled really well against Down and we played some really good stuff against Carlow, but we just ran out of steam.

“When I look back, I wish we had have been able to put more into it and that’s why we said we’d have to do better this year. We got them going earlier this season and we were going well until Covid kicked in.”

Down’s prospects of causing an upset have been hindered by the re-scheduling of the Allianz Hurling League Division 2B final.

Ronan Sheehan will take charge of the U20s on Saturday trying to overcome Derry in Sunday’s league final in Armagh (2pm).

However, senior players Ronan Costello (Bredagh) and Phelim Savage won’t feature in the U20 game.