Antrim management duo keen to remain in charge for next year 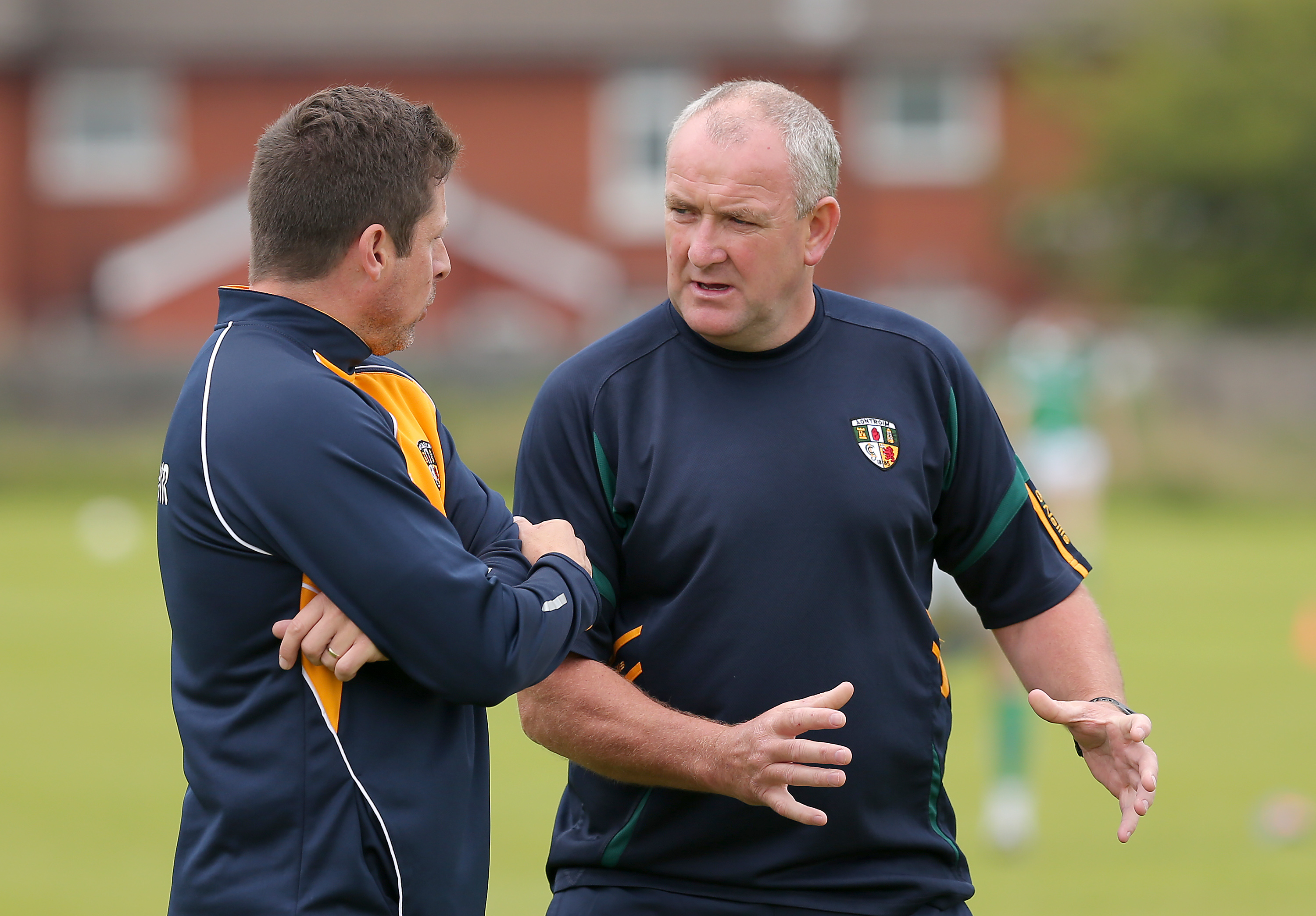 ANTRIM’s management duo of Frank Fitzsimons and Gearoid Adams are hopeful of remaining in place for next season despite the Saffrons crashing out of the Championship with a Round 1B Qualifier defeat to Limerick on Saturday.

The Treatymen claimed a three-point win in Corrigan Park thanks largely to a penalty from Sean McSweeney and a goal from Ian Ryan inside the opening eight minutes.
The loss comes six weeks after Fermanagh ended Antrim’s interest in the Ulster Senior Football Championship with a 1-12 to 0-9 win in Brewster Park.

Last year’s surprise Qualifier win over Laois was the only win in five Championship outings in two years but Fitzsimons, who enlisted Adams as his co-manager for 2016, wants to remain in the Antrim hot seat for at least another campaign.

“People will knock us but that’s water off a duck’s back,” said Fitzsimons.
“We came out of Division Four. It is what we do next season in Division Three that counts.

“Definitely, as far as we are concerned, we want to be there next year.
“We haven’t heard any of the players saying any different. We have a good relationship with the players.

“You are always going to have people standing along the sideline having pot-shots at you.
“I think we have improved. This is my second year and Gearoid’s first.

“There has been a lot of hard work put it.
“We won six on the bounce in the league. You just don’t do that off the cuff.
“We just didn’t play to our potential in those three games and that is the most frustrating thing.”

The three games Fitzsimons referred to was their last three competitive outings.
After winning six games in Division Four to secure promotion, Antrim lost out to Louth in the Division Four final in April before the Championship defeats to Fermanagh and Limerick.

Saturday’s loss was, arguably, the most disappointing defeat of the three.

The Munster side will compete in Division Four after failing to win a game in Division Three this season and bowed out of their provincial Championship with a three-point defeat to Clare.
However, Fitzsimons insisted that Limerick were full value for their victory on Saturday afternoon.

“We are still gutted about it. We were very poor in front of the posts,” reflected Fitzsimons.
“People talk about playing too defensive but we were caught one-versus-one for their first goal.

“Nobody went out to make mistakes deliberately or play badly or kick wides.
“To be fair, they started very well. They set-up very defensively and they had 13 men behind the ball at times. I am not knocking that – it is the way the game is going.

“We were very unlucky at times as well. Ryan Murray was through one-on-one at one stage and their goalkeeper made a very good save.
“You hear it over and over again – goals win games. They scored two and it is hard to come back from that.

“Every time we seemed to get going, they turned us over. They played very well. I can take nothing from Limerick, they played well to beat us.”

Antrim’s prospects for the game suffered a huge blow when it emerged that leading scorer Tomás McCann was unfit to start due to a hamstring strain.
The Cargin ace was introduced midway through the second half and scored a point and set up Ryan Murray for another but Fitzsimons lamented Antrim’s miserable luck with injuries this season.

Niall McKeever was ruled out of the Fermanagh game after picking up a hamstring injury while his Portglenone teammate Niall Delargy also missed Saturday’s clash with Limerick.

“It started on Tuesday night when Niall Delargy had to go for an x-ray. He damaged his lung so that ruled him out,” added the Antrim boss.
“On Thursday night, Tomás had a hamstring strain which ruled him out of starting. He came on and played very well. He has been our top scorer this year.

“We have a good panel but Tomás is a class act. That was a big loss for us and so was young Niall.”
Fitzsimons also hopes to have a largely unaltered panel next year and doesn’t envisage any retirements in the wake of Antrim’s Championship exit.