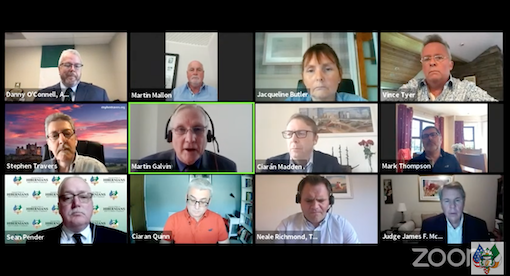 Victims of state violence and collusion appealed for help from the Irish America in the face of a proposed amnesty for Troubles killings during a live webinar yesterday (Saturday).

The Ancient Order of Hibernians in America hosted victims' relatives and survivors at the online forum in wake of the Brandon Lewis proposal to block criminal and civil actions — as well as inquests — related to 'Troubles' killings.

Among those taking part were Jacqueline Butler, daughter of Springhill Massacre victim Paul Butler, Steven Travers a survivor of the Miami Showband Massacre, and Martin Mallon, whose aunt Roseann Mallon was one of 17 collusion murder victims killed with the same weapons.

“These speakers are appealing to America and the AOH, because they believe that American pressure can stop Britain from closing down their chances for justice and the truth," he said.

Prominent politicians and members of Irish-American organizations, including the Irish American Unity Conference, Brehons, Irish Northern Aid and Ladies Ancient Order of Hibernians took part in the webinar which was watched by almost 300 activists across the US.

AOH US President said the refusal of the British to honour agreements on legacy issues beggared belief.