Arlene Foster has ‘conflict of interest’ over RHI – Adams 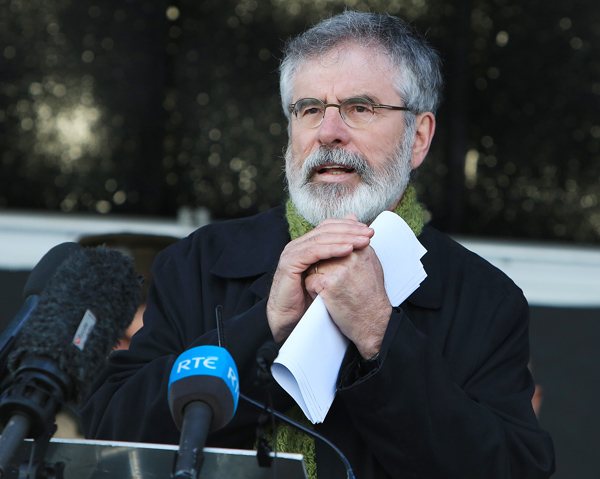 SINN Féin president Gerry Adams has reiterated his call for First Minister Arlene Foster to stand aside saying she has a ‘clear conflict of interest’ in the RHI scandal.

Speaking at a commemoration to Seán Sabhat in Limerick to mark the 60th anniversary of his death, Mr Adams said Sinn Féin wouldn’t compromise on their demand for Arlene Foster to step aside.

She has, however, said she will not give in to Sinn Féin’s demands for a “scalp”.

“There is a worsening crisis in the political institutions surrounding the Renewable Heat Incentive and serious allegations of corruption, fraud and incompetence associated with the scheme. Arlene Foster insists she will not step aside. This is unacceptable,” said Mr Adams.

“The DUP leader has a clear conflict of interest. She was the Minister responsible for the RHI scheme from its inception. Mrs Foster also oversaw its operation for almost three years as Minister for Enterprise, Trade, and Investment.

“She approved the RHI scheme without cost controls and took the decision to strip these controls out of the scheme.

“Her Department had been warned a year before the scheme was set up by energy companies and by the Ulster Farmers Union that there was a need for cost controls and caps on payments.

“These warnings were ignored, as were a series of warnings from whistle blowers and others about the operation of the scheme and the potential for abuse, corruption, and fraud.

“The failure to act on these warnings and the stripping out of cost controls has led to the largest potential loss to the taxpayer of any government scheme in the history of the northern state.

“There have also been allegations from a former DUP minister that DUP Special Advisers delayed the ending of the scheme, when there was a spike in applications which almost doubled the cost of the RHI scandal.

“So, Sinn Féin’s demand for Arlene Foster to step aside without prejudice pending a preliminary report from an independent investigation into the RHI scandal is a reasonable request.”