WATCH: Unique insight into the world of mating barn owls 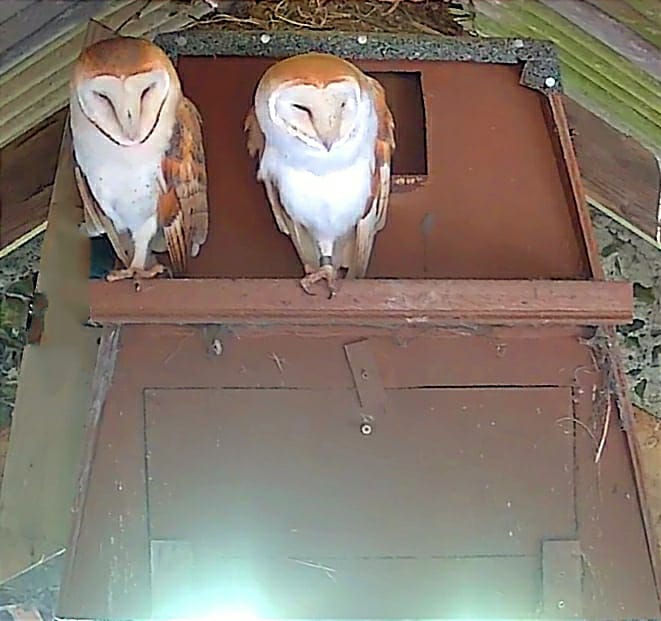 TOGETHER: The local mating pair of barn owls

A LOCAL ornithologist has released a fascinating series of images of a mating barn owl pair.

The protected birds have taken up in one of a number of nest boxes installed by Crumlin man Ciarán Walsh and his friends Paul Toner, Noel McKernan and Pete Crossett at an undisclosed barn in County Antrim.

The group have installed specialist cameras at several nests, picking up footage of the owls.

I was sneakily hoping she'd lay a 7th egg during the night but looks like she's all done laying at six eggs. What a privilege it has been to see inside the home of this pair of barn owls and watch the eggs being laid. Now for the hatching, will they all hatch! pic.twitter.com/ul6vD3zabY

With five eggs laid and another likely on the way, followers of Ciarán's Twitter account (@AntrimLens) can keep up to date with the survival prospects of these captivating creatures.

"This is a site I have worked on for probably eight to nine years," Ciarán said.

"It's an ideal site for barn owls but the only problem with it was that there was nowhere for them to nest in. The first thing we did was build a couple of nest boxed and we put them up.

"I carried out the routine of putting out feed for the mice along the hedgerow and day old chicks for the adult birds when they arrive. I've been doing that for a couple of years.

"Last year the owls came and started to breed. That was the first in the eight years, but someone went in and disturbed them."

Despite the setback, the barn owl male returned to the nest in December and the female arrived around April.

"They immediately went into breeding again and the eggs arrived just over a week ago now," Ciarán said.

"There has never been a camera inside a barn owl nest here in the North. This is the first camera inside the nest. Everything that we're seeing is brand new to us.

"Most of what we get is from across the water, and the nests over there would have eight or nine eggs in some places, but it's generally from four to seven. We're hoping for something similar. Not all the eggs will hatch, because some of them will be blanks and the male mightn't have fertilised every one. If she goes to six eggs I would be happy with three making it to fledging."

Not the easiest thing covering all 6 eggs. pic.twitter.com/n1nuMgWX2K

With eggs hatching at different times and a shortage of food, barn owl chicks can sometimes eat their younger siblings, thereby increasing the surviving bird's chance of survival.

As well as a look at the birds themselves, the nest cameras also offers information about the type of diet they survive on and a look at the wider ecology of the area.

"There's actually a lot of bank voles coming in and there's not meant to be bank voles up here," Ciarán explained.

He added: "It's a big deal and we're very happy with it – it's all part of the programme we've planned."