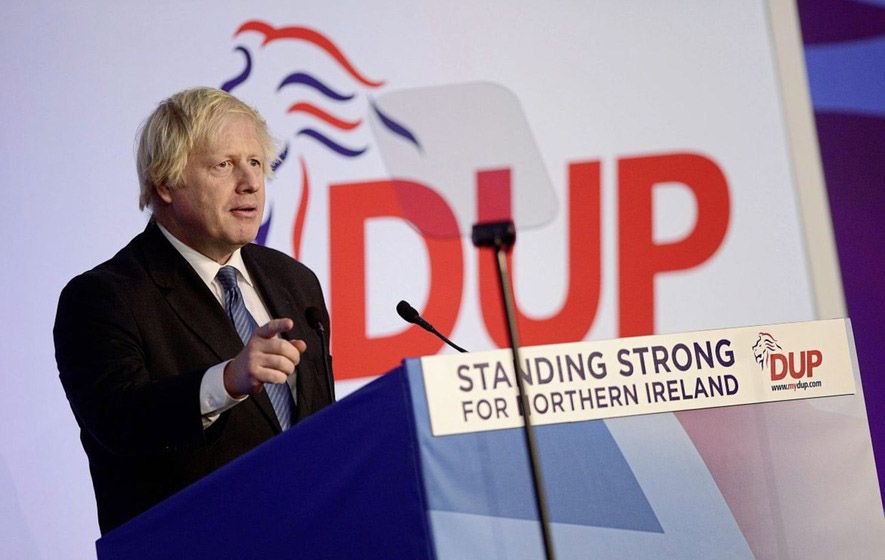 FAMILIAR TALE: The DUP embraced Boris Johnson over Theresa May but were badly betrayed by him

BRITISH policy is dictated by British interests. It has always been so. The fact that Prime Minister Boris Johnson has again betrayed unionists over Brexit should have come as no surprise to anyone with even the most rudimentary understanding of how British policy works.

The British Prime Minister Palmerston spelt it out most clearly almost 200 years ago when he said: “We (England) have no eternal allies, and we have no perpetual enemies. Our interests are eternal and perpetual, and those interests it is our duty to follow...” Irish republicans and others who have had first-hand experience of British duplicity have a name for it – Perfidious Albion.

The surprise is that so many unionists are surprised by the turn of recent events. Have they no memory of the twists and turns of Theresa May in her relationship with the DUP?  Do they not recall the many warnings given, including by this writer, that the deal reached between the DUP and Theresa May in the summer of 2017 would end in tears? The DUP thought they had it made. They believed that the confidence and supply arrangement which would see them keep May in power would ensure them enhanced influence at the heart of Westminster.

Less than a year later it was starting to fall apart. As the British negotiated the Withdrawal Agreement in October 2018 Arlene Foster warned: “There cannot be a border down the Irish Sea, a differential between Northern Ireland and the rest of the UK.  The red line is blood red.”

With the British and the EU close to a Withdrawal Agreement Theresa May employed the bureaucratic gobbledegook language of the Sir Humphrey Appleby character in Yes Minister and wrote to Arlene Foster talking about “specific alignment solutions in some scenarios’. Arlene Foster interpreted this as preparedness on the part of the British government to embrace “the idea of a border down the Irish Sea.” Foster wrote a letter back to Theresa May in which she said that the Prime Minister’s letter “raises alarm bells for those who value the integrity of our precious union”.

When the announcement of the Withdrawal Agreement was made some days later Sammy Wilson went into verbal overdrive. He described it as “a punishment beating for the UK because they dared to vote to leave the EU”.

When the announcement of the Withdrawal Agreement was made some days later Sammy Wilson went into verbal overdrive. He described it as “a punishment beating for the UK because they dared to vote to leave the EU”.

The DUP stopped voting with May. It even voted with Labour. The DUP turned its back on May and embraced Boris Johnson as the saviour of the union. Two months after Foster’s “blood red” comments Boris Johnson was given a rousing welcome at the DUP party conference in Belfast. He warned against the north being left behind as “an economic semi-colony of the EU”; attacked any suggestion of regulatory or customs checks between the north and Britain, describing them as “damaging the fabric of the Union”; called on the British government to “junk the backstop”; and in a bizarre reference to the Titanic warned against the EU being allowed to set the rules for the north. Johnson said: “The Titanic springs to mind and now is the time to point out the iceberg ahead.”

Two years later and the Johnson government has driven the ship smack into the iceberg and the DUP is facing mounting criticism as more and more people come to realise the failure of its strategy and the disastrous impact Brexit is going to have on the north’s economy and their lives. Under Johnson’s leadership all of the commitments he gave two years ago to the DUP have been abandoned. Worse, from their perspective, there will be a border down the Irish Sea, customs posts will exist in northern ports and airports checking goods coming from Britain and the north will remain within the EU single market.

One consequence of all of this is that the words “betrayed” and “betrayal” have again been dusted off by political commentators and unionist politicians. The former UUP press officer and commentator Alex Kane was scathing of Boris Johnson last week. He wrote that the “sheer scale of this betrayal is unprecedented”.

The trouble is it’s not. In March 1972 the British government scrapped the unionist regime at Stormont. In November 1985 they signed the Anglo Irish Agreement with Dublin. Hundreds of thousands marched in protest. Remember  ‘Never, Never, Never’? In December 1993 John Major signed the Downing Street Declaration with Albert Reynolds. In September 1997 the DUP walked away from the talks process because Sinn Fein joined it and they stayed outside the process until 2007.

But then unionist political leaders since the Home Rule Bills of the 19th century, and especially the DUP in the last 50 years, have frequently relied on claims that unionists are being sold out or betrayed to mobilise support in opposition to any meaningful reforms. This tactic facilitated the creation of paramilitary groups like the UDA, UVF and Ulster Resistance. Last week the Belfast News Letter wrote in an editorial: “The Prime Minister will always do what is right for him personally, then for his party, and then for England.” That same comment is true for every British Prime Minister.

Remember the old adage:  ‘Fool me once shame on you – fool me twice shame on me’? How should it go if you have been fooled so often and so shamelessly over so many decades? DUP-ed again?

So, if you are a unionist and are fed up with British politicians and unionist politicians playing you for a fool and betraying and using you in their own interests, consider a different future – a different approach.

Consider engaging in the growing conversation about a new Ireland – a shared Ireland – in which new constitutional arrangements will protect and promote your interests. Remember, for Boris Johnson and others like him there is no precious union, there are just eternal and perpetual English interests.

BREXIT is the outworking of a Little Englander mentality that harks back to the days of Empire.

It believes that by cutting itself off from its ties with the European Union, a ‘sovereign’ Britain can attain the power and prestige it once enjoyed as the Empire on which ‘the sun never sets’.

A key tactic of British imperial strategy for much of the eighteenth and nineteenth centuries, and part of the 20th century, was the use of gunboat diplomacy. This was used when the British Empire wished to extend its economic and political influence and power, or curb the desire for independence by others, without the necessity of a full scale military intervention. British gunboats would be sent in to blockade ports and threaten governments. It was the brazen use of intimidation and the threat of greater violence to achieve its objective.

Of course the British were not alone in using this tactic. All of the European colonial powers used similar tactics. However, as the largest Empire ever in the history of humanity, and with a navy providing it with unrivalled power, the use of gunboat diplomacy allowed the British to hold hundreds of millions of people across the world in thrall to its demands and exploitation.

Last week gunboat diplomacy was resurrected by the British government. The weekend headlines in the British tabloids spelt it out: ‘We’ll Send in Gunboats’.

Four British military vessels are on stand-by to take to the seas around Britain to defend its fish.  One newspaper headline spoke of “Royal Marines abseiling from helicopters on to French vessels” to “arrest fishermen.”

Will the EU or indeed any of its member states feel moved to change their stance by a threat to use gunboats? Unlikely. What this does signify is that the narrow-minded Little Englander mentality that narrowly won the Brexit referendum in 2016 continues to be a potent force within the British political system. A further reason for Scotland and Wales to increase their efforts to achieve independence and a potent reminder to United Irelanders of the importance of achieving the unity referendum contained in the Good Friday Agreement and of winning that referendum.