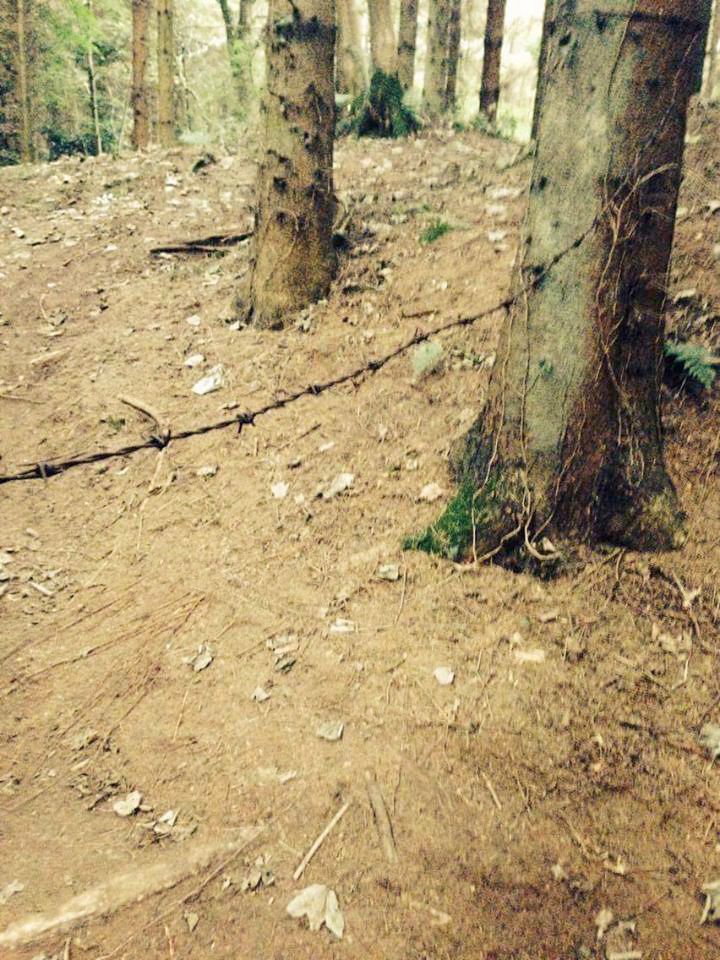 The barbed wire laid across the trail at Hydebank

WORRIED mountain bikers have said it’s only a matter of time before someone loses their life after the latest sabotage incident saw barbed wire stretched across a popular South Belfast trail.

The wire was discovered on Wednesday evening past by bikers who use the Hydebank Park trail near the young offenders centre – one of the most popular trails in a local network of trails used by bikers that includes Belvoir Park and Shaws Bridge.

Biker Bernard McClure, who runs a popular social media page for cyclists, said there was a lot of concern that saboteurs were stepping up their attempts to injure riders.

This comes a few days after the incidents on the Cave Hill where fishing wire was   used in a bid to injure bikers,” he said. “Until now it has been logs put across the trails but the barbed wire is a worrying escalation.”

The barbed wire has now been removed but mountain bikers on trails are having to exercise extreme caution as the number of traps beings set continue to increase in number. As the busy weekend approaches it’s feared that other traps may be set and some cyclists, particularly those taking part in group events, are having the trail examined before they set off. But it’s feared that unsuspecting lone recreational cyclists may be in particular danger.

Bernard says he believes the person or persons behind the incidents are copying other saboteurs.

“Someone tried to do the same thing at Rostrevor but it was discovered just before a race took place thankfully. That might have given this person ideas.”

The North Belfast News understands this incident wasn’t officially reported to the police, but speaking about similar recent incidents in the north of the city, Inspector Roy Burnside said it was a matter they were taking very seriously.

“This was an unbelievably dangerous thing to do,” he said. “Whoever was responsible could have caused serious injury, or worse, to anyone using the track had this wire not been found by a member of the public, who I commend for his vigilance.

“This area is open to the public and I would appeal to anyone who saw any suspicious activity in the area at any time, or who can provide any information as to whoever carried out this reckless act, to contact police on 101.

“Alternatively, information can be given anonymously through Crimestoppers on 0800 555 111.”