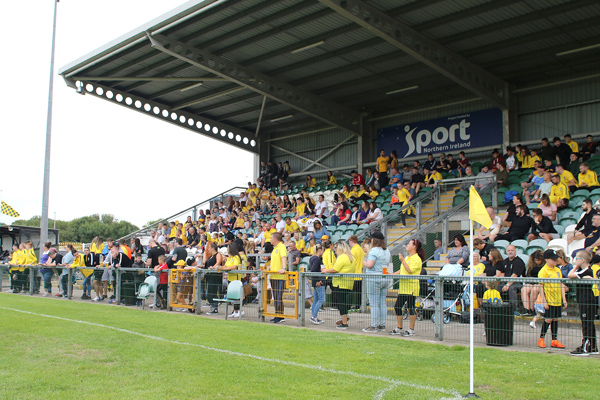 THE main sponsor of both St James’ Swifts and Billericay Town said Sunday’s pre-season friendly was a “memorable” occasion for all associated with the two clubs.
Businessman David McCartney of DMC Contracts attended the match, which was held at the new home of the West Belfast club, Donegal Celtic Park, after a ground-share deal between St James’ Swifts and the Suffolk Road club.
Twelve months ago, St James’ Swifts travelled to Essex to play a series of games at U16 boys, ladies senior and first-team level and Sunday marked the return as West Belfast hosted Billericay Town of the National League South.
“It was all about getting the two clubs together yet again,” explained West Belfast man McCartney.
“I want to try and further cement a partnership between the two clubs. It was stressful to get it put together but well worth it in end.
“There were a lot of happy faces out there – great to see so many kids in their St James’ Swifts colours.
“It was also good preparation for both teams ahead of the new season. Billericay are obviously a few levels above the Swifts, but it was good experience for lads to play against players at that level.
“It would have been nice for Swifts to get a goal. I’m sure Jamie O’Hara will get a lot of stick for his penalty miss over the next few weeks.”
St James’ Swifts Chairman, Damien Lindsay, who formed the club in 2010, thanked the local community who came out in their numbers for the occasion.
“What a brilliant day,” said Lindsay after the game.
“We asked for the community to come out and support us and they did. They came in their colours and numbers and it was great to see supporters from other clubs there too to support us.
“A special thanks to all volunteers who helped out on the day with everything from selling merchandise, security and operating the food and drink stalls. It was a much bigger crowd than we anticipated, so a huge thanks to everyone who turned up.
“Billericay are obviously a quality side and I’m sure they will have another great season as they progress through the divisions.
“For us, we want to keep progressing as a club. We are happy with our new signings and we will be a hard team to beat this season.
“It’s a new era for the club at our new home at Donegal Celtic Park and I hope we can get big crowds every week.
“I am already looking forward to going over to Essex in the near future for what will be another wonderful occasion for both clubs.”
St James’ Swifts are in action next as they travel to Glebe Rangers on Saturday, August 4.
The Swifts kick off their Ballymena and Provincial League campaign at home against Newtowne on Saturday, August 11.