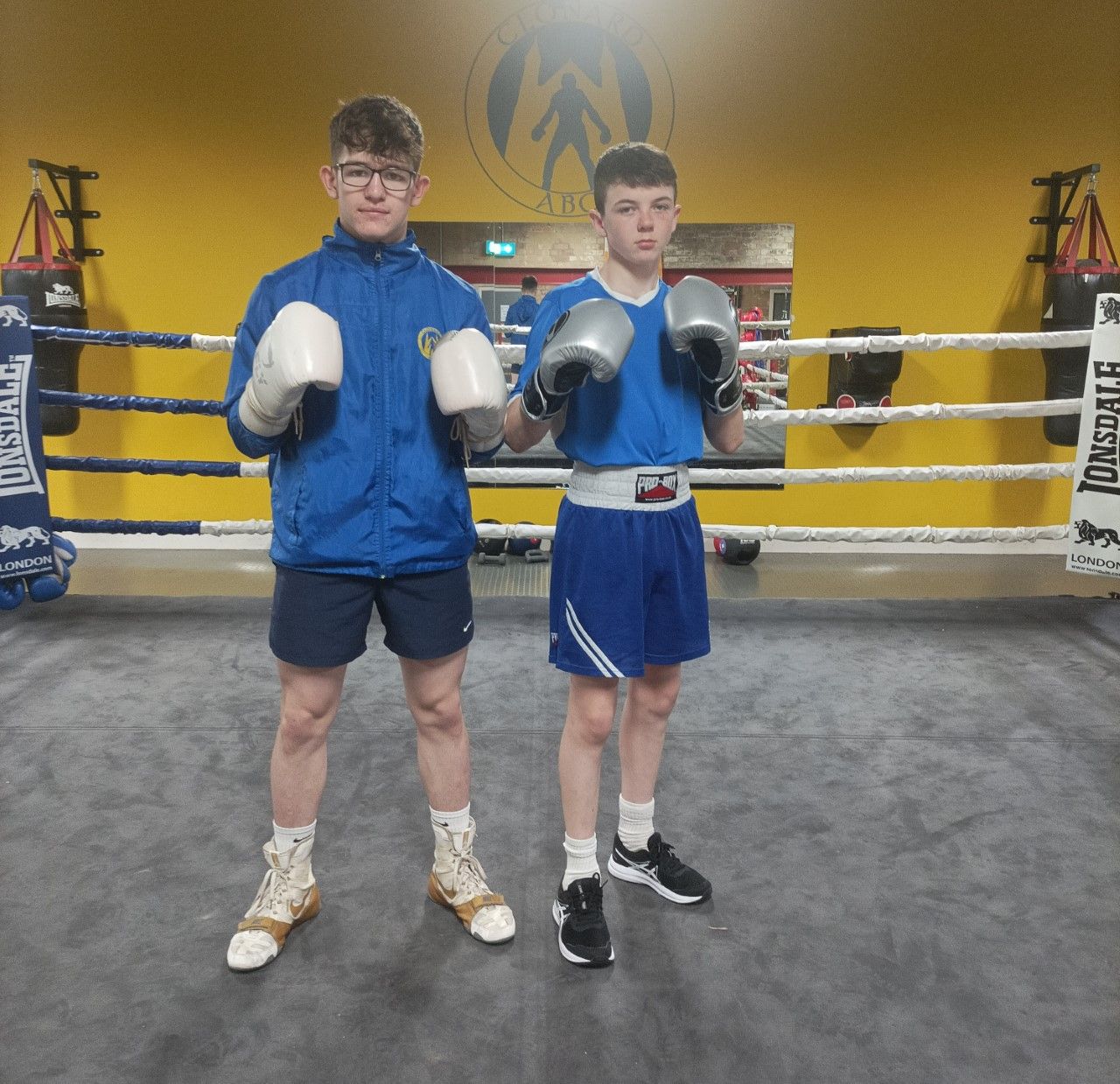 Darragh Smyth (left) will fight on the Battle of Belfast at The Devenish on Thursday, while Jamie Graham (right) will head to the United Stated with the Bridges Beyond Boxing team in August

TWO young Clonard ABC boxers are getting set to take on American opposition in the coming weeks on either side of the Atlantic at part of the Bridges Beyond Boxing initiative.

On Thursday evening at The Devenish, Darragh Smyth will fight on the Battle of Belfast card as Ireland takes on a Detroit team that has travelled over as part of the programme that will see young fighters head in the opposite direction in August, with Jamie Graham getting his chance to fight in Detroit, Cincinnati and Boston.

It is a huge opportunity for the teenagers who have high hopes of push onto Irish titles later in the year with the Irish Cadets on the horizon as well as the Monkstown Box Cup, so sharing the ring with American boxers will help them hone their skills as they seek major honours in the future.

"I can't wait as it's my first time boxing internationally, so I'm just hoping to gain good

"I have the Cadets in a month's time and I'm hoping to get onto the Irish team for the Europeans, so it will be good to get as much experience as I can before that against different style of opposition.

"I'll learn so much about my own style and others. I need that as I want to go far: the Olympics, go pro, so I need to get as much experience as I can get now so I know what I can do when I'm at that level.

"In two years I will be a senior boxer, so I'm watching the Europeans now and seeing Gabriel Dossen win gold shows me where I want to be. Boxing America here then at Monkstown is great to get me into that position."

It has been a busy year for Smyth who has already fought 10 times, but is happy to keep his foot on the accelerator to push on in his quest to gain that elusive national title having already enjoyed Ulster and Antrim success.

The two years of restrictions didn't help as he missed out on some opportunities, but intends to make up for it now, beginning at The Devenish this week and then getting his chance to fight across the Atlantic in the future.

"I've won every competition apart from the All-Irelands, so I'm making that my goal," he insists.

"I've a good period ahead with the international against USA, the Cadets and then the Monkstown Tournament in Dublin.

"Usually there would be a break in the summer and I've fought 10 times already, but it's just straight back in and I'd prefer that as I want the experience and want to box in different places.

"Over the two years I felt some opportunities went with the European juvenile level, but there's nothing I can do about it except make up for it now, get as many fights as possible and get better.

"Hopefully I can build some relationships because this group will go to America at another time so building those friendships will help as you know them and we'll be in here training with them on Tuesday. This is to build bridges and connections through boxing, so I hope to do that."

His Clonard clubmate, Jamie, is gearing up for that trip to the three USA cities and he too is hoping to use the experiences to boost his bid for national honours.

The 15-year-old, who boxes at 48 kilos, has already enjoyed international action before, taking on American opposition at the Europa Hotel so is looking forward to the challenges that await him across the Atlantic.

"It's a huge opportunity and great to be going," he said.

"It was supposed to happen a while ago but then Covid hit, so now we're finally getting to go.

"We're going to three different cities, so I will get fighting at least twice which will be great. I expect two go good wins, get great experience and add more to my game as I will be training in Detroit.

"I've fought against America before at the Europa Hotel and won, so I'm used to that American style a bit that is very like what (Floyd) Mayweather had."

Clonard coach Peter Graham believes the opportunities for his two fighters is fair reward for their dedication to the sport and believes the experiences will make them better-rounded fighters.

It will be busy for those fighting over the summer, but the momentum gained by going from tournament to tournament will help them in their quest to break into the international teams that can propel them onto big things in the sport.

"They are two of our better lads who have been training since they were kids," Peter noted.

"They have a lot coming up with the Monkstown Cup which is a big international tournament and then a week later they are into the All-Ireland Senior Cadets.

"If they win then they are on the team to go to the European Championships so it will be busy.

"Darragh is fighting against America next week and Jamie is away in August, so they are flat out. Both won the Ulsters last month so have won everything coming up apart from the All-Irelands, so that is the one both want and they will get there. The more titles they win, it gives them a better chance to be picked for the big tournaments."

The Battle of Belfast takes place at the Devenish Complex on Thursday, beginning at 8pm. Tickets are £20 ringside, £10 general admission and £5 for kids. Contact 07802246549