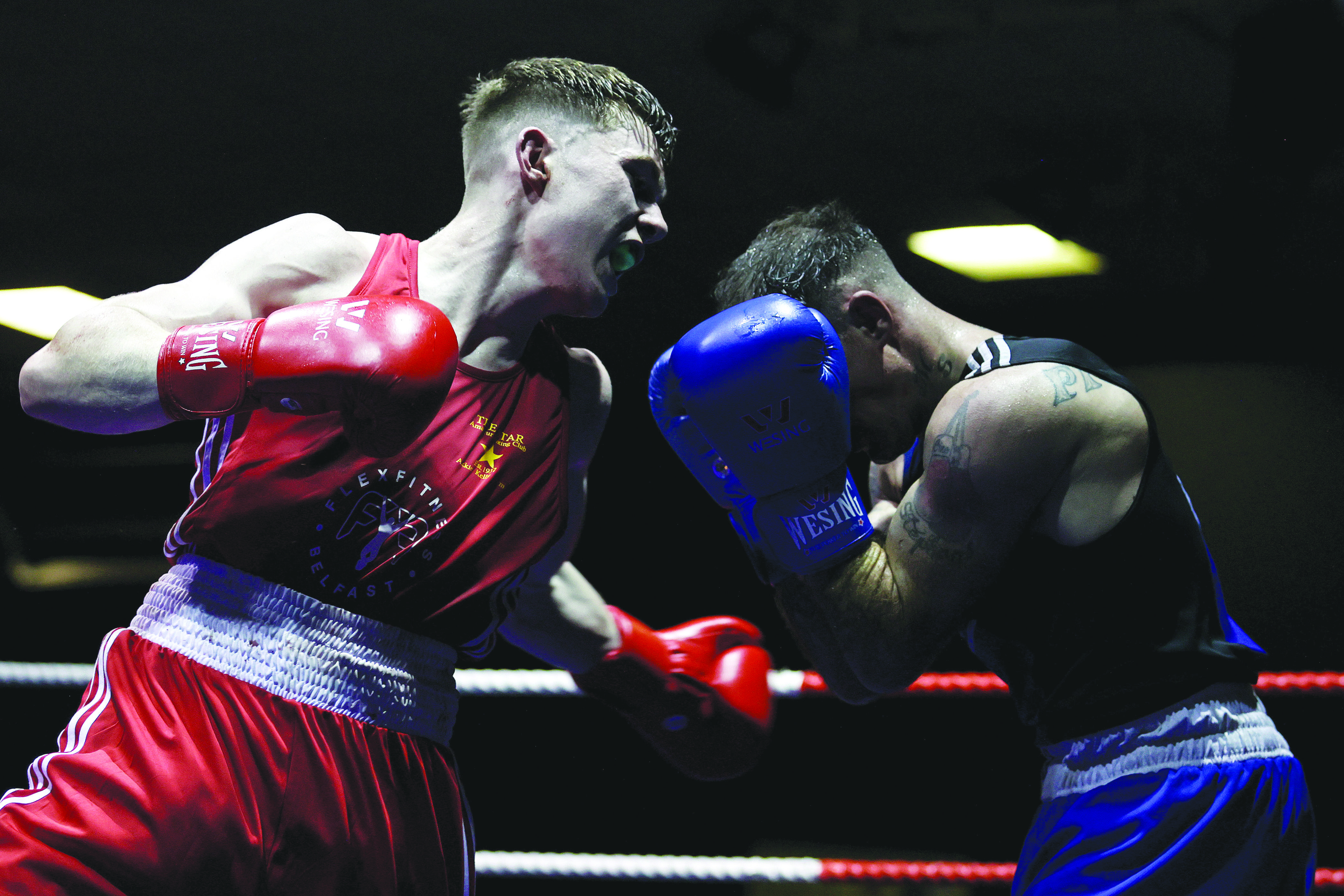 Star ABC’s JP Hale in action against Michael Stephens in Friday’s semi-final that set-up a lightweight final against Dominic Bradley. The finals will be broadcast live on TG4 this Saturday INPHO

ONE of the highlights of the Irish boxing calendar returns to the National Stadium in Dublin on Saturday night as the Irish Elite Championships reach their conclusion.

Having been absent in 2020 due to the pandemic, the South Circular Road venue will welcome boxers bidding to be crowned national champion for 2021 although it will be a rather eerie atmosphere due to the absence of spectators.

This year’s edition has seen a number of withdrawals from the initial entries including all of the Irish Olympians with it confirmed this week that Brendan Irvine, who was due to contest the 54kg bantamweight final, has been advised to withdraw, meaning that Jake Rapple gets a walkover.

However, there are still a number of locals in action as they aim to claim what would be a first Irish Elite title on the night.

St George’s light-welterweight Jack McGivern will be hoping to emulate older brother James by becoming a National Elite champion when he squares off against defending champion Brandon McCarthy from St Michael’s Athy in the new 63.5kg (formerly 63kg) class.

McGivern was in sensational form in his semi-final on Saturday as he stoped Scorpion’s Nathan Richmond in the first round, with McCarthy a unanimous winner of Holy Trinity’s John McConnell.

The Lower Ormeau man has been in fine form but will be tested against the Kilkenny native who is on an equally impressive run, yet will hold high hopes he can edge what could be a top-class contest.

“James was the first to say that after two years (out of action) he thought I’d have liked to get a few rounds in,” said Jack, who has been invited into the Irish High Performance Unit.

“I didn’t go out looking for a stoppage - I just wanted to knock the rust off for the final - but once the chance came I took it with both hands.

“At the start of this tournament, I was using it for experience and to get back fighting for the Ulster Elites as they are the Commonwealth Games qualifiers.

“Now that I’m here in the final, I want to win it. I’m not just using it to knock the rust of after two years, I’m going down there on Saturday looking to bring home the trophy.

“It’s great to be going back in against a quality fighter. I think he’s won 13 or 14 Irish titles and hasn’t won them for nothing, but it’s good in a way as I’m going down as the underdog and all the pressure is on him to win. There’s no pressure on me and I can just go down there to enjoy myself.

“I’m fighting for the same trophy that James won so it would be great to have my name beside his.”

More action from the #IrishEliteChamps this Saturday

The 60kg lightweight final between Star ABC’s John Paul Hale and Derry native Dominic Bradley, boxing out of the Emerald club, is another contest that jumps out and could be the fight of the night.

Hale was in excellent form on Friday as he scored a 5-0 win over Drimnagh’s Michael Stephens to claim a unanimous decision victory, with Bradley equally impressive in his 5-0 win over Cookstown’s Two Allen.

The 20-year-old from North Belfast is a two-time Ulster Elite champion and having lost out in 2019 to eventual winner Dean Clancy, he feels this is his time having taken confidence from his semi-final win over Stephens.

“It feels amazing because every time I’ve boxing in the Elites before, they (opponents) have gone on to win it, so this is finally my chance,” said Hale who is hoping that victory will help build a platform towards next year’s Commonwealth Games.

“I just waned to show (on Friday) that I could box and not make it scrappy for myself. I wanted to be sharp and wait for him then get out of range again, but there were two times in went for a 50-50 (exchange).

“If I get this it gives me a better chance of getting to the Commonwealths. After the Ulsters I have always wanted to progress and get the Irish title so it’s always been step by step.

“I haven’t fought him (Bradley), but have sparred him before. I know if I’m on my game then I should get it, but I know I have to be 100 per cent shape throughout. It would be class to get the Irish Elite title.”

In the 51kg flyweight decider, Paudraic Downey will also be going to land a first Irish Elite title as the 20-year-old from St John Bosco faces Letterkenny’s Paddy McShane.

Downey received a bye into the final with McShane a Technical Decision winner over Michael Stokes on Friday, so while there may be a little rust having been out of competitive actin for so long, he has still prepared well and will be hopeful of claiming a huge win that would set-up the rest of the year.

“He’s been very unlucky in finals in the past, so we’re hoping this is his year,” said coach Gerard McCafferty.

“He’s sparred well but it’s the same as all of the young kids, they missed out on senior boxing for two years there when they turned 18 and are jumping straight from Youth into Elite boxing.

“He is big enough at the weight and had plenty of experience, boxed across the water a few times and also internationally.

“Any other year you would be nervous, tired or overtrained, but they have all had a good rest and are busting to get back in the ring.

“Boxing in the Stadium with nobody in it apart from coaches will be a big thing, but that could help us as it events the score up a bit.

“We have never been up against him (McShane) before, but we’ve been sparring Ricky Nesbitt who beat the Elite champion Sean Mari before, so we know where we are as he is able to handle Nesbitt.

“He’s been with us since he was eight and is on the High Performance team already and we’ll be looking to go to defend his Celtic Box Cup title after this then move onto the Ulster Elites and hopefully Commonwealth Games selection.”

Another West Belfast boxer, Caitlin Fryers, will be gunning for national glory as the Immaculata light-flyweight faces Antrim’s Nicole Clyde.

Fryers, a former World and European Youth medallist, will also be making her bow in these championships having been given the bye and comes up against Clyde who took a unanimous decision over Nycole Hayes in her semi-final.