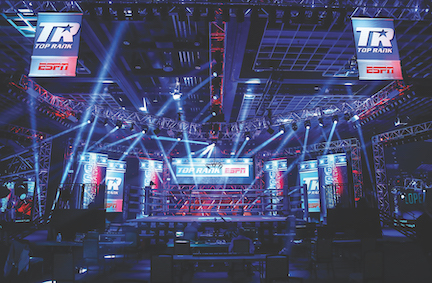 ON WAY BACK: Live boxing returned to our screens last week as Top Rank hosted two fight nights from the MGM Grand in Las Vegas

THE 'new normal' - a term that that has slipped into our everyday conversations is no less real than it has become almost tiresome.

Whether it is transport, shopping, work or our downtime, it's widely accepted that the old ways of doing things are gone and perhaps may never return as we once knew.

That reality will extend into the world of sport and whilst fans and participants long for the days of packed stands to return, it will take some time so we are forced to accept 'behind closed doors' action for now.

There has already been a glimpse of that in soccer with Germany's Bundesliga giving us a peek into games that have been played in eerie surroundings despite some clubs have 'filled' their stadium with cardboard cut-outs of fans and fake noise to try and amplify the fare on offer.

Piece-by-piece, sport is gradually making its return with Gaelic Games at club level set for a return at the end of July, whilst boxing on this side of the Atlantic is also expected to resume in July.

The opening bell did sound last week as Top Rank hosted two fight nights from the MGM Grand Conference Centre - Grand Ballroom in Las Vegas (or as baptised for this series - 'The Bubble') with the only people permitted inside the room were fighters, their team, officials and TV production members.

This will be the beginning of a series of fight nights for the promotional behemoth that plans to put on fight cards each Tuesday and Thursday with the odd Saturday thrown in.

Other promotional outfits are expected to follow suit, but it can be guaranteed that all had more than one eye on Tuesday evening's opener as WBO featherweight champ Shakur Stevenson made his bow up at the higher weight of 130lbs as he blasted through Felix Caraballo in six rounds.

No fight date yet, but @TeofimoLopez is getting ready. 💪 pic.twitter.com/J5D01QQgsQ

For boxing fans, it was worth sitting up to get a glimpse of the man being touted at the 'new Mayweather' dipping his toes at super-featherweight, but part of the intrigue was how the whole production would come across with no fans in attendance, especially such a set-up is planned to this city city in the near future.

Bob Arum and Top Rank have been in the fight game for over 50 years so they were never going to be found wanting in making the set-up aesthetically pleasing and so it proved, with all the bells and whistles forming a backdrop that almost distracted from the lack of paying punters in attendance.

The five-fight card give fans a chance to take a look at some of the up-and-coming talents including former two-time Olympic gold medallist and the man who defeated Michael Conlan at London 2012, Robeisy Ramirez, scoring a first round win, with heavyweights Jared 'The Real Big Baby' Anderson (Eminem missed a trick here!) and Guido Vianello also winning inside the distance, whilst Quatavious Cash was a winner on points.

The card did drag out a little as after each fight, the corners, ropes, stools and anything that could possibly be contaminated had to be disinfected so there was quite a lot of time to fill between fights that will be an issue promoters and viewers will have to contend with.

Indeed, there was almost a 30-minute wait before the main event when Stevenson - expected to relinquish the featherweight title that will almost certainly see Conlan contest the vacant strap before long - stepped through the ropes and delivered a quality display to move to 14-0.

On Thursday, it was the turn of Conlan's old gym-mate from his days in LA, Jessie Magdaleno, to live inside this particular 'Bubble' with the Mexican-American dropping Yenifel Vicente in the first and fifth rounds to eventually prevail in this featherweight scrap with a disqualification victory after Vicente had three points taken off him for low blows in the fourth and for the final time in the 10th.

This card began a little later in order to avoid the need for so much 'filler' and started with a bang as Adam Lopez prevailed over Louie Corianders.

It had to be expected there would be teething issues with this 'closed doors' concept, but it did give us a glimpse into what fans here can expect in the immediate future when boxing returns.

A host of local fighters are already confirmed for fight nights such as this in London, beginning next month with Carl Frampton and Conlan expected to box in the BT Sport studio - possibly on the same card - in early August at the latest, so it will be interesting to see what promoters have taken from Top Rank's initial offerings.

It will be some time before we see a packed out SSE Arena or Ulster Hall, so whilst this 'new normal' in sport does have its downside, it's also something we will have to get used to for a while.

But going on last week's initial foray, it's one I think we can live with.