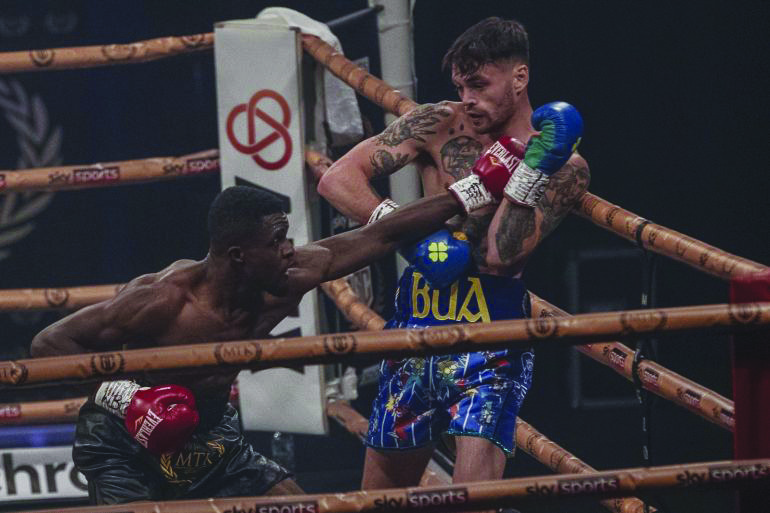 Tyrone McKenna lost out to Ohara Davies in September’s light-welterweight ‘Golden Contract’ final but instead of being content to rebuild against lower-level opposition, the Lenadoon man has jumped at the chance to take on Zhankosh Turarov MTK Global

IT’S a case of ‘out of the frying pan and into the fire’ for Tyrone McKenna at Caesar’s Palace in Dubai this Saturday when he bids to inflict a first career defeat on explosive Kazakh, Zhankosh Turarov and claim the WBO Inter-Continental light-welterweight title in the process (live on IFL's YouTube channel around 9pm).

‘The Mighty Celt’ lost out to Ohara Davies in their grudge match ‘Golden Contract’ final back in September, but rather than look to rebuild with some straightforward assignments, the 31-year-old Lenadoon southpaw asked to jump straight back in at the deep end.

It is an admirable stance from a man who likes to entertain. This fight is certainly in the high-risk, high-reward bracket as a victory will push him straight up the world rankings but comes with a warning sticker as he is in against a man who has looked the part throughout his career.

Changing my ways for no1
Not long niiiii
UnTil
Fight night pic.twitter.com/AmvoQfAuKV

Such a prospect is one that has motivated McKenna to push himself to the limit in preparation for this desert dust-up, but it is one that has got the juices flowing following that defeat against Davies.

“After the loss I thought I didn’t want to go back and have a warm-up fight against a journeyman to get back to winning ways,” said the former St Oliver Plunkett amateur.

“I’ve always thought that’s a stupid thing to do and have never really seen the point in it. I wouldn’t be able to get motivated for lower-level fights. Some people do take those fights, then don’t switch on in camp or on the night and end up losing. That’s something you run the risk of if you’re fighting someone you should be beating.

“I just asked Jamie (Conlan, manager) for one that will get me out of bed in the morning and he came back with Turarov. He is undefeated - 24-0 - hits hard and he’s very talented so that has got me excited for this dust-up.”

The Belfast man has garnered a reputation for his willingness to have a tear-up in spite of the considerable height and reach advantage he holds over most in the 140lb division.

Under the guidance of Pete Taylor, he changed tact in the Davies fight by sticking to his boxing and using his long levers to seemingly do enough to score a win, but two of the three judges scored it the other way with the third having it even.

A defeat in that manner might have crushed the spirit of many, but not McKenna who took positives from his performance and indeed, encouraged that he is capable of mixing it at a high level.

“A lot of people thought I won the fight and I thought I had won, but the judges didn’t see it that way,” he reflects.

“It showed I am a high-level fighter, a world-class fighter. Ohara Davies is number 10 in the world and a lot of people thought I beat him that night, so it proved I belong at this level.

“I still believe I can be a world champion, so I don’t want to be going backwards. I’ll keep moving forward, so obviously that fight didn’t deter me too much. I still want to fight and beat big names, and I believe I can.”

Perhaps McKenna’s approach of boxing to a game-plan may have ironically counted against him against Davies as those at ringside who are used to a blood and guts approach saw a man who came to box rather than brawl.

Did this subconsciously seem as though he was having an off night? Perhaps that was the case, but in the aftermath ‘The Mighty Celt’ vowed to go back to what he knows and loves best, by standing in front of Turarov and engaging.

“I think I was the technically better fighter and landed more punches, so I find it ironic that boxing skills don’t win you boxing matches,” he continued.

“I’ll be going right back to wars now. I love going in there and having a tear-up so if that’s what I have to do more, I’ll do it.

“Pete Taylor (coach) agrees that boxing doesn’t get as much credit as it should when it comes to judging. We’re not going to be stupid and just rush in to have a tear-up for no reason. It will be educated pressure and educated boxing, but we just won’t be on the back foot as much.

“I want to give the fans what they want and do what I need to win the fight.”

Educated pressure, rather than a gung-ho approach, would be the wisest course of action against Turarov who has stoped 17 of his 24 victims to date.

One thing that may count against him is inactivity as his last outing occurred in July 2019 when stopping Mauro Maximiliano Godoy in three rounds for the belt that is on the line this Saturday.

That performance was typical of Turarov who used his own brand of educated pressure to set up a third-round finish. He possesses an excellent jab, clever movement to apply pressure and is a strong puncher to body as-well-as head.

He is also an excellent finisher once the opportunity arrives but can also be caught with his tendency to carry his hands a little low.

McKenna will need to use his jab to keep Turarov off balance and just out of range to deter his attacks but knows he will have to dig in and take at times.

It may not be dissimilar to the Belfast man’s only other career defeat to Jack Catterall who is primed to face the winner of the undisputed battle between Josh Taylor and Jose Ramirez later in the year.

McKenna squared-off against the power-punching Englishman back in the summer of 2018 when he had to pick himself off the canvas twice but dug in and rallied superbly to lose narrowly on the cards.

The experience of that fight should stand to McKenna who knows he faces a tough task this Saturday, but it is one that he knows could open the door to some huge opportunities.

The eyes of the boxing world will be tuning in for the main event that will see another Belfast man, Carl Frampton, bid to create history. It could be a night of glory for the city and McKenna is determined to play his part.

The risk is high, but the rewards are there should he prevail. It will not be easy, but neither is it impossible.

“It’s going to be one of those nights where I’ll have to dig deep, so I think it’s going to be a very tough fight as he is very good and capable. I just think the grit, heart and balls I have will help me prevail,” he predicts.

“This is an unreal opportunity. To have Turarov, the WBO Inter-Continental title (up for grabs) on an historic night for Belfast is massive in itself.

“This is a massive platform for me to show everyone that I haven’t gone anywhere, and I still have the drive and heart to succeed.”