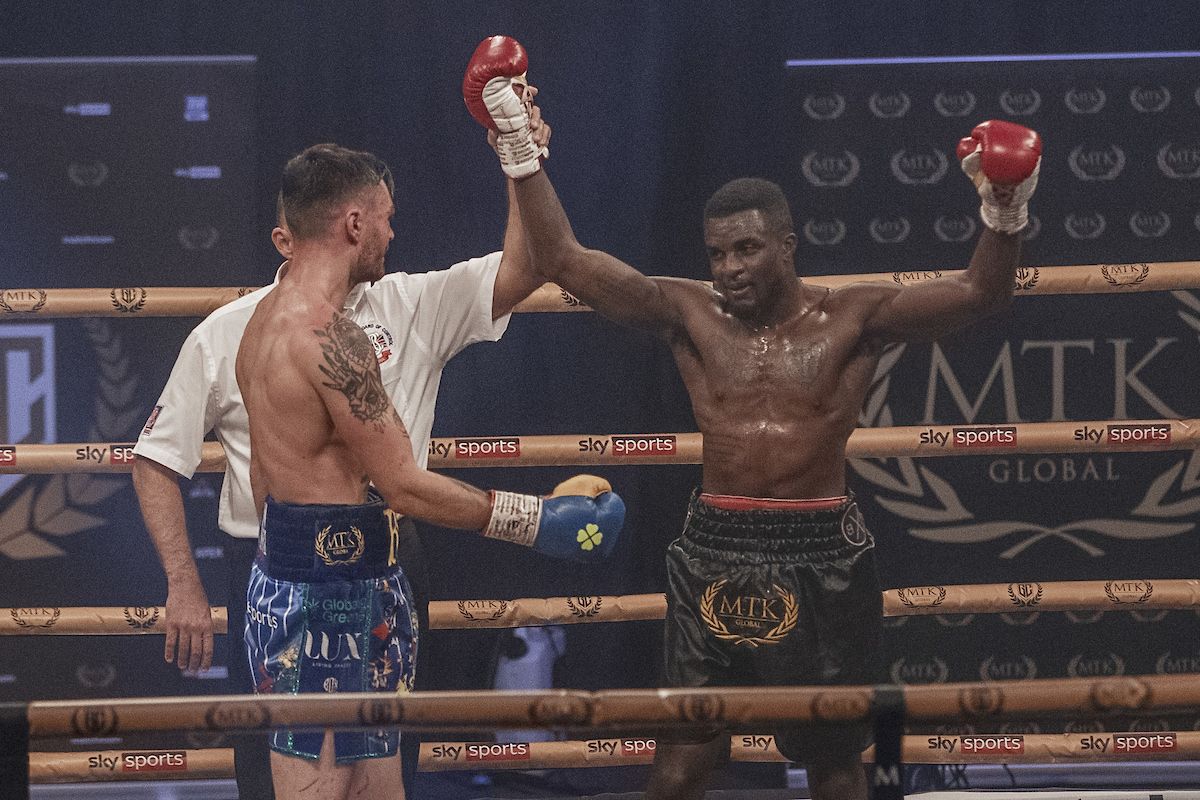 TYRONE McKenna's dreams of securing a life-changing victory and the light-welterweight 'Golden Contract' were crushed as he lost a razor-thin decision to Ohara Davies in Wakefield last night.

The Londoner took a majority decision with two of the three judges scoring it 96-94 in his favour, whilst the third ruled it a draw.

This was an extremely close fight and a case could have been made that McKenna did enough to retain his WBC International title, but it wasn't to be as Davies goes onto ink a lucrative deal with a major promoter.

"I'm not going to cry and say 'robbery' - the judges saw what they saw and thought Ohara did the better work," said the Belfast man.

"I thought and Pete thought when I was going back to the corner after every round that I was boxing brilliant and what I was doing was working.

"Ohara came out in the last few rounds to try and put pressure on to end things because he knew he was behind, but he got the decision and there's nothing I can do about it."

McKenna enjoyed the better of the initial exchanges, boxing out of the southpaw stance that had the Londoner problems in the past.

Whilst the Belfast man enjoyed a considerable height advantage, there wasn't much in reach as Davies popped out jabs and looked for a way in from a crouching position, but McKenna was picking him off early and trying to avoid the wars he is renowned for.

The Peter Taylor-trained fighter was reading Davies well and beating him to the punch, producing a disciplined performance early off the back foot.

Davies began to find his range early in the third as he upped the pressure but was picked off by a long, left counter in a round that came to life a little towards the end and the pair exchanged a flurry on the bell.

This was a sign for this fight to open up with Davies loading up, but his attacks were a little slow and predictable as McKenna read his intentions and returned with better, even pushing forward and willingly standing in range as his confidence grew.

The Belfast man was putting himself in the danger zone but seemed happy to take Davies' best shots to get his own off as the fight moved into the second half, yet these shots were evidently swaying the judges.

Both continued to have their moments with Davies finding a home for his right, but McKenna was able to return fire although a clash of heads opened a cut over his right eye.

McKenna enjoyed a fine seventh but was on the receiving end of the heavier shots in the following round as this fight remained all to play for.

Both men looked to take this argument by the scruff of the neck but there was little to choose between them as they entered the final three minutes with the heavier shots coming from Davies, but McKenna was producing some excellent work to make his own case.

With the fight in the melting pot, McKenna seemed slicker, boxing excellently as Davies appeared out of ideas and the hunch was the Lenadoon man had done enough to get the nod. Ultimately, it wasn't enough as he fell to a second career defeat and must now look to park the disappointment of a night when his efforts came up inches short.

"I always thought I have proved that I belong at this level," he added.

"I beat Mimoune who was higher ranked, got beat by Jack Catterall by one point and he is going onto fight for a world title, so I've always shown I belong at this level.

"Even though I got beat there, I don't want to go backwards. I believe there are a lot of big fights out there for me domestically and internationally."

STEVEN Ward made a winning return to action on the undercard as he cruised to a 59-55 points win over Jone Volau.

'The Quiet Man' was making his cruiserweight bow having lost out in a 'Golden Contract' light-heavyweight quarter-final in December and the extra 25 pounds in weight seemed to make a major difference as he looked in fine condition, boxing at a good pace and using his skills to get back on the winning trail.

"I'm over moon with the performance," he said after.

"I wasn't going in to get the guy out of there with this being my first time at cruiserweight and boys hitting a bit harder.

"Twenty-five pounds (in weight) is a big jump but I did what Nigel Travis and Jamie Moore have been telling me, stuck to the boxing and felt like I could have done that for 12 (rounds)."

It was a lively opener with both men looking to find the target with solid shots and th Fijian found the mark with some looping rights as he tested Ward who got through with some stiff jabs.

Ward settled in the seconds using his superior height and reach to keep Volau out of range as he began to use his superior boxing skills to dominate.

The pattern continued as Ward boxed excellently with Volau chasing shadows for the most part, sinking in the odd body shot in an effort so slow the North Belfast man down, but his moments were fleeting.

Ward was content to use his superior skills, popping out the jab and did manage to get through with an eye-catching overhand right and left counter in the final round as he marked his cruiserweight debut with a solid victory.

The 30-year-old improves to 13-1 and believes he is already capable to challenging for the British title in the near future, but was delighted with his night's work to get the ball rolling at the bigger weight.

"I would love to fight for the British title before the end of the year and I have the ability to," he insisted.

"Tonight was about running about, working in there, making sure I could do what I'm told and keeping everything textbook, but it worked.

"He was a tough lad but I felt good in there and that this is my natural weight, so that was only the tip of the iceberg."