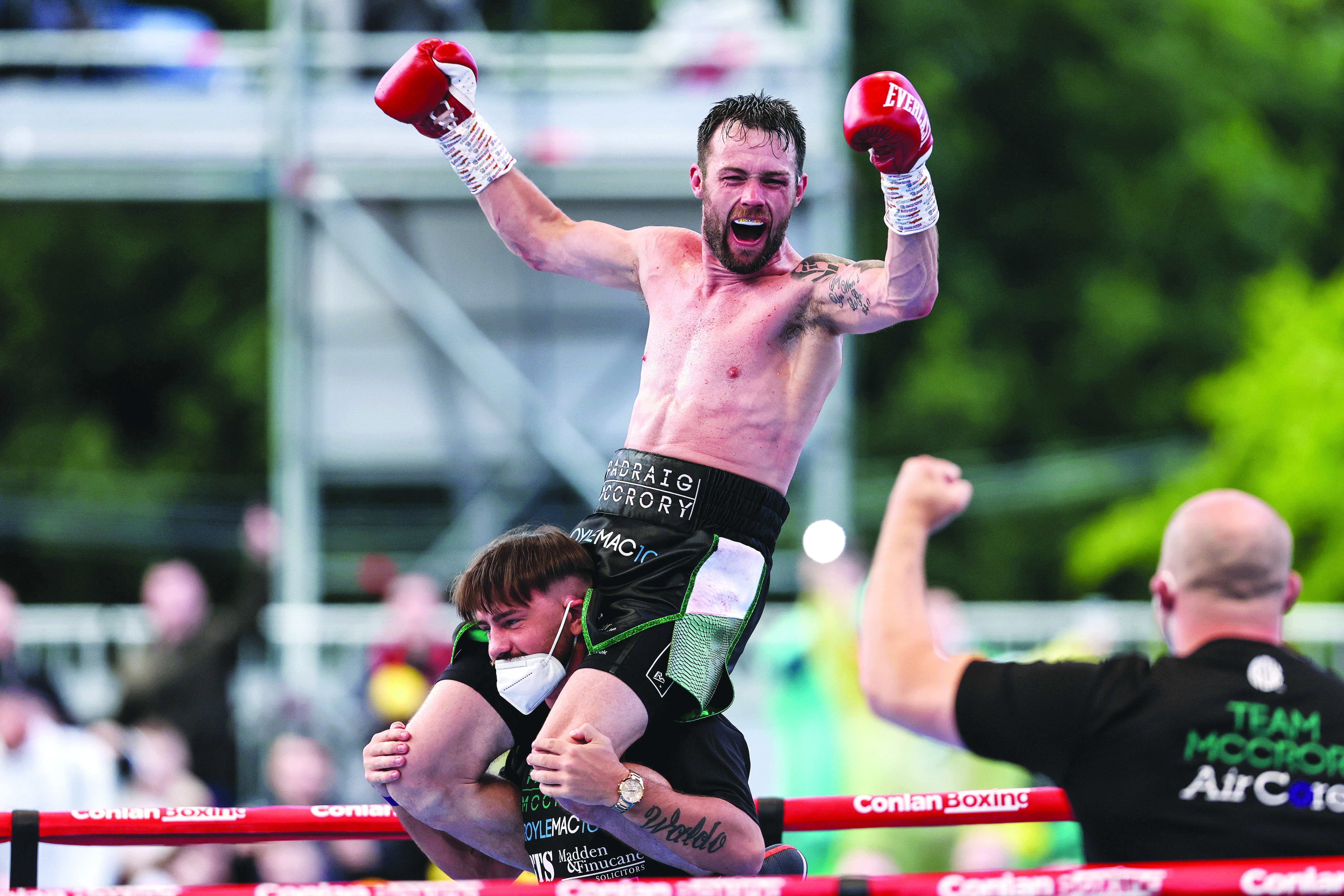 “CHOOSE a job you love and you’ll never have to work a day in your life,” was once said by Chinese philosopher Confucius, born in 551 BC during an era known as the Spring and Autumn Period.

It’s a quote that retains relevance to this day and immediately springs to mind as trainer Dee Walsh arrives at Gleann Boxing Club on a Friday morning for another day moulding fighters in the midst of his own busy Autumn period.

A fortnight ago, Walsh manned the corner for Owen O’Neill who improved to 7-0 with a points win over Naeem Ali at The Devenish and two weeks on Friday (November 5), he will again walk to the ring with Padraig McCrory and Lewis Crocker as they defend their respective titles at the Ulster Hall.

A week later it will be The Europa with Colm Murphy, while a host of amateurs are also set for various competitions so it’s fair to say it is a hectic schedule for the St James’ man whose reputation as a coach is rapidly matching the one he enjoyed as a fighter.

Walsh is a man who lives and breathes boxing, so lockdown and long periods of inactivity for him and his fighters was far from ideal, but instead of serving the time, he ensured the time served him as he continued to study the craft and look for improvements he could make as a coach.

Now the gym is busy and fight dates flooding through, it’s time to put everything into practice and maintain what has been a hugely impressive run for his fighters who are all undefeated.

“This is what I’ve wanted from the first lockdown,” he said of the busy schedule.

“I have always studied boxing anyway. From I was about 18, all I’ve done is study boxing and when the first lockdown came I studied even more.

“Last night I was up until about four in the morning watching boxing and carried on this morning before I came here, so it’s good to see people put into practice what we’ve been doing.

“I would say that over the past month, everybody has been tuned in and if there are fights tomorrow - pro or amateur - they’d be ready to go.

“I think the way everything has fallen into place, it’s perfect timing for me as a coach to gain the experience during lockdown with the pros will help the amateurs and the amateurs with he pros.

“I want as much boxing as possible and want to stay as busy as I can.”

O’Neill’s performances over the past 12 months have been much improved from when he first pulled on the gloves a pro and highlights the hard yards being put in behind the scenes.

The North Belfast man is expected to step it up very soon and could still yet appear on the Celtic Clash 13 card in Dublin on November 20, but if not there are rumours of a tasty match-up in the pipeline prior to Christmas.

“Owen has improved massively and you can see that with his last three performances since the first lockdown,” said Walsh.

“It’s evident how hard he’s ben training and it (lockdown) has been a blessing in disguise for him.”

Crocker and McCrory are certainly in action next and in a fortnight’s time, the Ulster Hall will again be packed as fans return to the Bedford Street venue for the first time since the pandemic hit for the Conlan Boxing fight card.

McCrory will make the first defence of his WBC Silver International super-middleweight title against Portuguese native and Swiss resident, Celso Neves, while Crocker will put his WBO European strap on the line against Artem Haroyan.

“I know a lot of people who boast they have fought for titles, but didn’t win any,” Walsh noted.

“In this gym, we’re starting to rack up the belts and defending them is as important. Boxing is so hard, especially over 10 or 12 rounds, but seeing the improvements in everybody each day is important.

“I want to see their performances at the Ulster Hall because they’re put it in.”

He certainly got a performance from McCrory at the Falls Park back in August when ‘The Hammer’ blasted through what was supposed to be a major hurdle in Russia’s Sergei Gorokhov.

However, the West Belfast man rose to the challenge and with a perfect plan in place, just broke the visitor’s heart to force a stoppage and claim the vacant belt.

“Pody fought not that long ago so it’s just rolling on again as he wasn’t out of the gym too long. He will be even better in his next fight and I expect him to be pretty dominant,” Walsh predicts.

“I heard recently they (Gorokhov’s team) expected him to come over here and win well, but Pody didn’t give him a chance. We went over the game-plan and just told him the most important thing is the jab and everything would fall into place after that.

“He found his distance, didn’t really get hit and it couldn’t have went better.”

As for Crocker, the South Belfast man is one who Walsh rates highly and while he had to come through a few tricky moments in his last outing, a points win over Deniz Ilbay to retain his title in Bolton back in March, the manner of the victory was most pleasing.

‘The Croc’ has been highly-touted since switching to the pro ranks back in 2017 with high hopes he can go onto world level and his coach insists the best is yet to come.

“What I loved about that performance from Lewis was that there were times when it wasn’t going all our way and he was able to dig deep,” he continued.

“He came over a bit of adversity as there were times he could have lost rounds, but he dug deep and in the last round it’s the best I’ve ever seen Lewis.

“Everybody in the gym here knows how good Lewis is, but even that performance was only about 30 or 40 per cent of what he has as he’s easily the best fighter I’ve ever seen.”

It won’t be a title defence for Colm Murphy at The Europa on November 13 as ‘Posh Boy’ enters the ring as a professional for just the second time on the MHD Promotions card.

Still, it was a hugely impressive debut for the South Belfast man at the same venue last month as he jumped straight into a six-round contest and dominated Polish journeyman Jakub Laskowski.

It wasn’t just the win, but the performance that caught the eye as Murphy, known as all-action amateur who was keen to get into a war, boxed with much more authority and his display had Walsh’s fingerprints all over it.

“Even from that he’s improved again,” Walsh insists.

“Colm told me that in the past he never really had much by way of a game-plan or a system to work on. You could tell that by his fights as he was always relying on his strength and fitness, but was walking into shots to give shots. Now, it’s totally different.

“Colm is pretty smart and I always feel that the smarter people are, they take things in a bit better. He’s able to take things quite easily and I can tell because if I tell him to do something on a Monday or Tuesday, by the Wednesday morning I’ll see him shadow boxing and he’s doing exactly what we’ve done the day before.

‘It’s obviously fresh in his head and he’s putting a lot of practice in - that’s what I want from all fighters.”

One of the stable who is still to fight under Walsh’s orders is Conor Quinn who hopes to finally return to action in either December of January having returned home after beginning his career in Australia.

The former Clonard amateur was highly decorated in the vest, but moved Down Under to begin his pro journey although the lure of home was too great and he penned a deal with Mark Dunlop.

It has been frustrating year as he has been unable to box due to paperwork issues, but they look set to be resolved and Walsh believes ‘The Magnificent’ will immediately dazzle when given the opportunity.

“Once he’s able to get going he’ll hit the ground running. I don’t care what level he fights at (on his return) because he is unbelievable.

“I honestly think Conor can win world titles at different weights because that’s how good and disciplined he is. He hasn’t fought in nearly two years, but his nutrition and conditioning is perfect. His work ethic - he’s here every day so you couldn’t ask for more.”

There was a palpable buzz around the Gleann gym last Friday as fighters got ready for another session.

The thud of heavy bags, the feet pounding on the ring canvas during sparring and a sense of camaraderie filled the air as fighters continued their preparations for the weeks and moons ahead.

It’s said a happy fighter is a dangerous fighter and if that is to ring true, then expect another series of victories for Walsh and his charges.

The coach sets the mood with his affable nature, but that does not mask a seriousness and appetite for hard work, the mood mirrored by all who form part of the team.

“It’s exciting because everyone is buzzing and happy here too,” he explains.

“I don’t let anyone in here who I don’t like. I wouldn’t let anyone upset the harmony of the gym in here and everyone here is dead on.

“Even the kids and the pros train together sometimes, so I can’t wait to get going and get more results.”