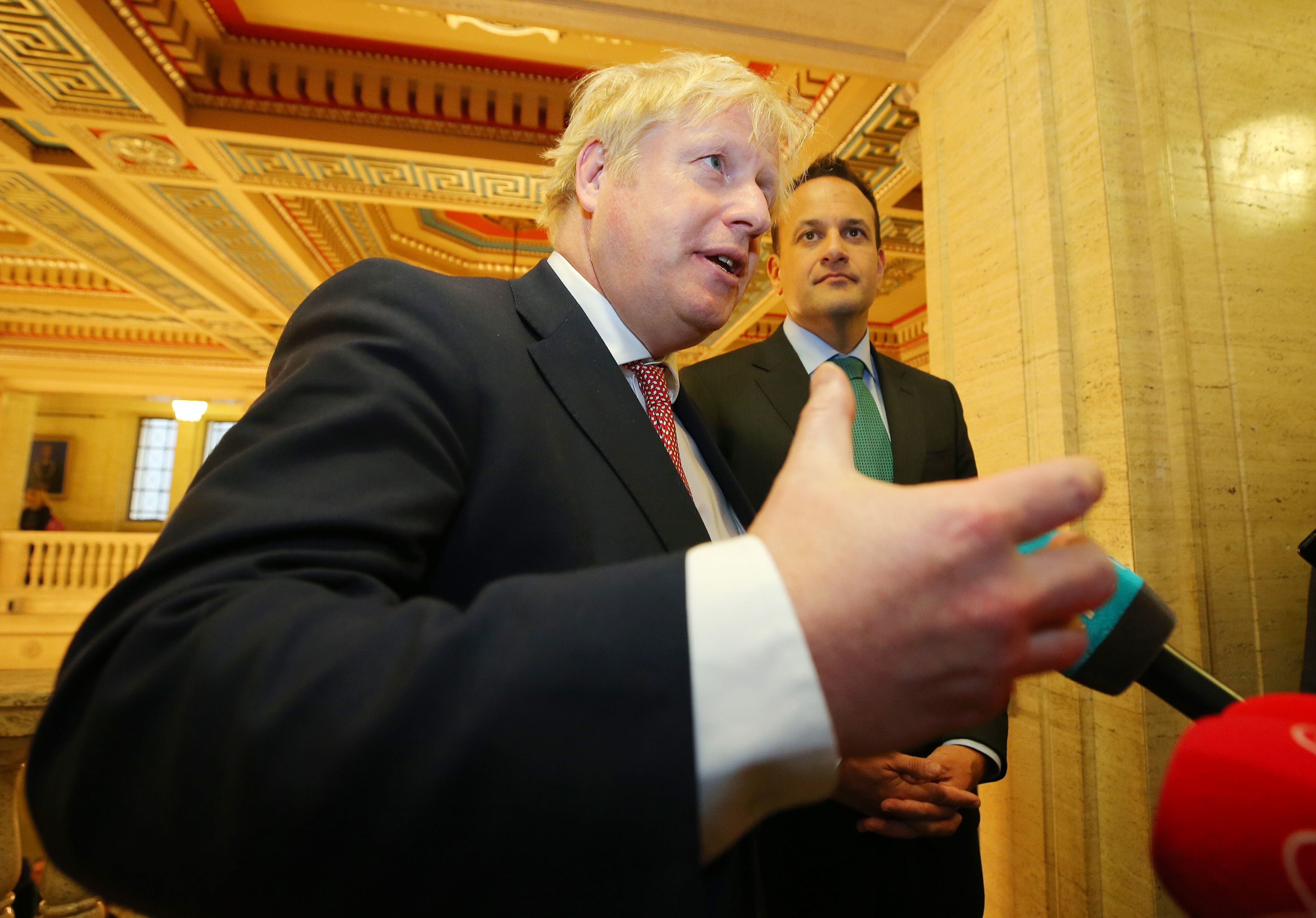 THE Brexit crisis has at times been surreal and bizarre.  The Unionist parties embraced Brexit claiming, as many Tories do, that leaving the EU would make Britain great again!

On the back of the unsuccessful referendum on Scottish independence they asserted that Brexit would solidify the ‘United Kingdom’. This has not happened. Consequently, the referendum campaign in 2016 and the debate since then relied on lies, misrepresentation, and a peculiar form of English jingoism.

This column has no desire to live in a ‘Kingdom’. Even if the High Kings of Ireland came back and if Ted became Ard Rí, as was his ambition once upon a time, I would remain unimpressed. So when the King is actually foisted upon us by dint of colonialism and an accident of birth, hers and mine, my dissenter instincts come to the fore. I want to live in harmonious accord with the people of our nearest offshore island – closer even than Tóraigh – and if they want a Kingdom that’s their own business. Ditto with Brexit. But count me out. I’m also not persuaded that Mr Johnson is serious about any of these matters. His fix is political power. Even though that is a transient matter. Just like kingdoms.

Instead of cementing the Union as Mr Johnson and his cohorts claimed, Brexit and the Covid-19 pandemic, have created significant cracks in the British body politic. More people than ever before are recognising that Westminster prioritises and protects English interests and not those of Scotland or Wales or the island of Ireland. No suprises there. Consequently, all recent polling indicates that Scotland is now closer to independence than it was in 2014.

The debate around independence for Wales has also seen a step change. In recent days an independence Commission published its report in support of independence. Last May a YouGov poll suggested that 25% of Welsh voters now backed independence. And two weeks ago a hysterical front page headline in the Express Newspaper screamed: “Forget about Scotland! It's Wales that could tear UK apart as independence campaign erupts”.

In 2017 the EU acknowledged that the North, which voted to remain in the European Union during the 2016 referendum, could, in the event of Irish Unity, rejoin the EU without negotiation or complication. Allied to the political and demographic changes already taking place and despite the shortcomings of the EU this intensified the conversation that was already taking place for the setting of a date for the referendum on Unity provided for within the Good Friday Agreement.

Last year’s Withdrawal Agreement and Irish Protocol angered unionists and elements of the British Conservative party because it guaranteed no hard border on the island of Ireland while providing for checks at ports and airports for goods travelling into the North from Britain. The result of this was the publication of the Internal Market Bill.

Incidentally it was reported in recent days that hauliers who want to access Dover to travel to Calais in France will now need special permits to enter the English county of Kent. Where stands the DUP on this important issue?

In addition opposition to the British government’s unilateral decision to break international law by introducing its Internal Market Bill is growing. Unless there is a significant shift in policy by the Johnson government it’s difficult to see how a full-blown economic and political crisis between Britain and the EU, with the island of Ireland suffering substantial collateral damage, can be avoided in the next three months – the deadline for a trade deal.

Last week the Assembly and the Seanad both voted in support of the Withdrawal Agreement and Irish Protocol and rejected the Internal Market Bill being proposed by the Conservatives. The Tory government has admitted that this Bill will breach international law by breaking the Irish Protocol – an agreement it signed less than a year ago with the EU.

The Bill is a serious threat to the Good Friday Agreement. The Committee on the Administration of Justice, the Equality Coalition and Unison, as well as Ireland’s Future, have all criticised it. Last Thursday the four anti-Brexit parties in the Assembly – Sinn Fein, the SDLP, Alliance and Green Party – travelled to Dublin to meet the Minister for Foreign Affairs Simon Coveney. There was agreement on the need for the Withdrawal Agreement and Irish Protocol to be implemented in full.

All of this simply points up the importance of planning for our future. This includes advancing the debate on Irish Unity; securing the referendum on Unity and winning that referendum. English self-interests are not Irish national interests. It’s time for the Irish government and parties committed to the reversing of Brexit, insofar as it effects the people of this island, to include the need to plan for Irish Unity in their deliberations.

An escaped slave in Ireland

THE killing of African American citizens amidst the tension of a Presidential election in the USA has brought the issue of racism centre stage in that country. The Black Lives Matters campaign has contributed to a growing awareness of the depth to which racism exists not just in the USA but also in Britain with its colonial past, and elsewhere in the world, including here in Ireland.

Among those I have long admired for his courage in opposing slavery and who has strong connections to Ireland, is Frederick Douglass.

175 years ago in September 1845 Frederick Douglass arrived in Ireland. Douglass had been born into slavery in Maryland and escaped. That year he wrote an autobiography of his life: ‘The Narrative of the Life of Frederick Douglass, An American Slave’. It was a best seller but as an escaped slave Douglass was now at risk of being kidnapped and returned to his slave owner. So, like so many of my generation, he went on the run.

He toured Ireland extensively and lectured on the evils of slavery. He visited Belfast four times.

Douglass’s close association with Belfast should be a matter of great public pride. It is a part of our history that needs to be told and retold. It is also a reminder that the evil of slavery still has to be ended. There is currently an effort under way to have a statue erected to Douglass. I wish those involved well in their endeavour. Speed the day.

But a lad of eighteen summers

THERE are few songs of Ireland’s long struggle for freedom that are as well known as ‘Kevin Barry’. In times past it has been sung by almost every Irish folk group, including the Clancy Brothers and The Wolfe Tones. International singers have also recorded it. Leonard Cohen and Paul Robeson, the African American singer, actor and civil rights activist, each sang a version of it. Robeson’s video can be seen below

Its popularity was such that during the recent years of conflict RTÉ – to its shame – banned it along with many other republican songs of struggle.

In Mountjoy jail one Monday morning
High upon the gallows tree,
Kevin Barry gave his young life
For the cause of liberty.
But a lad of eighteen summers,
Still there's no one can deny,
As he walked to death that morning,
He proudly held his head on high.

100 years ago last week, on 20 September 1920 Kevin Barry was captured following an attack on a British Army lorry. Three British soldiers were killed in the ambush.

Barry was aged 18 and a medical student at University College Dublin. He was assaulted by British soldiers after his arrest and was subsequently tried by court martial on the 20 October. He refused to recognise the court. That evening the sentence of the court martial was read out to him in his cell. He was to be executed on 1 November.

A massive political and publicity campaign commenced to save his live. The British government ignored this and on 1st November Kevin Barry was hanged in Mountjoy Prison.

For the cause he proudly cherished
This sad parting had to be
Then to death walked softly smiling
That old Ireland might be free.
Another martyr for old Ireland;
Another murder for the crown,
Whose brutal laws to crush the Irish,
Could not keep their spirit down.
Lads like Barry are no cowards.
From the foe they will not fly.
Lads like Barry will free Ireland,
For her sake they'll live and die.

To mark 100 years since his death members of his family and the local community in Tombeagh, Hacketstown County Carlow established the Kevin Barry Commemoration Committee. It intends that the “centrepiece of the centenary event will be the unveiling of a lifesize statue of Kevin on the Rathvilly village green in County Carlow”.

The Committee have established a go fund me page at: gofundme.com/f/kevin-barry-commemoration-2020