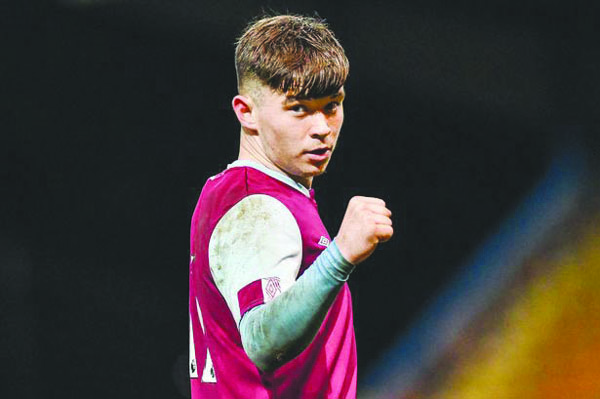 Chris Conn-Clarke is hoping to secure a new contract at Burnley. The West Belfast teenager is nearing the end of a two-year scholarship at Turf Moore. Picture courtesy of Burnley FC

A WEST Belfast teenager is making his presence felt at Premier League outfit Burnley FC as he seeks to secure his immediate future at the club.

Chris Conn-Clarke, who started his football career at Immaculata, his nearing the end of a two-year scholarship at the club and has hit top form at just the right time.

The 18-year-old turned in a man-of-the-match performance in last week’s 3-0 win over Mansfield in the FA Youth Cup.

Con Clarke stated that he was “delighted” with the result and is determined to make the most of his opportunity at the club, having been overlooked by Liverpool earlier in his career.

“I think I must have been about eight or maybe even younger when I first went to Immaculata,” said Conn-Clarke.

“We lived in the Lower Falls/Divis area so Immaculata are the local team and I stayed three or four seasons with them before joining Linfield. I played for them for two years before moving to Glentoran. When I was at Linfield, I attended the Liverpool Academy in Belfast.

“I had trails with Liverpool, but I didn’t get the decision I wanted. They didn’t give me a contract, but they passed my name on to a few clubs and I went to Burnley.

“I remember my trail for Burnley was against Barnsley on this cold, rainy day. I just ran my heart out and, thankfully, it was enough to earn me a contract and I was delighted with the opportunity.”

Moving away from home at 16, the former St Mary’s CBGS student admits to feeling a little bit homesick during his first few months in the north of England.

However, he credits The Clarets with helping him adjust to his new surroundings.

“It was weird for the first few months not being around your family,” said Conn-Clarke.

“You aren’t seeing your mates and it is a strange environment, but you have to get used to it. It is your dream as a kid to go and play football. My performances on the pitch helped as well.

“Off the pitch, I thought I would have struggled because I am an Irish lad in with these English kids. I was quiet when I first came to the club, but my confidence has grown and I’ve started making friends at the club.

The Belfast native hopes his stellar performances this season will help him land a new contract at Turf Moor.

“My first goal is break into the U23 squad and get playing for them week in, week out,” he added.

“My deal ends at the end of the season, but our decisions will be made at the end of March. That’s will when I will find out if I’ll get a professional contract or not.

“This is the main stage of the scholarship - we have to show we’ve improved enough to be brought into the U23 squad.

“I would be delighted if Burnley offered me a contract - it is a great club to be at. I’ve also been lucky enough to present Northern Ireland at U17 and U19s level and it is an honour every time I put on the jersey.”

It seems inevitable that Conn-Clarke will add to his 26 caps for Northern Ireland and it would also be no great surprise if the prodigious winger steps out at Turf Moore in the Premier League in the coming seasons.