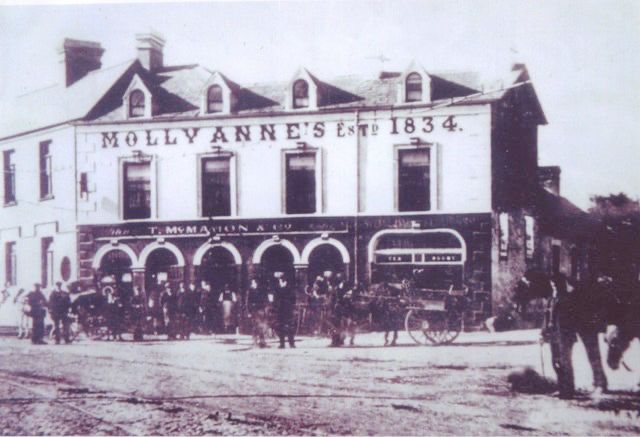 WHEN the body of Colonel Smyth who had been murdered in Cork was brought to his hometown, Banbridge, on 21st July 1920 for burial, anti-Catholic feelings grew quickly. Catholic businesses were attacked and Catholic workers evicted from the mills in which they worked.

The trouble spread to Dromore and to Lisburn. On Saturday 24th July serious rioting took place in Lisburn with several Catholic bars being attacked and stock stolen.
Five men were charged at the petty sessions where DI Swanzy, prosecuting, agreed with a defending solicitor that a lenient view should be taken.

“In these particular cases, I think if your worships put the defendants under a rule of bail it would do more to keep the peace than anything else.”

The RM George McElroy, said he had considered giving the defendants six months jail but on the recommendation of DI Swanzy he bound them over and they were all released. The burning and looting of Catholic businesses and homes were of little consequence to Swanzy whose court appearances had already come to an end.
At around 1pm on Sunday 22nd August 1920 DI Swanzy emerged from behind the closed doors of a public house in Smithfield, Lisburn to mingle with the congregation coming from the Cathedral when he was shot and killed by members of an IRA unit who made their escape towards Belfast in a waiting taxi. DI Swanzy had been accused of being implicated in the murder of Tomás McCurtain, the mayor of Cork. He had been transferred north, first to Downpatrick and then to Lisburn for his own safety.

When news of Swanzy’s murder spread, hordes of people led by the UVF took to the streets and knowing about the lack of action from the police in the riots in July they took to burning Catholic owned pubs, businesses. Over three days they drove over 1,000 Catholics from their homes.

The 14 policemen from Lisburn’s three barracks launched just one baton charge but were largely spectators as the violence continued. Reinforcements arrived from Belfast under Commander Harrison but they were not interested in crowd control and returned to Belfast. The urban council met on Sunday afternoon did not initially request any police reinforcements or troops to restore order. Instead they asked for volunteers to help them and some clergy to make their fellow townsfolk “have sense”. They succeeded in getting less than 20 volunteers.

When troops arrived they took up guard duties but when outwitted by the horde they joined the police as spectators.

Subsequent claims for damages amounted to £810,000 which in today’s currency would be in the region of £50 million. Incredibly, local newspaper reports dwelt on the seriousness of the amounts claimed rather than dwell on the number of Catholic families burnt out of their homes.

There was friction between the chief magistrate and the chairman of Lisburn Council. Mr McElroy complained about the lack of security cover over three nights rioting and plunder while the council chairman Dr McGeorge retorted that the RMs should have been present and reminded him of the Herculean efforts of himself, councillors and clergy.

Police reports stated that several thousands went on the rampage for three days and three nights and yet only seven men were brought to court to face charges.
William McMaster was charged with rioting. Sergeant Rourke deposed that he saw the defendant roll a beer barrel out of Brown’s public house into Graham’s Gardens. He knew the defendant for years. He recognised him and saw him rolling the barrel. Constable Kelly was with him and there was a dense crowd at the place, and only two policemen, and the latter were powerless.

Mr Allen, defence Solicitor, asked him if he was sure he hadn't made a mistake. I am.
Although by your own admission there were thousands there.
– Yes.
Do you know, as a matter of fact, that McMaster served in the army up till 1919
– I do.
Both Sergeant Rourke and Constable Kelly were adamant that they had not made a mistake identifying McMaster. Robert McMaster was called to the stand and told the court that he lived with his brother, the defendant, and his sister. His brother “on ten Sundays out of twelve would go to Belfast. On Sunday 22nd August he left home about 12 o’clock. His brother-in-law lived at Hartwell Street (off Antrim Road) and defendant went there. He did not come home until Monday.”

Thomas Logue, housepainter from 6 Hartwell Street, Belfast was brought to the stand. He told the court he was married to defendant's sister. On Sunday 22nd August defendant had arrived at his house. “About 6 o’clock we heard about DI Swanzy’s murder from a neighbour. After tea we went to Glengormley.”

Defendant slept in his house that night as he had a little liquor. “He was in my house on Monday morning when I went to work.”

Mr Allen told the court he could call the witness’s wife and sister to corroborate his evidence.

McMaster enlisted in 1907 and had been called up in 1914. He had served in France and had been in every engagement of an important nature. He knew Sergeant Rourke and Constable Kelly for years and had great respect for them. He held they had made a mistake in identifying McMaster, not a wilful mistake, it was an honest mistake.

Having regard to all the evidence their Worships were entitled to give McMaster the benefit of the doubt and dismiss the case.

Their Worships retired to their own room and after a long absence, Mr McElroy, after reviewing all the evidence said that if he convicted the defendant, they must also convict the brother-in-law for downright perjury, and they thought that would be a serious thing to do. They were bound therefore to dismiss the case on the merits without casting the slightest reflection on the witnesses for the prosecution.

William McMaster was extremely lucky to beat the court. His brother-in-law was obviously referring to Molly Anne’s pub in Glengormley which did a roaring trade then on Sundays for bona fide travellers who had to produce tram tickets. The doorman at Molly Anne’s asked everyone where they were from and where they slept the previous night. Had the doorman been summoned to court McMaster might not have been too happy.

In late 1919 Molly Anne’s was purchased by Laverty Brothers who were owners of several public houses. Around the same time in the bye-election of East Antrim Major Moore was the candidate representing the Unionist Party while George Boyle Hanna, a barrister, was described during the election campaign as a Democratic Unionist (this was seven years before Ian Paisley was born) opposed him. Hanna held a famous meeting in the Skating Rink in Glengormley which was attended by many ex-servicemen. He defeated the official candidate and before he was introduced to Westminster, Sir Edward Carson made him a member of the Unionist Party. Just a few weeks before Swanzy’s death, Hanna asked the Chief Secretary for Ireland a question in parliamen: “Was the Chief Secretary aware that on a recent date a raid by the military and police forces was made on the premises of Messrs Laverty Brothers at Glengormley and if he would say what were the objects and results of the raid?”

Sir Hamar Greenwood in his reply stated that the premises were raided, as stated, as the military had information that arms and ammunition were concealed there, but no arms or ammunition were found.

Had the result of this raid been positive it is likely that Molly Anne’s would have suffered a similar fate to the 17 Catholic owned pubs in Lisburn. McMaster’s alibi would have been more preposterous leaving RM McIlroy in an even more awkward position.

In all just five men were found guilty and on appeal their sentences were suspended.
Sir Ernest Clarke was appointed as Under Secretary in Belfast in readiness for the new Northern Ireland parliament coming into being the following year. Clarke was summoned to Lisburn and left in no doubt that unless all impending prosecutions were abandoned there would be more serious trouble in Lisburn. Clarke wrote to Dublin Castle requesting that prosecutions in Lisburn should be abandoned. A draft of a letter states that community relations were good in Lisburn at the time of Swanzy’s death, a local Catholic GP had the biggest practice in the town and there were 17 Catholic owned public houses. (He didn’t say that all of them had been burnt out and looted of their stock.) “The convictions that have been obtained have been forwarded on the evidence of a Sergeant and a Constable who are Catholics and there is a suspicion, quite uninformed I admit – but still existent – that this evidence is biased.”

All prosecutions were eventually dropped.